Feeding a city like Bengaluru, that has 1.25 crore people is a huge challenge, and provides millions of business opportunities as well. The vegetables and fruits grocery business is a major part of this industry. It requires a solid supply chain to supply fruits and vegetables to the city from the surrounding areas and beyond, as they are perishable.

There are thousands of vendors selling vegetables across Bengaluru, who set up shop on pavements or small stalls, or use a push cart. 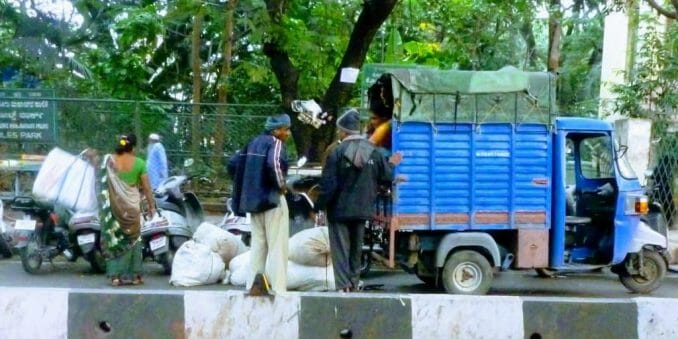 For these two couples living in Kammanahalli, the day starts around 3am. They travel in a hired auto tempo, the husbands are dropped off en route to set up shop at the local BBMP park while the women reach KR (City) Market by 4am. They make their purchases and get back to the park by 6.30am, quickly unload the vegetables and display them. Till 9.30am they sell what they can. Once the park closes, they load the remaining vegetables on the pushcart and go to different high-rise apartments nearby, finishing by noon and heading home. 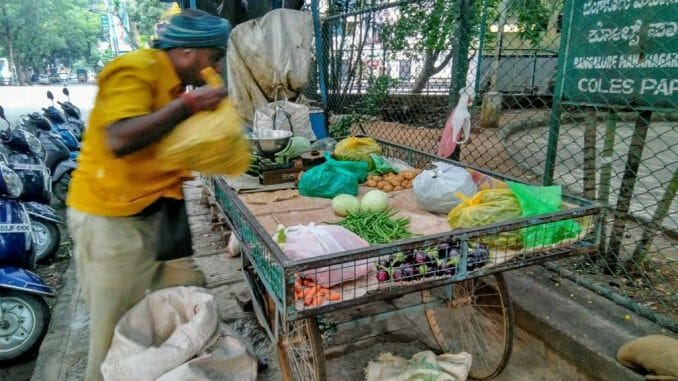 Once upon a time, Bengaluru city used to get its vegetables from surrounding villages like KR Puram. Now few areas are available for cultivation after the city has expanded way beyond even the BBMP limits of 800 sq km. Even where they are, like at Varthur or Byramangala, the land is heavily contaminated thanks to the pollution of nearby lakes. Still some produce, such as leafy vegetables (soppu), are grown there and do get sold.

Much of the vegetable supply to the city is managed through multiple channels — HOPCOMS, APMC and other informal markets.

Horticultural Producers’ Cooperative Marketing and Processing Society Limited (HOPCOMS) has farmer members from Bengaluru Urban, Kolar, Chikkaballapur, Ramnagar and Bengaluru Rural, who supply upwards of 70 tonnes of vegetable and fruits everyday. HOPCOMS has its own shops from where it sells vegetables at a fixed price. Tomato comes from from Kolar district, flat beans (avarekai) from Chintamani, Srinivaspura and Ramnagar and greens from Anekal.

Karnataka’s Agricultural Produce Marketing Committees (APMC) market is where farmers sell their products to registered commission agents (middlemen). It also gets produce from other parts of India as well as other parts of the state like primary markets in Mandya, Mysore, Ramnagar, Doddaballapur, Chickballapur, Magadi, Hoskote, Sidlaghatta, Aneka, Malur and Kanakapura.

Madivala market and KR Puram market are the other places which sees farmers from south of Bengaluru (Attibele, Hosuru, Anekal, Malavalli and Kanakpura)  and East of Bengaluru (Hoskote, Malur, Narasapura, Sulibele, Chintamani and Kolar) respectively.

This is the scene at the local market around 8 am. Trucks are unloaded, wares laid out. Early buyers, office goers, other traders make their purchases… All this, while the market indoors is being set up! 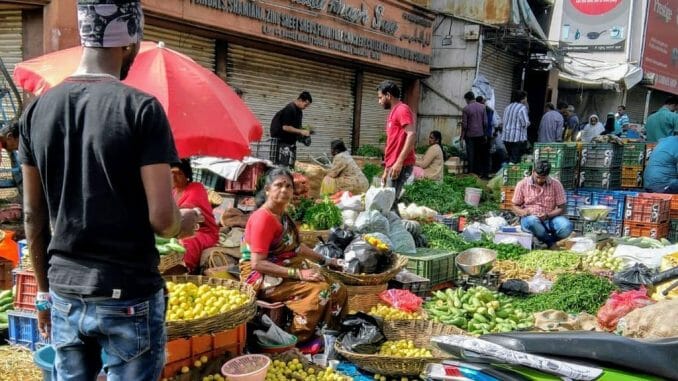 Meanwhile deregulation in the last few years has allowed bulk buyers like Safal, Reliance or Big Basket to buy directly from farmers. 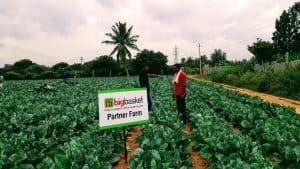 “For the online delivery business, the vegetables go through a process before they reach us”, says Vipul Mittal, National Head, Fruits & Vegetables at Big Basket. He tells me this includes their agronomist advising the farmers on best practices, farm inputs (organic or otherwise), quality check, sorting, grading and loading. Their partner farms are spread across the country. For instance, they get the tomatoes and greens from Malur and Chikaballapur near Bengaluru, while onions come from Nashik in Maharashtra. Potatoes come from Agra in U.P. Many fruits like Mosambi, Watermelon, Melons and Papaya come from Anantpur in Andra Pradesh. 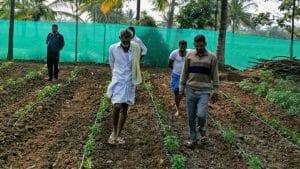 In addition to this, local organic shops tied up with farmers who commit to sending organic produce directly to their retail outlets. Given the difficulties of certification, especially in the smaller farm space, many such outlets say they verify if the produce is ‘organic’ themselves. 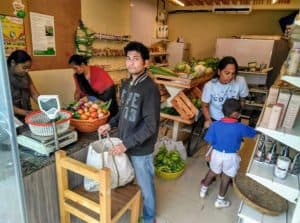 At the local organic store in Frazer Town, Organicz4u, fresh and seasonal vegetables and fruits come in twice a week from farms nearby. Parvez, one of the partners at the store, shares that this is a challenge for some customers who find it difficult to plan their buying only on such days.

Parvez says he tries to get produce from those farms which are as close to Bangalore as possible, “Vegetables and fruits come mostly from Devanahalli and I sometimes get some stuff from Ooty also.”

All in all, the city gets over 2,000 tonnes of vegetable everyday from different places within the state. The vegetables are sold within 24 hours and the cold storage facilities are limited only to a few supermarkets.

With inputs from Meera K.

Number of breakdowns seem to have reduced among BMTC buses. How did it happen? What changed within the BMTC administration to achieve this?

A community garden flourishes in this IT campus

That’s why the national seminar on organic terrace gardening was held at the University of Agricultural Sciences in Hebbal, which was attended by over 100 participants.