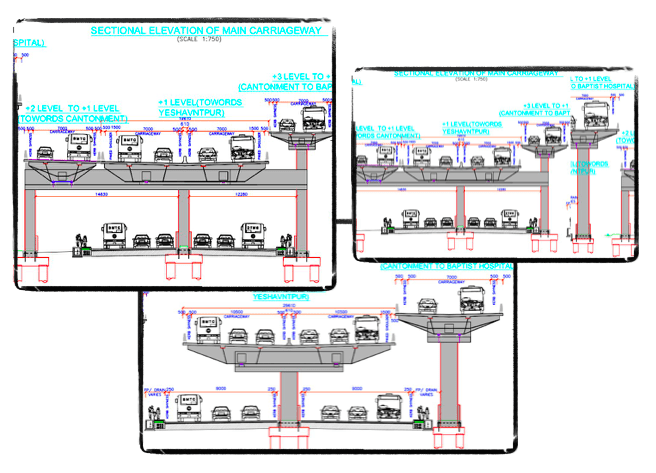 Anyone who lives in Bengaluru is keenly aware of the high levels of traffic congestion here. People are forced to spend hours stuck in traffic jams. A 2017 study by the cab aggregator Ola had found that Bengaluru had the slowest-moving traffic in India, with average speed on some roads, like the Outer Ring Road (ORR), dropping to a measly 4.4 km/h, slightly lower than the average walking speed!

One of the main constraints on road capacity is junctions where there are conflicting turning movements. For example, if you wish to turn right and the vehicles travelling in the opposite direction towards you want to go straight, one of you has to stop and wait for your turn.

Unsurprisingly, this adds substantially to journey time. One solution to this is ‘grade-separated’ junctions where bridges and underpasses are built to enable vehicles to keep moving in their desired direction, without having to cross oncoming traffic.

Taken a step further, this is the essence of the ‘elevated corridors’ project proposed by the government. The elevated corridors connecting the suburbs to the city centre and to each other, are meant to enable seamless, stop-free travel between any of the corridors’ entry and exit points. 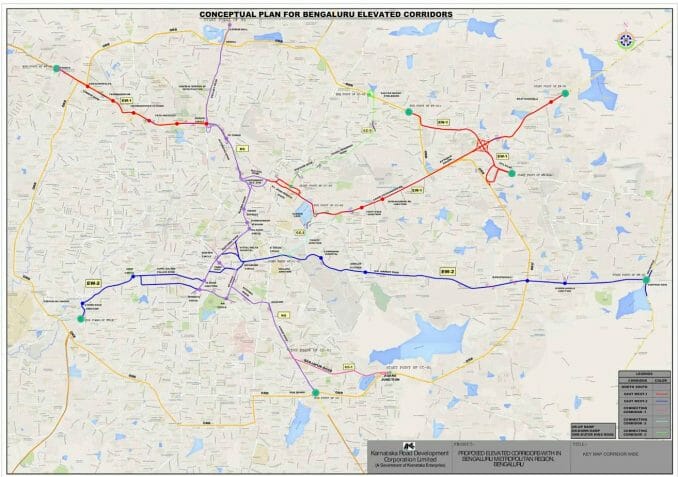 The controversial project has been temporarily put on hold by the Karnataka High Court yesterday, pending the disposal of a case on the Metropolitan Planning Committee (MPC). MPC, the statutory body responsible for city planning and approving major projects like the elevated corridor, has been almost dysfunctional.

What exactly is the elevated corridor? Here we explain the project based on a set of documents (including the feasibility report and tender documents) that describe it in greater detail.

What is the route?

Although a route map has been provided, there are conflicting figures for the total length of the elevated corridors – 92.2 km, 97.145 km and 102.04 km are all quoted in different places. Nevertheless, they consist of a 27 km north-south corridor, two parallel east-west corridors of approximately 30 km length each, and three additional connecting corridors.

But it is simpler to think of it as a central loop with four corners – at the eastern end of Ulsoor lake, at Cantonment Railway Station, at Richmond Circle and at D’Souza Circle – which then connects to several radial routes. 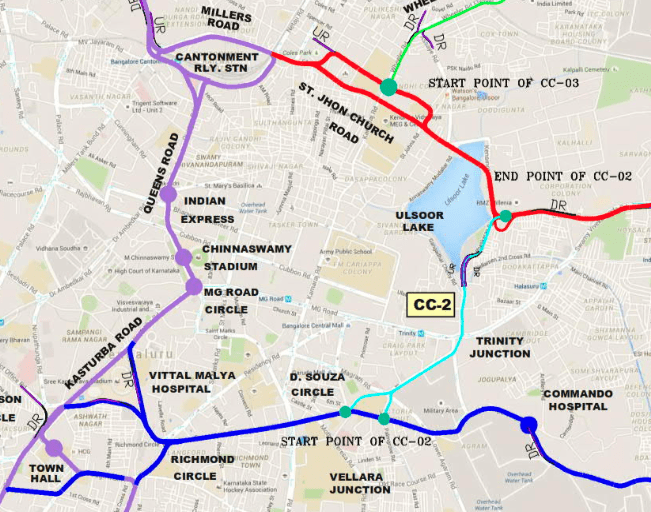 At the north-western corner of the loop, there is a road from Cantonment Railway Station to Mekhri Circle where it splits in two, with one branch going west to Peenya along Tumkur Road, and the other going along Bellary Road to Esteem Mall. 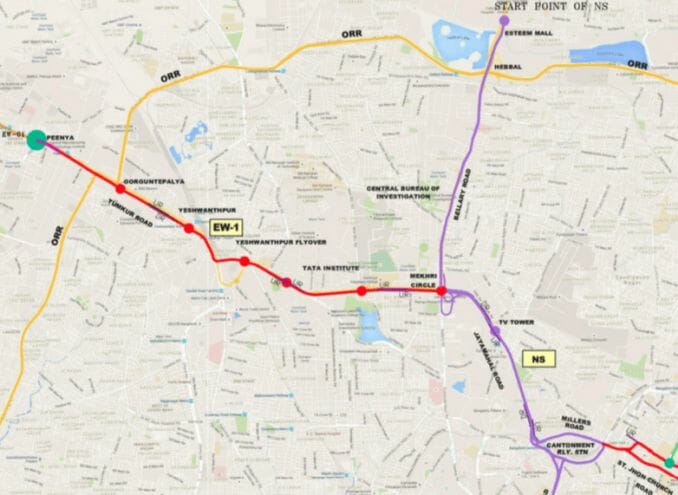 Traversing the loop clockwise, before we get to the north-eastern corner, there is a road (CC-3) connecting Wheeler’s Road to Kalyan Nagar on the ORR. Further along the loop, at its north-eastern corner itself, there is a corridor from the eastern end of Ulsoor Lake that goes along Swami Vivekananda Road, through KR Puram, terminating well beyond KR Puram and connecting to the Bengaluru-Tirupati Highway. Traversing this corridor, there would also be a relief road along the ORR bypassing the heavily congested KR Puram Bridge. 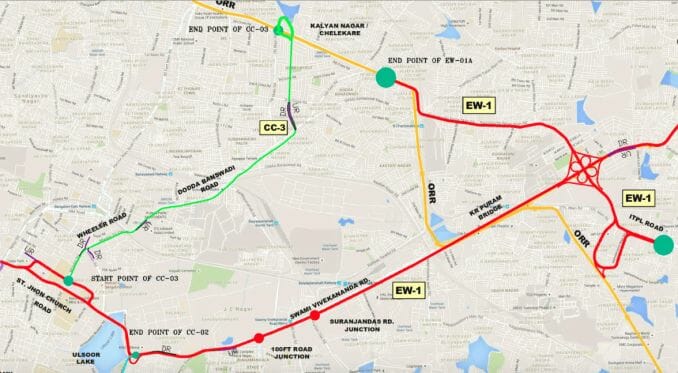 The first one runs east to Adugodi, and thence along Hosur Road terminating at Silk Board. This will add more road capacity entering in to the already heavily congested Silk Board Junction, but there is no provision for relieving Silk Board Junction. An additional short road (CC-1) branches from Hosur Road, goes along Sarjapur Road and ends at Agara Junction.

The second radial (EW-2) runs through Chamrajpet, and then along Mysore Road, but strangely, terminates before the ORR, seemingly in the middle of nowhere. 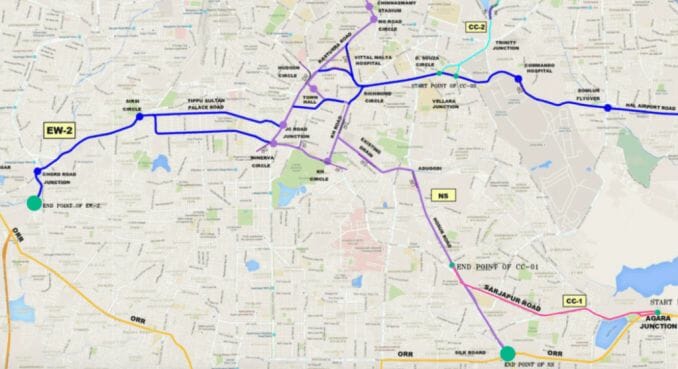 Most of these elevated roads, with a few exceptions, terminate in densely populated urban and suburban areas. Hopefully, adequate studies have been carried out to assess the impact on local, surface roads at the terminating points of these corridors.

Also, elevated corridors will attract traffic that currently uses the ORR because, unlike the ORR, these would be fully grade separated and of much higher quality. Trips along these corridors will be shorter as well. This would not just create road capacity issues, but also increase the environmental impact in the city centre by funnelling more vehicles to inner city areas.

Not for “cattle and pedestrians”

The elevated roads are meant to be of four to six lanes, supporting speeds of 80 km/h. Remarkably, building them would only require fresh acquisition of 64 hectares (158 acres) of land.

The documents also include a set of drawings showing how the corridors will look once constructed. The main elevated road will be at what is called “+1 level” i.e., the equivalent of the first floor, one level above the surface road. When elevated corridors cross, the crossing road will be at “+3 level”, with “+2 level” reserved for ramps connecting the two corridors. Add this to the surface road, and we have a science-fiction-like 4-level road. In places where underpasses already exist, this would give us a 5-level road!

This is bound to create a rather intimidating environment for pedestrians. But the humble pedestrian has not been forgotten altogether. Section 2.10 of the ‘Schedules’ makes a mention of “Cattle and pedestrian” infrastructure in the same breadth, perhaps an official acknowledgement that pedestrians are truly considered ‘cattle class’!

Drivers too will have to learn to navigate the maze of ramps and interchanges at various levels to go to different parts of the city. If not, they run the risk of driving around in loops!

They should also have high levels of lane discipline to smoothly flow to their desired destinations, and to deal with the constant stream of vehicles entering and exiting ramps and interchanges. Sudden lane change or an impulsive rush to exit ramps could lead to dangerous collisions.

There are some provisions like CCTV cameras and emergency phone boxes, though the purpose of these have not been mentioned.

The project’s Environmental Management Plan sets out many measures to mitigate the impact on people and nature. For example, ten trees are to be planted for every tree felled, utilities should be relocated without hampering services, top soil is to be conserved, contamination of soil and water by oil or construction debris is to be strictly avoided, and contaminated water sources immediately replaced. There are also provisions for silencers and enclosures to prevent noise, and to ensure that air pollution does not exceed prescribed levels during construction.

If the project does go ahead, citizens will have to hold them up to these high standards!

About Vimal Simha 6 Articles
Dr Vimal Simha is an astrophysicist with a keen interest in urban issues and politics.

Lower your water bills with these simple steps

A change of a flush, a bucket bath, a dual sink, here are simple ways to conserve water in your own homes.

The dos and don’ts during a fire accident in Bengaluru

We list out simple measures can save your life in a fire emergency.

How industry-academia partnership can help increase employability in IT

The emergence of private organisations that offer skilling solutions is a perfect marker for the rising problem of unemployability among fresh IT graduates. What other solutions exist to the skill gaps clouding the job-worthiness of the new workforce in IT?