The Department of Urban Land Transport (DULT) has published a draft of the Comprehensive Mobility Plan (CMP) for Bengaluru Metropolitan Area. The document has brought back the controversial Elevated Corridor project (road-over-road), 92 km of which has been proposed at the cost of Rs 18,480 crore.

The CMP itself is necessitated by the centre’s Metro Policy which clearly states that funding for the Metro would require cities to develop a comprehensive mobility plan.

Here is a summary of the proposals in this plan.

Many of the new three-phase CMP project proposals are there in the earlier plans proposed in 2011 and 2015, with some of them at different stages of implementation. Like the Metro rail, suburban rail system, Bus priority corridors, bus fleet augmentation and peripheral ring road.

While the 2011 report talks about bus rapid transit system (BRTS), commuter rail to the suburbs, and densification of corridors along the stretch of mass transport system, the 2015 report drew plans for 341 km of mass transit corridors, 231 km BRTS and development of intermodal stations. Most of these proposals still remain on the paper. For instance, the BRTS, planned on the Outer Ring Road from Silk Board Junction to KR Puram, was scrapped in favour of the Metro. There is a bus priority lane currently in place in this section.

The new plan, prepared by the consultancy firm Infrastructure Development Corporation Karnataka (iDeCK), gives a glimpse of what the government intends to do over the next 15 years.

The CMP also chalks out six ways of raising funds – budgetary allocations from the state and centre, parking fees, congestion fees, PPP and so on. It also proposes the formation of a Bengaluru Mobility Management Authority (BMMA) with a legislative mandate to monitor its implementation. 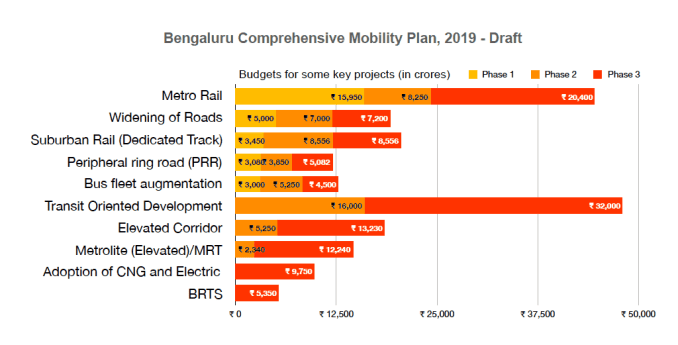 What is the current state of various transport projects?

While 42.3 km of the Metro is up and running, its second phase is a work in progress. This includes extensions to Whitefield from Baiyappanahalli, Mysuru Road to Pattanagere, Yelachenahalli to Anjanapura on Kanakapura Road, the Electronics City line, Nagasandra to Bangalore International Exhibition Centre and the Gottigere-Nagavara lines.

The BMRCL moved the KR Puram to Bengaluru International Airport (35 km) proposal from the Phase-3 to Phase 2(B) in order to hasten its implementation. Similarly the 18-km KR Puram to Silk Board line was also moved from Phase 3 to Phase 2(A). However, tenders have not been floated for the construction of these two lines.

Metro’s Phase 3, proposed to increase the network by over 100 km, is still in the planning stage.

The Rs 18,000 crore suburban rail project was cleared by the state government (earlier this year) and the Railway Board (recently).

The first bus priority lane, of 18 km on the Outer Ring Road, from Silk Board Junction to KR Puram, commenced recently.

The state government allocated Rs 1000 crore in its 2019-20 budget towards this long-awaited project. While around 800 acres of land is required for the project, the acquisition process is yet to commence. Initial surveys for acquisition are underway.

Fund allocation in CMP for major projects (in crores):

B Prasanna Kumar, INC, won the 2008 Assembly elections from Pulakeshinagar by a large margin. Learn more about this three time MLA’s assets, performance, issues and his involvement in his constituency