Talk about the Bangalore’s environment issues and most fresh on our minds are incidents involving lakes in the city, unabated and one after another. Be it the National Green Tribunal (NGT) pulling up companies for large scale construction between two lake beds, Bellandur lake on fire, foam build up on polluted Sarakki, Bellandur and Varthur lakes or actions like clearing ‘encroachments’ on lake beds; the state of the lakes and the environment makes us wonder how our city reached such new lows.

Various studies have shed light on the fact that while urbanisation led to environmental degradation, the rate has rapidly increased in the past few years.

The below figure shows the development of the city through the years, from the study. 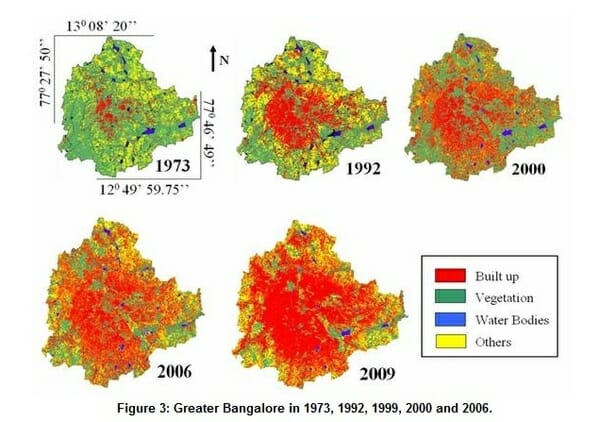 A visualisation from IISc study that highlights Bangalore’s growth.

Dynamics of Urban Residential Land Markets: A Case of Bangalore City, a study by IIMB, that mainly addresses land market assessments, also gives a background into the city’s growth. Some key points from the study about Bangalore’s growth are listed below:

(Ravindra, A. and Venkataraman, Madalasa and Edadan, Narayan and Masta, Dinesh Kumar, Dynamics of Urban Residential Land Markets: A Case of Bangalore City (July 7, 2012). Centre for Excellence in Urban Governance, 2012)

Lakes rejuvenation and groundwater recharge, solid waste management and resource recovery, traffic and air pollution management – whichever be the issue, what is evident is that a strong will from the State and Executive to legislate, implement, monitor and enforce laws is needed to slow down environmental degradation in our city.

5,000 trees to go for widening roads around Bengaluru, says Forest Dept. But is that all?

Though the Forest Department says 5000-odd trees have to axed for the ‘Bangalore Surrounding Roads Project’, data discrepancies makes this number suspect. Secrecy around the project has made citizen engagement nearly impossible too.

Campaign demands that Bengaluru stand with farmers in distress

Did you know parts of Karnataka received good rainfall only for three years since 2001? What is the status of the farmers in Karnataka? What can Bengaluru do to help them?