A few years ago, it was the purview of the neighbourhood RWA member (usually a retired old man) to raise civic complaints, from water pipe leaking to potholes. He would trudge down to the nearest ward office, and talk to the engineer responsible. He’d follow up and write letters to the MLA to escalate.
But now, average citizens are more conscious and quick to reach out to BBMP to raise issues. If you are stuck with a dead animal in front of your house, you’d call the helpline or use the BBMP Sahaaya app to get it removed.

A citizen complaint and feedback mechanism is also a key requirement to track accountability of local governments—a tool that is monitored by concerned officials, with the issues and status visible to senior officials as well as publicly.

In addition to Sahaaya’s own web interface and mobile app, BBMP’s integrated system accepts complaints from other apps like Janaagraha’s I Change My City, BPAC’s Spotter, Healthizen (Health department’s app), Mobile One etc., as well as those collected through letters to Commissioner, emails, Mayor’s office, telephone calls, Newspapers, SMS, social media, Spandana, walkie-talkie and Whatsapp.
Sahaaya is a software developed by a Bengaluru-based company, Indigo Systems in 2014-15. It was piloted in Malleswaram, with push from the local MLA Dr Ashwath Narayana, and later adopted across BBMP.

Last year, when we met Kumar Pushkar, the then Special Commissioner for Information Technology cell, he explained the time it takes to resolve certain type of issues. He said, “Some complaints need long term solutions or cannot be resolved immediately. It might take a year or two to close the complaint, specially if they require budget allotment etc. In such a case, the status of the complaint will be ‘long term solution.’”

The official process specifies that complaints are followed up by the call centre staff. Even if the work is completed, the status should remain unresolved till it’s closed. The complaint will be “closed” only after the call centre people call the complainant and confirm that the work has been done, explain BBMP officials.

However many citizens contest that. They say that in reality, issues are rarely addressed properly – only their status is marked closed. A few officers do call the complainant to understand the issues, but most don’t bother unless you escalate or are in touch with higher officials, feels Seema Sharma, who has filed many complaints related to garbage. Some citizen activists also observe that multiple complaints on the same issue, tend to get prioritised.

I raised two issues related to potholes and advertisement hoardings on Sahaaya two weeks ago. In a day, their status was changed from ‘Received’, to ‘Assigned’ to an official. One of them was “Transferred” to a second official. There it has been stuck ever since. 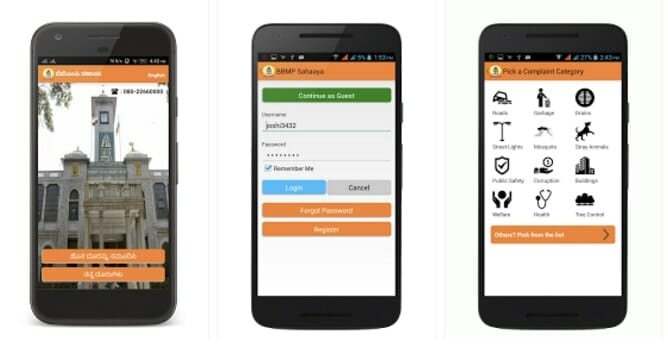 BBMP Sahaaya mobile app has over 10,000 downloads, and an overall rating of 3.0 on 5. BBMP says a “24×7 Call Center manages requests, follows up with concerned BBMP officers, tracks for resolution and closure.” On the download page itself, the app seems to have mixed reviews. The app crashed when I first selected a topic. After allowing access to location, it started working.

In 2011, BBMP website had linked to a grievance tool as part of the Global Project Management System (GPMS) developed by an NGO called ICST. This tool used to list all issues publicly and citizens could add additional comments to the complaints filed there. This system is not in use anymore. Another software is the eGovernments Foundation’s Public Grievance Redressal Tool. This is a comprehensive software capable of integrating with other systems; it is also an open source tool and is adopted by a number of municipalities.

Complaint-feedback tools are common standard software products and there are many free and open source tools. There are also quite a few specifically meant for municipal corporations and local governments (E.g. fixmystreet for councils from MySociety.org)

Can we target world class and open data?

Many cities that host an open data platform, for e.g Chicago (data.cityofchicago.org) gives the list of requests raised through 311. For e.g., see the list of pothole issues — 311 Service Requests Potholes Reported – this shows over 477,000 pothole requests from 2011 and their status!

Unfortunately BBMP does not share the data in an open format – one cannot download the entire list of issues and analyse it. Open data is a critical aspect for transparency in governance. The Sahaaya team says data, reports and analysis tools are available to BBMP internally. When that information is open to all, citizens and civic groups will get a better understanding of the status of their neighbourhoods and get empowered to demand more accountability from officials. Which is probably why the powers that be are reluctant do so!

Currently BBMP uses different sets of software tools for different needs – accounting, property tax management, trade licenses, khata, building plan approval etc. as well as organisational tasks like payroll, budgeting etc. Some of the applications like Fund Based Accounting System (FBAS) are developed by the Municipal Reforms Cell which functions under the Urban Development Department. Many others are developed by private vendors often on a voluntary basis.

A city corporation is a complex organisation – BBMP has a large workforce (more than 25000 as on 2014), provides multiple services in a city of 800 sq kilometres, deals with thousands of vendors and agencies and is accountable to 11 million citizens.

Such an organisation needs enterprise software, with integrated modules that streamline its operation and makes it efficient for officials to execute their work. The list of issues raised by citizens should eventually feed into BBMP employees appraisal system (and yes, they should have performance appraisal tools) and their timesheet management.

What BBMP needs is a Chief Technical Officer (CTO) and a Chief Information Officer (CIO) and a team of professionals who can help them create the specifications for BBMP’s requirements. Then BBMP can get it executed by the Municipal Reforms Cell or even private firms.

There is really no reason why Bengaluru – that claims to be the IT hub of India cannot do better!

In earlier articles in the Ground Reality series, we looked at cash shortage, food insecurity and domestic conflict in poor urban households during the lockdown. They are now trying to rebuild their lives. This is about how we can help.

There have been many trips where BBMP mayors and councillors wanted to learn about waste management in other cities. What is the output? Why are we still facing the crisis?