On April 14, BBMP war room bulletin had identified 38 wards as ‘hotspots’ for COVID-19 in the city. But the numbers have now come down to 32, as per the latest bulletins of April 15 and 16.

A ward is declared as a hotspot, if:

After the initial hotspot list was released on April 14, the data changed substantially. The initial list of  April 14 had 38 hotspots – 36 wards with positive cases, and two wards with over 50 people in active quarantine.

But in the bulletins released on April 15 and 16, the total number of hotspots suddenly dropped to 32 – some wards were removed, and new ones were added. Explaining the change, Dr B K Vijendra, BBMP’s Chief Health Officer (Public Health), said, “The number of hotspots dropped because there have been no active cases in those wards in the last 28 days. The list is dynamic and the data was updated.”

There were also major discrepancies in the total number of positive cases and affected wards. As per the April 14 bulletin, Bengaluru had 80 COVID-19 patients up till then, but this number dropped to 71 and 76 respectively in the April 15 and 16 bulletins. Surprisingly, the Karnataka state war room bulletin of April 14 said Bengaluru had only 69 cases then!

As for the number of affected wards, the April 14 bulletin said 41 BBMP wards had positive cases until then. But as per the next day’s bulletin, only 34 wards had been affected.

According to Dr Vijendra, these discrepancies arose because of the misreporting of residence in patient interviews. “Patients are often in a stressed state when we interview them. They sometimes report the wrong ward or even district. Many cases were not from Bengaluru Urban district,” he says.

BBMP has claimed that the bulletins released since April 15 are accurate. Since then, BBMP war room data has been in sync with the state data released by the Department of Health and Family Welfare. As per the latest data, Bengaluru has had 76 positive cases. Of these, 38 are active cases, 35 are recoveries and three are deaths. And overall, 35 wards have had positive cases.

Hotspot list doesn’t imply wards will be sealed off: Commissioner

Since the Centre’s Ministry of Health and Family Welfare (MoHFW) released its micro plan for containment in March, most cities followed a strategy of identifying containment zones around residences of patients and tracing contacts. Bengaluru started this exercise early and employed health workers for surveys in emerging hotspots.

More recently, hotspots are witnessing more stringent measures. Last week, in Bengaluru, Padarayanapura and Bapujinagar were  ‘sealed off’, completely restricting movement and shutting down even essential services, leaving the task of delivering these to civic bodies.

After BBMP published the hotspot list on April 14, there have been apprehensions that these wards too would be sealed off. On April 14, BBMP Commissioner Anil Kumar tweeted, “There are rumours floating on social media once again that more areas will be sealed down today. I wish to reiterate that this is totally false & no such decision has been taken”.

On 15th, Kumar tweeted again to clarify that the hotspot list was dynamic and was only meant to educate citizens. Dr Vijendra says, “Bapuji Nagar and Padarayanapura wards were sealed off because there were a high number of cases in a short period of time. We can’t predict which areas will be next, but that is the criteria”.

Most cases now in South and East zones

Though there only 32 hotspots, COVID-19 cases have been reported from 35 wards overall. While the latest bulletins don’t provide data for each ward, the April 14 bulletin had showed that Azad Nagar was the most-affected, with five patients. JP Nagar, Singasandra and Ramakrishna Temple wards came next, with four cases each. 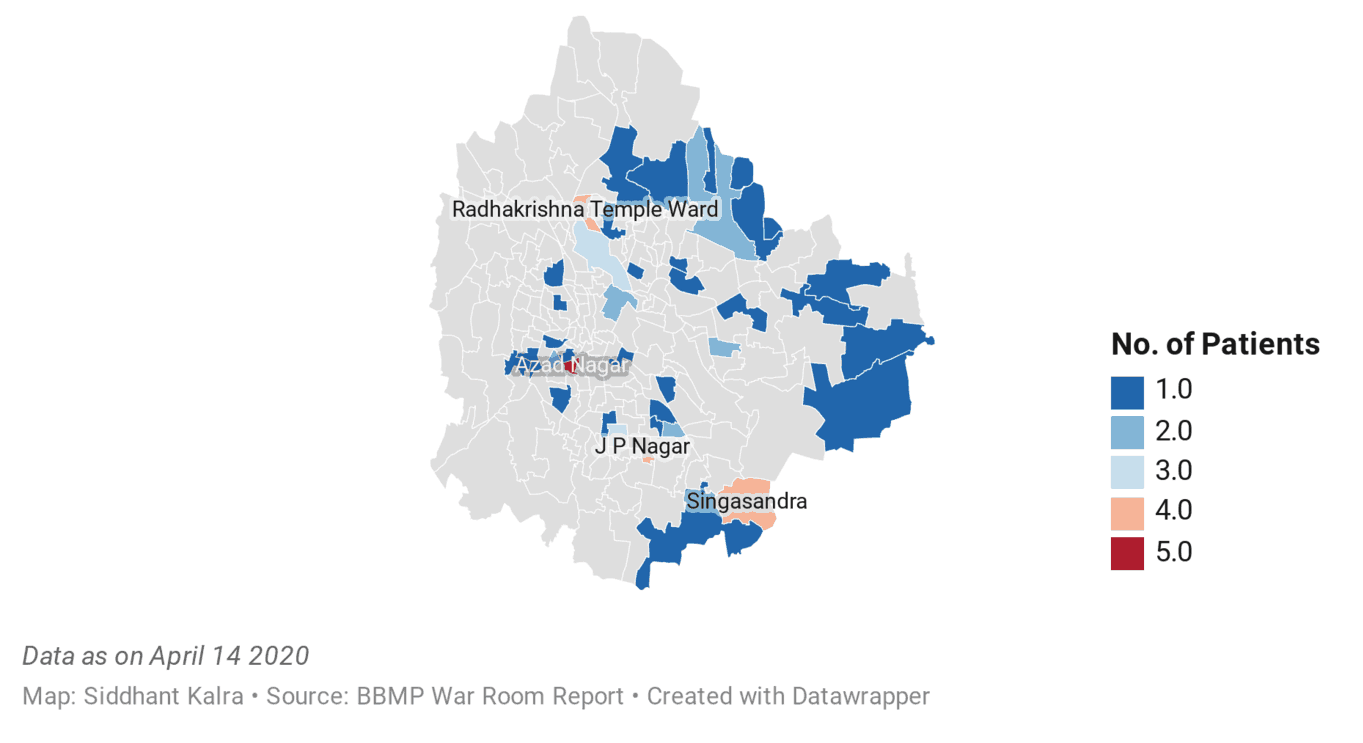 Considering zonal data, the South and East zones were most affected, with 17 and 16 cases respectively. These zones also have the highest number of hotspot wards – nine each. Dasrahalli zone has not reported any positive case. Mahadevapura zone has the best positive-to-recovered ratio, with 10 positive patients and seven recoveries.

Most wards in the city, however, remain completely unaffected. Of the 198 BBMP wards, 163 have no recorded coronavirus patients.

Of the 35 wards where cases have been reported, 22 wards have only one case each. 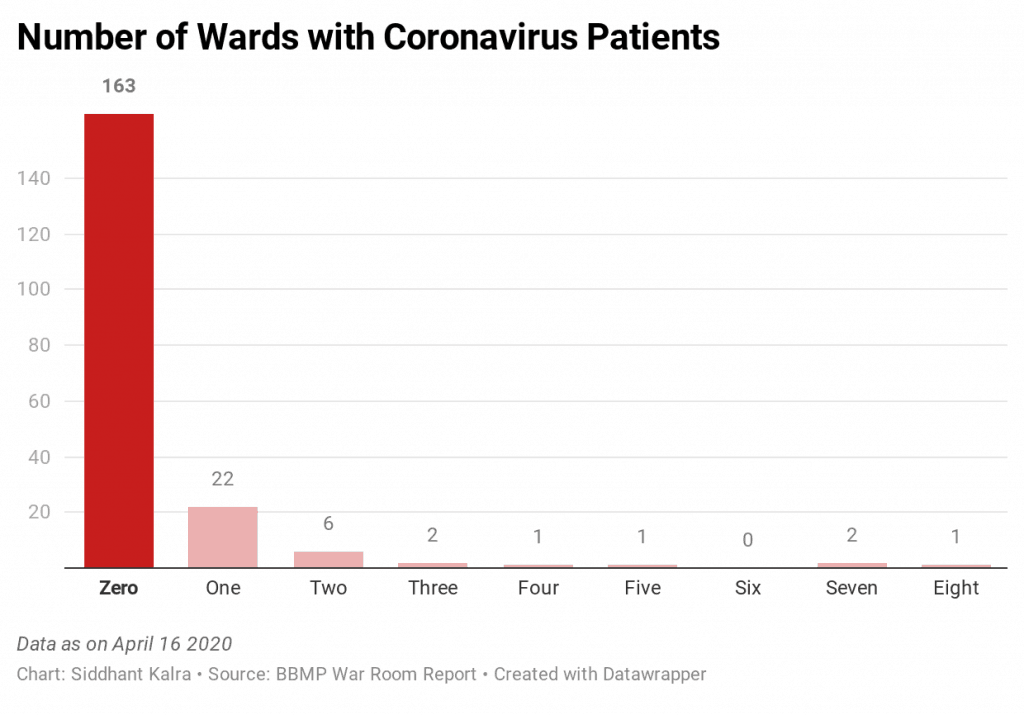 According to the bulletin, Bengaluru still ranks lower in the number of patients compared to many other Indian cities. For instance, Delhi, Mumbai and Chennai have recorded 1578, 1863 and 219 positive cases, compared to 76 in Bengaluru.

[Addendum: You can find updated data on cases and hotspots at http://covid.bbmpgov.in/bulletin.html.]

The city owes much, in terms of dignity, pay and benefits, to crematorium and burial ground workers, especially in the pandemic, the report recommends.

COVID-19 lockdown: Migrant workers counted again and again, but where is the relief?

Authorities have stubbornly refused to acknowledge the number of migrant workers in Bengaluru. Despite multiple surveys of workers, food supply has been erratic. Even when food is distributed, it could be unfit for consumption.

Updated rules for inter-district, inter-state and international travellers, as on May 26.