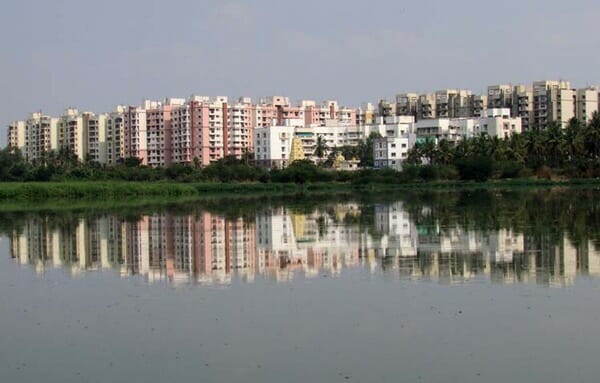 Karnataka State Urban Development Department and the Bruhat Bengaluru Mahanagara Palike (BBMP) submitted an unconditional apology and undertaking in the National Green Tribunal (NGT) hearing held on April 19, 2017, promising to withdraw the circulars and letters that termed the NGT a ‘quasi-judicial body’.

This could affect the legalisation of hundreds of building plans, residential and commercial, that followed old buffer zone rules and got sanctions, some of them even before the NGT rule came into effect. The occupancy certificate and completion certificate may be hard to obtain, if the new NGT rule is applicable for all the projects that are in progress. It will also be difficult to get the plans sanctioned for the new projects in authorised layouts falling in new buffer zone, even though the layout and sites were authorised according to old rules.

The circulars by the Urban Development Department were clarifying the retrospective applicability of the NGT order on new buffer zone, but the Tribunal found the language unacceptable, and asked that the government bodies withdraw the entire clarification.

When the NGT came up with the landmark new buffer zone rule in May 2016, almost entire real estate sector was under confusion. The builder affected directly by the rule, Mantri Techzone Pvt Ltd, had approached the Supreme Court asking for a stay on NGT order, but the Supreme Court did not stay the order.

After the Karnataka State’s legal department clarified that many of the NGT’s rules are applicable for all builders and all lakes, many builders approached the State Government asking for more clarification on specific cases. The State Government also approached the Supreme Court seeking more clarity, and the legal proceedings are on. Meanwhile, the government went back to seek legal opinion once again.

In a circular dated February 16, 2017 issued to BBMP, the Urban Development Department said that the Department sought legal opinion on following cases, with regard to NGT’s new no-development buffer zone order issued on May 4, 2016.

The Legal Department had opined that since the National Green Tribunal did not specify that the buffer zone rules are going to be applicable retrospectively, the rules will be applicable only in the future. So, the above three cases will not fall under the new buffer zone rule specified by the NGT, and will not be considered illegal if the rules at the time of getting applicable sanctions have been followed.

Without stopping at that, the Legal Department went on to state this (translated summary from Kannada): “The NGT is a quasi-judicial body, and such tribunals have no power to frame laws. The NGT has never specified anywhere that the laws framed by the state government’s legislative body and plan sanctions accorded can be overruled by the NGT’s new rule. Therefore not allowing the construction to happen citing NGT order, for the building plans already sanctioned would become illegal.”

The circular thus concluded that the NGT order of new buffer zones is NOT applicable for the plan sanction applications for the sites in partially developed layouts sanctioned by a competent authority. Subsequently, the BBMP issued the same notice to all its officials, on March 30, 2017, for clarification.

During the hearing conducted on April 18, 2017, the Tribunal came down heavily on the State of Karnataka for clarifying the NGT’s May 4, 2016 judgment on lake buffer zones. “The Tribunal was distressed with the language used in the circular and fumed at the counsel representing State of Karnataka saying “by what authority have you clarified our judgment”, says a press note from Namma Bengaluru Foundation that brought the issue to the notice of the green court. The NGT also directed all the concerned officials who approved and issued the same to be present in the hearing held on April 19, 2017.

In the hearing conducted on April 19, 2017, the BBMP represented by Joint Commissioner Sarfaraz Khan and the Urban Development Department represented by principal secretary Mahendra Jain submitted affidavits tendering unconditional apology and undertaking to withdraw both the circulars with immediate effect.

The Tribunal said that it was not a quasi judicial body, but has been described as Civil court in the NGT Act. Any attempt to interpret the NGT orders in future, if not brought to the Tribunal’s notice, would be subjected to contempt proceedings before the Tribunal, and usage of “impertinent language” is not acceptable, warned the Tribunal, adding that the opinions expressed in the BBMP Circular and UDD letter are in complete contrast to the Tribunal’s judgment.

With this, the confusion on the NGT buffer zone rule continues to prevail even after almost an year of issuing it. Neither has there been any clarification by NGT on the retrospective effect, nor has the government been allowed to get legal clarification.

The National Green Tribunal issued an interim order on April 19, 2017, in the suo motu case on fire and froth in Bellandur lake, directing all industries in the vicinity of Bellandur lake to close down operations with immediate effect. The green court also banned dumping of municipal solid waste, domestic waste and construction waste in the lake and the buffer zone prescribed by the NGT. Such dumping and polluting is liable to environmental compensation of Rs. 5 Lakhs, said the Green Tribunal.

The court said no industry will be permitted to operate hereafter in the lake area, unless allowed by Joint Inspection Team(JIT). The joint inspection team has the power to seal the industries with the help of police and KSPCB.

The NGT also gave an ultimatum to clean the lake of all waste and pollutants, and carry out desilting, within one month, and said no more untreated sewage can enter the lake.

The committee can induct any special agency for execution of this task. The state government can ask the developers around the lake to bear the cost of transfer of sewage. The state government needs to present the plan of action to completely prevent and control pollution in Bellandur Lake, before the Tribunal within a period of two weeks.

The NGT has been wielding its power to stop sewage from entering Bengaluru’s lakes, and has issued many such orders in the past, pushing the government to come up with concrete action plans. However, this time the Green court has given an ultimatum to the government. The case has now been adjourned to May 18, 2017.

The circulars to be withdrawn from BBMP and Urban Development Department:

How current are disclosures by civic authorities under RTI Section 4(1)(b)? No one knows!

Civic authorities must voluntarily disclose certain information under Section 4(1)(b) of the RTI Act. How do BBMP, BDA and other agencies fare?

Will your neighbourhood grocery store recover from COVID lockdown?

Neighbourhood shops selling essentials have stayed open during lockdown, but even they have suffered severe losses. Disrupted supply chain, extremely low footfalls, lack of movement passes and home delivery staff meant they have a long road to recovery.

Is the axing of 5,000 trees for road widening around Bengaluru justified?

Bengaluru only has around 3% of its green cover left. Can the city cope if 5,000 trees in its periphery are chopped off for yet another road widening project?