Food inflation is at 7-month high. Wouldn’t it be nice to know areas where you could get fresh vegetables in Bengaluru for throw away price? There are some places hidden on the outskirts of the city where you can buy fresh locally grown vegetables directly from farmers.

Also known as Santhes, local small vegetable markets are organised once a week, in various places on the city outskirts.

Homemakers, suppliers to hotels and restaurants, street sellers, shop owners and even direct hotel and restaurant workers who want to grab some fresh vegetable for a good price, flock such Santhes.

“We come here to buy our weekly vegetables, because they are cheaper compared to the ones sold by the vendors in the markets and malls. Most importantly they are fresh,” says Radha M, a homemaker and resident of Bannerghatta Road. This explains the beeline in the Santhes on any given day in any area.

Some senior citizens are regular visitors of these Santhes, primarily because they find the sellers more trustworthy. Shanthala K, a resident of Tavarakere, says that her family has never bought vegetables and fruits from a mall ever. She prefers to buy from such local markets, as there are many options and the rates are negotiable. According to her, the vegetables and fruits sold here have less chemicals and pesticides. They are fresh and natural.

Akshar S, a resident of Jeevan Bheema Nagar, found a Santhe accidentally near Banaswadi when he was returning from his early morning drive. “The vegetables and fruits here are fresh and healthy. My family was very happy with the items when I purchased them for the first time. Then we started purchasing our weekly vegetables from here,” he says.

Why you should visit a Santhe?

There are some who purchase from Santhes in bulk to sell it elsewhere. Ravi Shankar is one such middleman. “I have taken a contract of some hotels and resorts, to supply fresh stock. I come here on Tuesdays to buy items in bulk, like 25-30 kilograms of fruits and vegetables.”

He also has contacts of some farmers who sell their produce only to him for a lesser price, which is a good business opportunity for him. On other days, he purchases the vegetables and fruits from other Santhes in Anekal, Chandapura or Jigani. 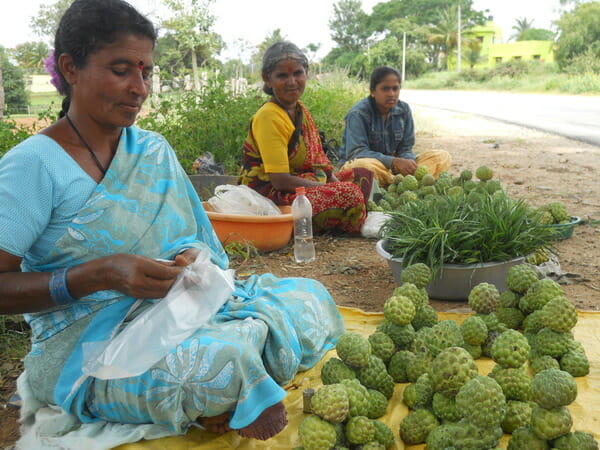 Small time growers with no greed

The sellers at the Santhes are mostly villagers, though there are also middlemen. They come here early in the morning, by 6.30 am once a week, on the Santhe day.

Sharadamma, a villager selling vegetables at Magadi Road Santhe is 80-years-old. She sells tomatoes. She says the tomatoes are grown in her backyard and free from pesticides and chemicals. She sells them for Rs 15 per kg, while the HOPCOMS rate of tomatoes is Rs 27 for a kg.

Her sister, who is also her neighbour, grows pumpkin. These are small in size when compared to the ones sold in the market. She sells a whole pumpkin weighing 1.5 kg at Rs 20, while HOPCOMS sells a kilogram for Rs 15.

The two sisters bring their produce in small quantities and set up their stall at 8am on the Santhe day. They leave once their stock is sold out.

Padma, a seller at Bannerghatta Road Santhe, leaves her home in Anekal at 6.30am and arrives at the Santhe with sacks of vegetables by 8am. “After 6.30pm, if there is any vegetable left, my husband takes it to KR Market to sell them, and returns the next day.” The same cycle repeats every week.

Basavaraj, a middleman and seller at the Bannerghatta Road Santhe, buys vegetables from the villagers in Chandapura, Anekal and surrounding places and sells them at the Santhe. He claims to be sharing profits with the growers directly and returning the unsold vegetables to them. Elderly farmers who cannot sit in Santhe to sell vegetables are his source.

Hygiene an issue to be addressed

While price and quality are the plus points of Santhes, cleanliness and hygiene are the issues to be addressed. Sometimes in some Santhes, rotten fruits and vegetables are thrown around and cattle are seen feeding on them. Stray dogs can also be seen walking around.

The situation is worst during monsoons, in the places where there is no proper pathway to walk. People, especially senior citizens are seen hopping and jumping to reach the vendors. Santhes in Anekal, Chandapura, near Bananswadi and Magadi Road – all have this problem.

Ramesh Prasad, a shopper at Bannerghatta Road Santhe says that the government should ensure there is cleanliness. Just because it is a weekly affair organised by villagers and on city outskirts does not mean cleanliness is not of priority.

BBMP isn’t very supportive of such unconventional markets. Chairperson of BBMP Standing Committee Y R Gouramma says that “Santhes are becoming a menace.” She complains that they occupy BBMP land free of cost, make brisk business and leave the place, without cleaning it up. She feels that fines for the littering and
a nominal fee should be collected from them, but doesn’t want to regularise them.

Santhes are very competitive in the pricing, when compared to malls, Horticulture Producers’ Cooperative Marketing and Processing Society Limited (HOPCOMS) and other stores. Sometimes some vegetables which are not locally grown are priced higher than the market price, but if you plan buying of your weekly vegetables, a trip to Santhe is a good option.

A table of comparison of prices taken on October 12, 2013 is here for the reference.

Traders say no to mall on their santhe maidana
Comeback of morning markets
Save KR Market from landgrabbers
Growing your own vegetables!
Caju at City Market