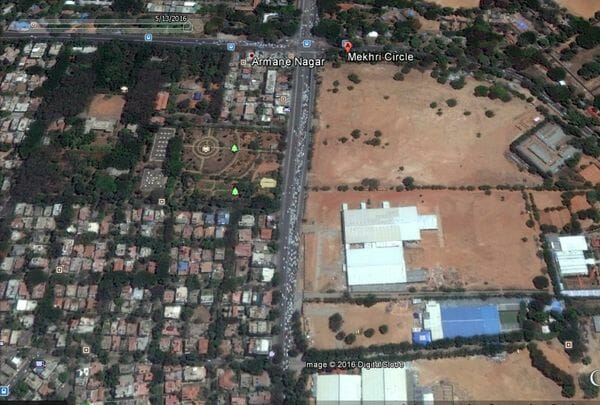 A Google Earth image shows piling up of traffic coming from North Bengaluru, in front of Palace Grounds.

The State government has budged to the public demand and has put the tender process related to the proposed controversial steel flyover on hold. According to news reports, tender process was in the final stages of being awarded. Following a meeting with many urban experts from the city, Bengaluru Development Minister K J George told media that the government will hold public consultations with civic groups before finalising the project.

The six-lane steel flyover, 6.7 kms long and costing Rs 1350 crores, is expected to be one of the longest flyovers in Asia. As per news reports, the project will need about 60,000 tonnes of steel. Only two companies had bid for the project, and the selected bidder L&T has bid 40% above the project cost. The tender was put on hold just before being finalised, due to public pressure.

Chief Minister Siddaramaiah, who had announced the project in the 2014-15 budget, said that the project would make transport to the international airport easier. One of the overenthusiastic projects aimed at turning Bengaluru into Singapore, this mega steel flyover from Basaveshwara Circle to Hebbal flyover, invited scorn from many.

A petition addressed to the Chief Minister is already up on Change.org, while some organisations are gearing up to file a PIL soon. Sentiments of those opposing the project is evident from the Change.org petition, which asks the CM to stop the ‘VIP steel flyover’ and instead to invest in public transport. Within two days, 679 people have signed the petition.

The project has been opposed by many citizens, urban planners, engineers and environmentalists on many grounds. But they all make some common arguments – that the project is a huge waste of public money, and that it will benefit only a very small percentage of the population rather than the public. Essentially, the project is seen as pumping of money into a ‘private road’ rather than as public investment. With more flyovers and poor public transport options, the public has less incentive to travel in buses; hence more cars are expected on roads.

A project junked by experts still makes it to tendering stage!

The way BDA has handled the situation has irked the public even further. When initial reports about the project started emerging in the last few months, many experts had severely criticised the project and questioned the lack of public consultations. They had said that the bridge would be unaesthetic and that BDA did not consider alternatives. The Chairperson and Secretary at the Institution of Engineers, and traffic expert Prof M N Sreehari are among those who had trashed the project.

It was only on June 27th that BDA issued a press release calling for suggestions from public on the project. The report on this appeared in many newspapers on the 28th, while the last day for sending suggestions was June 30th. Deccan Herald reported BDA Engineer Officer Shivashankar as saying that the suggestions would be placed before ministers at a meeting on 30th.

No information on public domain

But no information about the project – DPR, traffic study etc – were placed in the public domain, though the BDA claimed to have been studying the issue for an year. Citizens were expected to send suggestions without knowing the project details. Speaking to this reporter, Shivashankar said that DPR was not uploaded on the BDA website as the project has not yet been finalised. He said that tender details were available on the website though. “Public can send comments anyway, they will be incorporated in the project,” he said.

Sathya Sankaran, a founding member of the NGO CiFoS (Citizens For Sustainability) and of the civic group Praja RAAG, has sent suggestions to the BDA. He has asked BDA to share in public domain the DPR, feasibility report, Environmental Impact Assessment, tender invitation copy and traffic study details of the project. He has also asked BDA to disclose alternative options that were considered for airport connectivity, and also reasons and actions taken for every suggestion received from the public. He requested that after disclosing these details, BDA should give another 30 days for the public to send feedback.

Sankaran has not got any acknowledgement for his email to BDA. He says that he is going to send a physical copy of the letter, and will gather a few concerned people to make a representation to the BDA. He says that CiFoS and Praja RAAG, along with the Indian Institute of Architects, are strongly considering filing a PIL against the project soon. “If BDA does not give us information, we will take the legal route. Others can also join us. We may meet lawyers next week itself,” he says.

‘BDA violating its own Master Plan’

Vinay Sreenivasa of the Alternative Law Forum (ALF) says that the BDA is violating its own Master Plan through this project; the project was not part of the Master Plan. He says that BDA is not legally mandated to issue a public notification regarding its projects. But as per the KTCP Act (Karnataka Town and Country Planning Act), if a change is made in land use, a scheme should be developed and it should be submitted for public consultation. Hence this project should be put forth for public consultation just like the Master Plan, he says.

Sreenivasa asks why the government has been focusing excessively on airport transport when it claims to have no funds for other infrastructure projects. Sreenivasa is a member of Bengaluru Bus Prayanikara Vedike, which had requested the CM to allocate Rs 1300 cr in the 2015-16 budget for BMTC, to improve the infrastructure and number of buses. The Vedike had said that this amount could be used to add more non-AC BMTC buses, build shelters at all bus stops, reduce bus fares, to pay arrears of BMTC staff etc. But no such allocation has been made for BMTC. Sreenivasa questions as to how the government allocated money to this project.

Urban expert Ashwin Mahesh in his Facebook post lists what else Rs 1400 crore can buy, instead of the steel bridge – either 4000 more buses, or 300 km network of high-quality footpath, or groundwater revival which would raise water supply in Bangalore by 50% etc. “I’m sure there are many more examples we can put forward. Somehow, 6 km of roads that will anyway be clogged, using a technology that has only been tried by minor Communist states like Vietnam (it was a disaster there too), and designed by BDA of all institutions … it’s beyond words,” says Mahesh in his post.

As per The Hindu, three existing flyovers, one underpass and two skywalks will have to be demolished for the steel flyover project – yet another instance of poor planning. Sreenivasa questions why the newly constituted Metropolitan Planning Committee (MPC), which is supposed to be the overarching planning body for Bengaluru, is not involved with planning the project. Despite the existence of MPC, the project was approved by the BDA’s Technical Advisory Committee.

Sankaran says that, to be able to access JNNURM funds, cities are supposed to have a Unified Metropolitan Transport Authority (UMTA). UMTA has to be the technical body that works with MPC to implement integrated transport planning. “In Bangalore, the BMLTA (Bangalore Metropolitan Land Transport Authority) was formed for this, but it is defunct now.” He says that, with integrated planning, there can be elegant transport solutions rather than fragmented projects by different authorities. A startling example of poor planning is that the very alignment where the steel bridge is going to be built, is the same marked for another flyover between Hebbal Junction and Silk Board Junction.

Project on hold, but not dead!

The steel flyover plan has not been a favourite among members of Bangalore Blue Print Action Group (BBPAG) too. Times of India quotes BBPAG member RK Misra as saying: “We suggested an alternative to the flyover: an elevated road from KR Puram through SG Balekundri Circle, Cantonment, Jayamahal and Mehkri Circle. There should be access points from Cubbon Park, Ambedkar Veedhi and Infantry Road so that vehicles can directly get on to the elevated road and head straight to Hebbal. This will prevent vehicles from choking Raj Bhavan Road and Chalukya Circle.”

Ashwin Mahesh reacts to this: “The points on which people opposed the flyover were that (a) money should be spent to promote sustainable options and not on infrastructure. (b) there should be wide consultation on an idea before it is decided and acted upon, and (c) it should be part of an overall plan for the city. The government has re-interpreted this as “It should not be on Bellary Road.”

“As a result it is now proposed to build the flyover from Indian Express junction near Cunningham Road to Mekhri Circle via Jayamahal. While defending the original plan BDA claimed to have done research for one year, but that hasn’t stopped it from proposing an alternative on-the-spot on the original became unviable. We don’t need this flyover either. Buy 4000 buses instead.”

‘There are cheaper solutions’

Regarding improving access to airport road, Sankaran says that there are much more easier and cheaper solutions. Other approach roads to the airport from different directions in the city, such as Nagawara, Thanisandra, Goraguntepalya etc can be developed. Real-time information can be given to public about congested roads so that they can take another route; bus lanes can be created. Or the commuter railway can be extended by about 7 kms to reach the airport, and it would cost only Rs 800-1000 crore to build this network, says Sankaran.

It’s not that the government has not considered these alternatives. Over the last few years,  the government has been considering developing other approach roads and extending Metro to airport. In fact the government even sanctioned Rs 31.5 crore to develop three roads to the airport. But contracts keep going to questionable mega projects. Speaking of ambitious projects, the first steel bridge proposed in the city is yet to take off. This JC Road project, announced over a decade back, gets partly resurrected every now and then though.

If you dream of bringing in a change by involving in grass root decision-making of Bengaluru, then this one is for you. B.CLIP aims to train interested people with calibre, on handling city governance better.

Despite KSPCB’s warning to the local gram panchayat, no action has been taken to close the illegal garbage burning sites in Kadugodi near Whitefield.

This by-election, ask questions to the ex-MLAs who are back for your vote

Four assembly constituencies in Bengaluru are going into the bypolls this week. And in three of them, disqualified MLAs are contesting again, albeit from a different party