The study ranks cities around the world based on 42 variables including socio-economic factors like GDP, population, corporate headquarters, commercial real estate momentum and innovation capacity and technological prowess, access to education and environmental quality.

In the concluding remarks of the research article, Jeremy Kelly, Research Director at JLL writes, “looking ahead, we’ll be watching for the effects that protectionism, nationalism and environmental degradation have on many of these cities and how they adapt to these challenges. We’ll also be taking note of investment in infrastructure, a critical factor impacting quality of life, business and real estate. After all, history is fraught with once great cities that were complacent and took their eyes off the forces of change. When those forces seem to come by the nanosecond, no city can afford to blink.”

Cut to Bengaluru. Just two days after the above research report was released, on January 18th, 2017, a section of citizens from the dynamic city who had gathered at St Joseph’s Indian High School auditorium were up in arms against the authorities over the erratic development of Bengaluru. They were all pressing the authorities for one specific thing, among many others—to contain the growth of the city for sustainability. 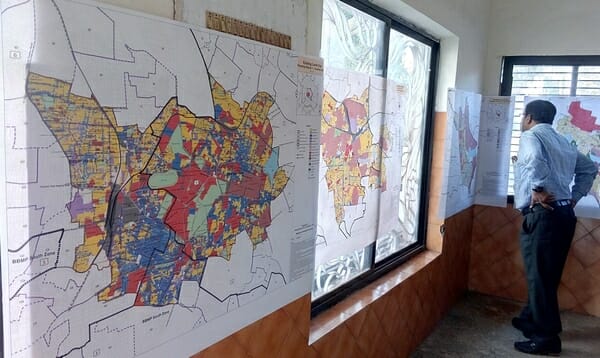 Draft planning map of the city was on display at the public consultation of BDA’s Revised Master Plan for Bengaluru. Pic: Akshatha M

“Do not overburden this city. It cannot take additional population. Do not further develop Central Business District,” said a city-based architect and member of Citizens for Bengaluru Naresh Narasimhan.

The occasion: public consultation organised by Bengaluru Development Authority (BDA) to discuss the Revised Master Plan-2031 for Bengaluru Metropolitan Area. The BDA being the planning authority for the local planning area, has undertaken the revision and preparation of master plan for the next 14 years, as the previous master plan has expired. The growing population, need for better housing and transport call for a master plan for the city, and BDA is into preparing it.

On Wednesday, one such public consultation was held for Bengaluru East Zone—a prominent zone in the city that includes parts of Central Business District comprising MG Road and Brigade Road.

There was no dearth of suggestions in the public consultation, but the BDA also had to deal with the wrath of the public. Some objected the concept of preparing master plan only once in 15 years, while some were worried over the plans that remain only on paper.

A lot of them expressed their concern over the growth of the city that manages to overrule the planning process and goes erratic. Naresh Narasimhan urged the planning authorities to shift their focus from developing Bengaluru itself to developing nearest towns such as Nelamangala, Bidadi and Ramanagara. “Bengaluru cannot hold the pressure anymore. Now it is time that nearest towns are developed and expanded,” he pointed.

Muralidhar Rao from Praja-RAAG and Vijayan Menon from Citizen Action Forum (CAF) too insisted that Bengaluru’s growth needs to be contained and no further expansion made. “Let the government develop satellite towns around Bengaluru to shift the future development,” Rao said.

For Aruna Newton from HAL and Indira Nagar Residents’ Association, the biggest flaw in the vision document of the BDA based on which the RMP will be drafted, is not considering “quality of life” as a criteria. “The city lacks water supply, garbage is not handled well. The authorities are unable to handle the needs of this city. With all this, where is the quality of life? Quality of life is fundamental for a city,” she stated.

Since the BDA has projected Bengaluru’s population to be 2.45 crore by 2031, N S Mukunda from Citizen Action Forum suggested that importance be given to Commuter Railway System. “If you are planning for that kind of population, then CRS must be larger. It must be designed to carry higher ridership,” he said.

Yet another aspect raised by the public was for the BDA to compare the proposed land use map of RMP-2015 with that of latest map. Retired chief secretary Dr A Ravindra who is now the Chairman of Smart Cities Foundation said that by doing so, it would give a clear idea of how the proposed planning for the city has remained just on paper. “Compare how the land  reserved as green zone has become a commercial area. And just because green zone regulation has been violated in an area and it has become partially commercial, doesn’t mean, the BDA has to let the area to be fully commercial in the RMP,” he suggested.

Kathyayini Chamaraj from CIVIC pointed at having no mention of social infrastructure in the RMP vision document. “When you say affordable housing for all, why not project the land available for the purpose? Where is the land for such infrastructure? The city needs to have land bank for such purposes,” she said.

Some of those who attended the meeting questioned the power of BDA to organise meetings and decide on RMP when the Bangalore Metropolitan Planning Committee (BMPC) exists. “The 74th amendment says every part of the Master Planning process should be done in consultation with the public, not just the end product. If you had shown the vision document to people before drafting it, we wouldn’t have agreed to this idea of master plan at all,” Naresh Narasimhan said.

Read the concept note prepared by the BDA for preparation of Revised Master Plan 2031 for Bengaluru here.

The stage is set for a new Bengaluru with three municipalities. How did the process take place? What did the committee that was supposed to restructure Bengaluru say in its report?