With this, the options that can help commuters avoid the city centre will increase, while real estate rates around the Peripheral Ring Road are expected to rise higher. This is meant to destress the Outer Ring Road, even as Bengaluru has been expanding without limits. 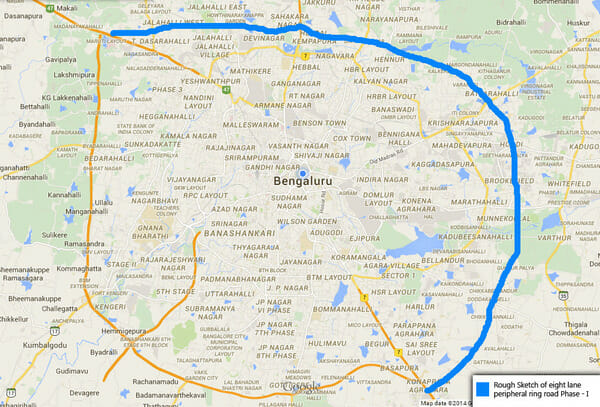 Read this article published in 2011, to see the areas that the first phase of Peripheral Ring Road passes through. The recommendation for clearance can be seen on page 13 of 84th SEIAA meeting proceedings, dated November 18th 2014.

Except some areas in the suburbs, the alignment of PRR runs through the green belt; 60% of it runs through cropland, 17% via agriculture plantation and 16% runs in commercial plantation area.

The idea of a Peripheral Ring Road for Bangalore has been projected even in the Comprehensive Development Plan – 1995 (CDP-1995). The length of the PRR was projected to be 116 kms, out of which the first phase was about 65 kms.

The PRR will have eight lanes on the main carriageway and three lanes on the toll-free service road on both sides.

Land acquisition will be done for a total of 1,920 acres for Phase I, for a width of 100 metres. Of this, 75 metres has been reserved for the main carriageway (eight lanes, where each lane is 3.5 metres wide), and the six toll-free lanes. The median will be 12 metres in with. If there arises a need to widen the road in the future, they will not widen it from the outer ends, but will take up space from the median area, is what BDA officials claim.

Another 25 metres running alongside the road has been kept aside for commercial development, as a joint venture between landowners and the BDA. This space will be used for amenities like water, electricity, and could include formation of sites anc commercial spaces.

The entire lenghth of the first phase is 65 km. There are efforts to integrate this with the NICE Road, whose alignment matches with the second phase of Peripheral Ring Road. 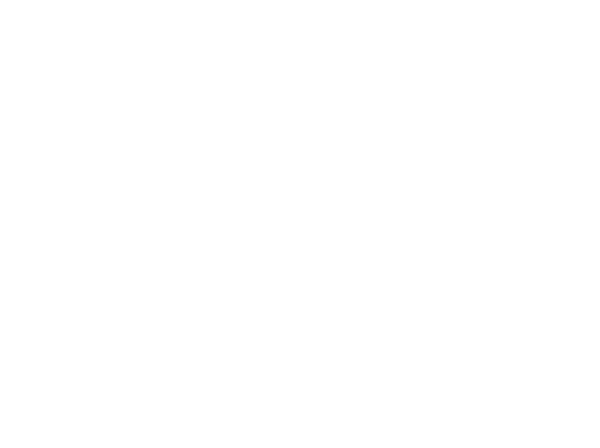 What does the environment clearance say?

According to the environmental clearance letter dated November 20th 2014, the first phase has provision for 69 box culverts, four minor bridges for passing Raja Kaluve and nalas. There will be 36 structures for passing national and state highways, and other roads.

The Environment Impact Assessment was done by the Hyderabad-based consultants, Ramky Enviro Engineers Ltd. The clearance letter states that there was a public hearing conducted at Bilishivale village in Bidarahalli Hobli (Bangalore East) by the Karnataka State Pollution Control Board.

The main conditions in the clearance letter are:

Check the copy of the environment clearance at the end of this article.

When will the project actually start and finish?

Currently, according to BDA sources, the project is waiting for the Japan International Cooperation Agency​ (JICA) loan to come through. ​As soon as it comes, the project will start, say sources. If everything goes as BDA planned without any disputes, the construction will start by June-July 2015. However it does not seem so easy. There are many more miles to go before the actual road work starts.

Credit Risk and Infrastructure Solutions Ltd prepared a pre-feasibility report for PRR only in 2012. Now environmental clearance is in place. There will be a Social Impact Survey done, to estimate the impact of the project.

​The Social Impact Survey for land acquisition has started on November 25th 2014 by Centre for Management and Social Research, Hyderabad. The survey will evaluate how many families will be impacted from the land acquisition may need rehabilitation, the impact of the road on environment and surroundings, and so on. This will complete in six months.

After that land will be acquired, and then the construction will start. If we recall the case of NICE road, the project was stalled for years because of disputes between landowners and the project company. There is every chance of same thing happening here, hence there can not be a timeline for PRR practically as of now.

W​hat is the overall budget for the first phase?

The Detailed Project Report for the first phase projects a cost of Rs 9,600 crores (as on November 2014). Of this Rs ​3,800 crores has been kept aside for construction and other miscellaneous expenses. Rs 5,800 crores has been allotted for land acquisition, but BDA predicts a possibility of this escalating, based on the new Land Acquisition Act.

At one point, the entire cost for the construction of PRR was projected to be Rs 550 crores, keeping in mind that the land cost of 8 lakh per acre. However, considering the cost of real estate has gone up multiple times, the land acquisition itself will cost way too much.

The PRR costs a huge Rs 58.46 crores per km. BDA officials justify this, as there will be additional infrastructure, such as bridges, dividers, underpasses etc. “Exact nature of the split will be presented in the DPR,” said a BDA official who did not want to be named.

How is the project funded?

​JICA is giving a loan of Rs 3,800 crores for construction expenses. Land acquisition expenses are not covered in the loan. One of the reasons that the BDA is relying on the JICA loan is because the rate of interest, pegged at 1.8% is considerably low.

BDA officials also stated that they have a plan of action to mobilise funds for the acquisition cost.

What is the land acquisition pattern?

BDA claims to be opting for a farmer-friendly land acquisition. Compensation for the land acquired will be done in the following three ways. Those selling land can choose any combination of the three ways, according to BDA.

Who will benefit from first phase of PRR?

The first phase will cover 65 km. ​This will integrate many national and state highways around Bangalore -Tumkur Road, Bellary Road, Old Madras Road and Hosur Road.

There is yet another effect on the city. There are many builders already acquiring land and promoting housing projects along the road. More housing projects on outskirts will hopefully help decongest the city to a certain extent.

Copy of environment clearance for the first phase of Peripheral Ring Road:

PRR orphaned, even as builders use it for sales
Peripheral Ring Road: Out of 4500 Cr, is 3850 Cr for grabbing land?
No water for peripheral areas of Bangalore: Gaurav Gupta

Burnt to a cinder