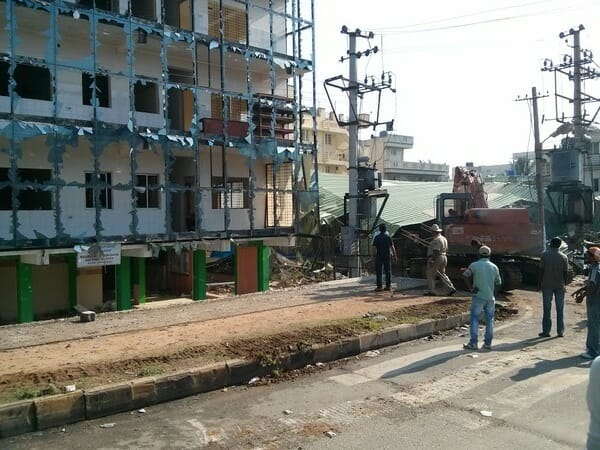 Buildings being razed down at the demolition drive at Sarakki Lake. Pic: Rahul Ravi

Demolition drives on lake beds is the burning issue in Bengaluru now. The drive that commenced with the demolition of structures in and around Sarakki lake bed in mid-April has continued with Bengaluru urban district administration carrying out yet another eviction drive at Banasawadi last week.

While the district administration has been hailed for its bold move to clear the encroachments, it has also been criticised for penalising people who have been living peacefully in the city for decades. Eviction drives and rumours surrounding it have indeed made people who have been living in lake beds, anxious. In a conversation with Citizen Matters, the man behind the drive, Bengaluru Urban Deputy Commissioner V Shankar, tries to clear the air surrounding demolition drive.

What prompted the district administration to spring into action in clearing the lake encroachment?

Will the district administration demolish only the private layouts or also the layouts developed by the BDA? BDA commissioner has himself stated that 13 BDA layouts are developed on lake beds.

Do you target only the commercial establishments or residential buildings as well?

Will the eviction drive continue? How far will you go back in time, considering that some of the structures in Central Business District like Kanteerava Stadium were constructed on tank beds?

Demolition drive has been stopped for the time being. Though there are plenty of encroachments to be cleared including private and government layouts, we have stopped the drive for now. Our next move will be based on the cabinet decision. If the government directs us to go ahead, we will.

What measures the district administration will take to prevent lake encroachment in future?

I believe, our present move to demolish structures on encroached property will be a warning bell to those who intend to buy/construct buildings without proper documents. We will initiate stringent action against those who commit the crime of encroaching government land.

Can you brief about the actions initiated against perpetrators?

What are the cases booked against them?

Illegal structure owners and officers have been booked under 192A and 192B of the Karnataka Land Revenue Act. 192A section is meant for the offense and punishment for unlawfully entering and occupying government land, cheating and creating documents for the purpose of selling/transferring, creating forged documents, failure to initiate action against encroachers etc. These offences are punishable with imprisonment from one year up to three years.

Any suggestions to the people who would like to buy property/ build house/ establishments in Bengaluru?

People should ascertain the legality of property documents before proceeding to buy or build a house on it.

In a meeting last week, the Upa Lokayukta questioned as to why the BBMP allowed the construction to continue when the project did not have the necessary approval.