Suresh, an employee of a private firm, waited patiently at the Bangalore Development Authority (BDA) premises, for his name to announced in the flat allotment list. He had applied for a one bedroom flat in Kaniminike, as he trusted the BDA, and was wary of going through any middlemen to purchase a house. He was one among the hundreds who waited with bated breath to see if they would be lucky, in flat allotment that took place on November 27th 2014.

In its 4th notification dated February 28th 2014, the BDA called for applications for 4,228 flats (1BHK EWS category – 1,418, 1BHK General category – 1,418, 2BHK – 1,008 and 3BHK – 384) in the following areas: Alur, Doddabanahalli, Gunjur, Kaniminike, Malagala, Thippasandra and Valagerahalli. On November 27th, 947 one-bedroom flats were allotted through a draw of lots at the BDA premises in Kumara Park West for those who had applied in the 4th notification. 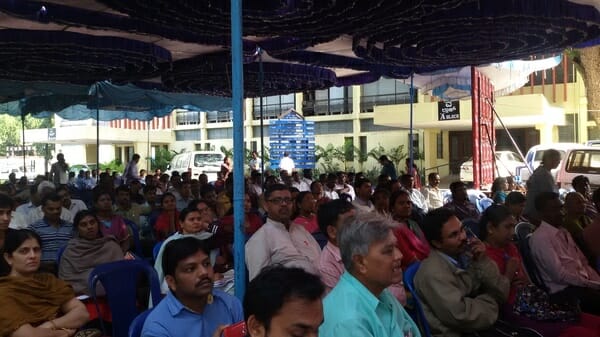 Applicants wait in the hope that they are assigned a flat. Pic: Ganga Madappa

While the notification was for 1,418 flats each in the General and EWS categories, BDA had received applications from 355 and 1,265 citizens for each of the categories respectively. Of this, 66 applicants in the general category, and 315 in the EWS category were considered ineligible.

Like in the case of previous allotments, flats were being assigned to eligible applicants by a draw of lots. The BDA had already drawn a list of applicants and it was the flat numbers that were being assigned by lottery. On enquiring about the criteria by which this list was drawn up, BDA Public Relations Officer, Dr K Puttaswamy stated that people were chosen as per the criteria listed in the BDA (Allotment of sites) Rules 1984—on the basis of seniority with respect to number of application attempts, then by age, and in case there were candidates where the application attempts and the age were the same, based on date of application.

However, there were several people questioning the process, stating that it was not transparent enough. 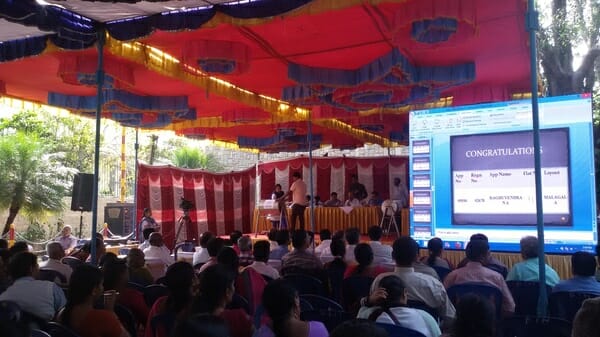 Flat numbers being alloted to applicants in real time, as lots were picked. The rolling drum can be seen onstage. Pic: Ganga Madappa

Chips that had the flat numbers were picked up from a rolling drum and assigned to applicants. Every time a lot was picked, a powerpoint presentation was being updated in real time. BDA said they would put up the list of allottees with their relevant flat numbers, once all the allotments were done.

Vijayakumar, an auto driver, suspected foul play in the process by which the names of applicants who were allotted flats were drawn up. He said, “If BDA is stating that they are drawing lots, how have they come up with the list of names in advance?” He then proceeded to call a local television channel to record the goings on.

Citizens Matters tried reaching the BDA Chairman, S K Patnaik and the Commissioner, Sham Bhatt for clarification on the process by which the list of applicants were drawn prior to the lottery, but we are yet to hear from them.

There were also cases where applicants had applied under a particular category, but had been assigned flats under another. When this was brought to the attention of the PRO, he stated that these were in all likelihood typos and could be rectified.

‘BDA not transparent enough, not tech-savvy’

Several people who found themselves on the ineligible list claimed to have applied as per the BDA norms, and questioned the reason for their ineligibility. K Puttaswamy, Public Relations Officer said that incomplete applications and those not having the necessary documents were not considered for the allotment. While there was no way to clarify reasons for ineligibility on the day of the allotment, a source from BDA stated that if people would like to find out the reasons for which their application was not considered, they could meet the Deputy Secretary 1 or the Public Relations Officer between 3 pm to 5.30 pm on weekdays. 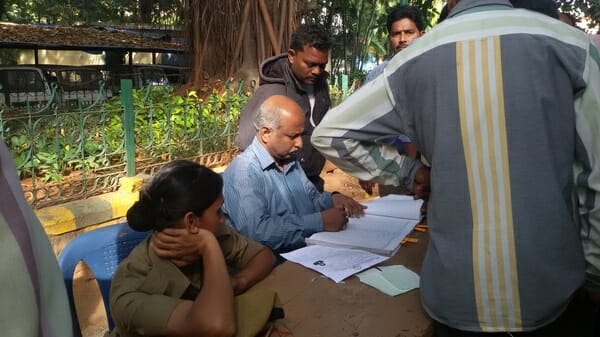 He also pointed out the tedious manner in which people had to check if they were eligible. BDA officials were seated across two help desks with sheets of paper that contained the names of the people, sorted according to the areas where the flats were being built. Sashidhar said, “The officials and the applicants had to go through the sheets manually to find their names on the list. It was really time-consuming. How difficult would it have been for the BDA to have done the same on an excel sheet and do a search for the name instead? It would have not only been faster, but also convenient for both BDA and the applicants.”

Ramesh, a network support engineer, was yet another person who was considered ineligible. He said, “Many of us have taken the day off from work. Though we might wait here the entire day, there is no chance of knowing whether we will be assigned a flat or not.” Sashidhar added, “Considering that the BDA has the contact information of all applicants, and has collected a sizeable amount as deposit, it could have sent us a letter by post or an email to inform us about the status of our application and whether we would be considered for the allotment. It is quite disheartening that we have travelled so far, only to be sent back without a flat or any information.”

Work in Gunjur stopped, contractor to be fined

D Shankar, who is the proprietor of a dry cleaning business, currently resides in HSR Layout. He was assigned a flat in Alur. While he was certainly happy, he said, “I had asked for one in Gunjur or Thippasandra with the intention of living there with my family, but have been assigned one in Alur. This flat is more than 50 km from my workplace. That does not work for me at all.” He then added, “If I am not able to exchange the flat with someone in my preferred location, I will have no choice but to relinquish the allotment.”

Regarding the status of construction, Gowdaiah N G, BDA Engineer Officer, said, “Some flats are completed and ready to occupy. Some others are likely to take a couple more months. There is a delay in construction in Gunjur, because of a problem with the contractor – he is likely to be penalised.” He also added that the BDA might have to consider assigning the work in Gunjur to another contractor if the work does not resume.

Allotment for 2BHK and 3BHK flats in a few months

There were several people who were also unclear about the payment process and loans available. Gowdaiah said that BDA had signed an agreement with several banks including Indian Overseas Bank, Canara Bank and State Bank of Mysore, and those who looking to avail loans, especially in the EWS category, could get in touch with these banks and would be given loans without too much hassle.

BDA site? Yes. BDA flat? No, no!
How to apply for a BDA flat in Bengaluru?
BDA allots flats; Quality fine, but not location

Bangalureans need to have the survey number, village, hobli and taluk as found in the registration document to be able to use this portal

Work on Meistripalya Kere starts, to finish by early 2014

After years of litigation and delay, BDA is starting the re-development of Meistripalya Lake in the heart of Koramangala.