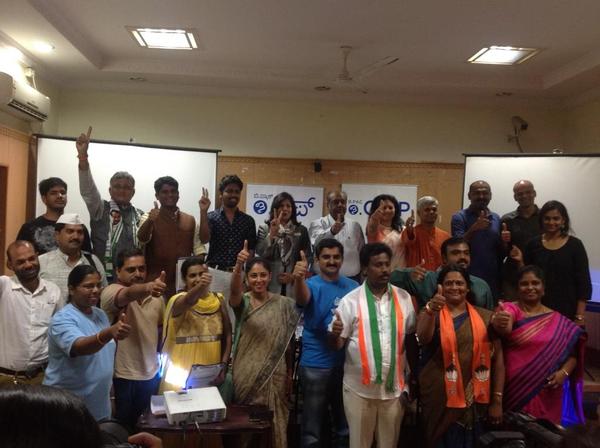 20 candidates trained under BPAC’s Civic Leadership Incubator Program are contesting the upcoming BBMP elections in Bengaluru. They went through the nine month program where they were equipped with theoretical knowledge, post which they took up many community projects. While ten of the participants have aligned themselves to various political parties (BJP – 3, INC – 1, JDS – 1, Loksatta – 5), the remaining ten are contesting as independent candidates.

Over the past months, these candidates have been actively engaged in their communities, undertaking projects across a wide spectrum of civic activities. Several of them have been addressing the problems of garbage management and waste segregation in their wards, while others have championed the cause of women empowerment through sexual harassment prevention training, women employment assistance etc. They have also been addressing issues such as Lake conservation, voter registration, public safety etc in their respective wards.

A BPAC press note says that these candidates have been equipped with the ability to reach out to relevant experts (through the B.CLIP program) to seek help to design of sustainable and impactful solutions to their problems.

The press note quotes T V Mohandas Pai, Vice President, B.PAC, as saying: “Two years ago, B.CLIP was an idea. The fact that 20 participants from this program have felt motivated to contest these elections is a major step. Once this cadre of people in the city grows, it will definitely bring about positive change in the way the city is governed.”

Bangalore Political Action Committee (B.PAC) has announced the names of 50 candidates that met B.PAC’s endorsement criteria for 81 wards in Bangalore city for the upcoming BBMP elections, 2015.

Municipal elections have the largest impact on our everyday lives as basic and essential services like water, roads, sewage all come under the purview of a Corporator. We have more than 1000 candidates who are contesting the BBMP 2015 elections and the residents of Bangalore have a difficult task ahead of them to vote in a responsible and efficient government. Keeping this in mind, B.PAC has undertaken the exercise of endorsing the candidates to enable citizens to make a decision in the best interest of their respective wards.

The press note lists the key evaluation criteria as follows:

“We request Bengalureans to come in large numbers and exercise their franchise without fear, favour or inducements and to elect the best public spirited candidate from their ward only then they can demand better civic services from the elected corporators ” said Revathy Ashok, CEO B.PAC

“A country like ours has a diverse polity and you need multiple skillsets to tackle the issues that confront us today. It was a tough call and after diligent deliberations the committee concluded that each of these candidates had something valuable to offer the voters, and hence, should be supported in their endeavors to represent Bangalore “said, Kiran Mazumdar Shaw, President B.PAC.

Because of the government’s equity stake and a range of tax, cess and other exemptions granted to BIAL, the Karnataka Information Commission has taken the view that BIAL must respond to RTI applications.

Saturday’s statewide bandh called by the ruling BJP disrupted normal life in Bengaluru. Commuters, tourists and many others were stranded.

This time there are 42 nominations for the six categories. Time to recognise spirited Bengalureans for their contributions.