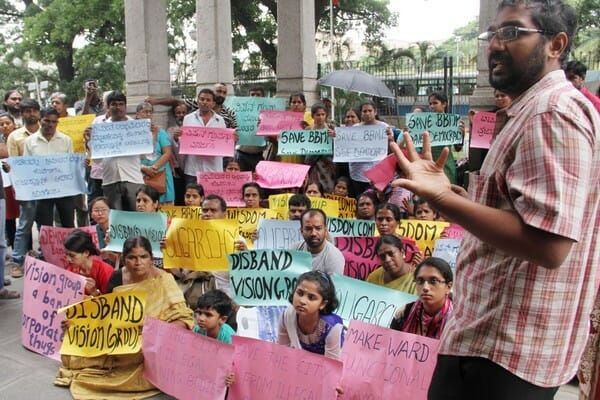 The newly formed Bengaluru Blue Print Action Group (BBPAG) has ruffled several feathers within the civil society. People from various quarters have denounced the new Action Group as “exclusively elitist,” full of elected representatives, bureaucrats and corporate honchos, with none to represent common citizens. The citizens who have seen several such independent or government-led groups or task forces in the past, are wary of the functioning of BBPAG.

Task forces and committees are not at all new to Bengaluru. There have been several of them, including Bangalore Agenda Task Force, ABIDe, Kasturirangan Committee, BBMP Restructuring Committee. Each of them worked as mandated by the government that was ruling. Some of them were limited to writing vision reports and/or pushing the government to do the things in the report. Some others were engaged in getting feedback and conducting status checks, and implementing new schemes based on the feedback provided by public.

Compared to previous task forces and vision groups, the newly formed Action Group at least on paper, seems to emphasise on the execution of plans mooted in Bengaluru Blueprint. The State government’s order states the 25-members Action Group has been formed to ensure that programmes and projects laid down for the development of the city are executed on time. The Action Group would act as an advisory and supervisory body and coordinate between various departments to implement quality work.

According to government order, BBPAG is supposed to finalise and implement the “Bengaluru Blueprint” drafted by Janaagraha Centre for Citizenship and Democracy during a workshop of multi-stakeholders in October 2015. The blueprint was drafted after interviewing 72 stakeholders from various categories, including, political leaders, bureaucrats, academicians, domain experts, citizen groups, eminent citizens, corporates and senior editors, claims the Blueprint report.

However, the citizen groups have vociferously criticised the relevance of the formation of the group. The main accusation against the Action Group is its formation as an ad-hoc committee by sidelining the Bangalore Metropolitan Planning Committee (MPC).

MPC is a constitutional body, which every metropolitan city is supposed to have, that will draft development plan for the metropolitan area as per the 74th Constitutional Amendment. Article 243ZE of the Constitution explains the powers and functions of the MPC. It says that not less than two third members of the Committee should be elected from elected members of Municipalities and Panchayats. It gives provision to consult institutions and organisations while planning, but with the permission of the Governor.

In Bengaluru, the formation of MPC was a laborious process. It was only after the High Court intervention that the MPC was formed in 2014. The Committee at present has 30 members all of whom are either elected representatives or bureaucrats. Despite the formation of MPC, with no meetings held so far, it remains defunct.

Among all other factors, the civic society members are particularly upset about the BBPAG because they think it has been formed bypassing the MPC. “I have no issues with the members of the Action Group, but my concern is about the ad-hoc body. These ad-hoc groups don’t take us anywhere,” observes theatre person and activist Prakash Belawadi. He stresses on the need to create a powerful MPC.

Executive Trustee of CIVIC, Kathyayini Chamaraj says that the formation of BBPAG reflects the government’s lack of interest in 3-tier system of governance which emphasises on urban local bodies. “The Group has been formed by-passing the constitutional structure,” she says.

She says she is disappointed with the government for not strengthening or expanding the MPC and limiting it as a body of elected representatives. “We had given several suggestions to the government on how the MPC should be and how many members it should have, but nothing has been materialised.”

Urban expert Ashwin Mahesh too has been vocal against the formation of Action Group. In a Citizen Matters Blog post, he wrote “it is not right to have the functions of the MPC being carried out by other entities outside the constitutional framework.”

Addressing the Action Group nominees, he observed, “in the past, many of you have been strong supporters of the MPC. In your own recommendations to governments and reforms commissions, the MPC finds mention. Many of you have served in positions explicitly designed to bring about constitutional and administrative reforms. Against that background, it would be improper to be part of the Action Group.”

Rajyasabha MP Rajeev Chandrashekhar who had spearheaded ABIDe during the last government, too has opposed the Action Group. In a write up published in Bangalore Mirror, he wrote, “if forming of this Vision Group is an indication that our CM has woken up to Bengaluru’s decline, mal-governance and corruption – then I welcome it. But even then, it’s a flawed decision and is violative of law. Despite my requests that MPC be independent and have outside experts also – has filled it with corporators from BBMP and some officers. MPC should have outside citizen participation, and that has been given the go-by,” he says.

He goes onto add, “as it is now, this Vision Group undermines the constitutional sanction of the MPC which is authorised to create the Master Plan for the city and lead the implementation of projects.”

‘No voice for citizens’

Yet another reason why the civic representatives are unhappy with the Action Group is over the selection of group members. Many members of this group have been the part of every other task force and vision group. Corporate honchos like Kiran Mazumdar Shaw or Mohandas Pai, or representatives from NGOs like Ramesh Ramanathan and R K Misra have been there and done it all many times earlier.

“The government should understand that the corporates are one of the stakeholders, but not the only stakeholders. Where are the members representing Resident Welfare Associations, social justice, urban poor, women and children?” asks Kathyayini Chamaraj.

She believes that the current members in the Action Group may give wonderful plans for the city, but they will also ensure that the government meets their elite infrastructure demands.

Similarly, Prakash Belawadi sees the absence of an environment expert in the Action Group. “At a time when Bengaluru is reeling under several environmental issues, it is surprising that the BBPGA has not included a person who can represent ecological interest,” he says.

Soon after the formation of the Action Group, a Change.org petition has been floated demanding the Chief Minister to give space for citizen’s voice in the Group. The petition calls BBPAG as a “cruel joke on citizens.” It says there is a significant omission of the voice of common citizens. “The BBPAG is exclusively elitist and their vision for the city is also likely to be limited, which can never be a democratic blueprint for the city,” the petition started by Vijay Grover from Bangalore Media Foundation reads.

Parallely, around 120 people representing citizen groups including progressive workers networks, trade unions, environmental groups, civic associations, academics, artists and others staged a protest at BBMP headquarters on May 13th 2016, Friday. Their protest was against the “undemocratic, unconstitutional decision of Chief Minister Siddaramaiah to set up the BBPAG.” The protest organisers called it a ‘club of rich and famous, to envision how Bengaluru needs to be managed and developed.’ They asked the Chief Minister to make MPC and ward committees functional as directed by the High Court of Karnataka over two years ago.

A joint press note from Citizen Action Forum, Environment Support Group, Alternative Law Forum and Forum for Urban Commons and Governance explains the rationale behind the protest. The note states that the BBMP Mayor, though appreciated the concerns of the citizens, declined to step out of the extra-Constitutional BBPAG stating he cannot go against the Government, as the Government gives funds to BBMP. “If I go against the Government, then BBMP may stop receiving funds,”; he is said to have stated.

Bengaluru lost its water bodies, and here’s what is remaining

What difference has losing lakes made to Bengaluru? There are many lakes that have been irreparably converted to public places. Images from a study on flood in Bengaluru show you how visible the difference is.

Bangalore’s only JDS MLA in for the fight

Who are the candidates in Chamarajpet? How has sitting MLA Zaheer Ahmed Khan performed in last five years? What are the problems in the constituency?