Two years ago when the Centre for Smart Cities, the same think-tank that came up with the idea of elevated corridors, formulated a proposal to concretise 29 Bengaluru roads, it was with the vision to build sustainable road infrastructure. Like many ambitious government plans, the execution of the project by Bruhat Bengaluru Mahanagara Palike (BBMP) continues to be stalled by obstacles not taken into consideration during planning.

The work has been held up in the absence of clearances from traffic police and due to the onset of monsoon as reported by the media extensively. However,  tender documents related to the project clearly show that the deadline had been specified after definite consideration of seasonal weather variations of the monsoon.

The BBMP is yet to complete the project even as bills up to Rs 95 crore have been processed. What’s more, BBMP recently went ahead and announced a new list of white-topping on 42 roads, despite being unable to manage hurdles for the white-topping work already in progress.

The white-topping project is divided into Package 1 and Package 2 awarded to two different tenders for execution.

The first package taken up by M/s NCC Private Limited covers three metro reaches, two stretches of Outer Ring Road, and six other junctions. The intended date of completion was August 22, 2018 as mentioned in this work order.

Similarly,the time-line for execution mentioned was set between August 28, 2017 to July 27, 2018 for Package 2, covering 13 arterial roads and 11 high density roads. This was also found by Citizen Matters in the acceptance letter given to the tender company M/s Madhucon Private Limited.

The project details mentioned here are sourced from BBMP’s website and individual information provided by the department. So far, Rs 39. 92 crore and Rs 55.65 crore, for packages 1 and 2 respectively, have been billed for the white-topping project. It is still identified as ‘work in progress’ on stretches where work has commenced.

BBMP Chief Engineer (Projects-Central) K T Nagaraj says meeting intended targets is not always possible in urban Bengaluru. “In urban areas, white topping is difficult to finish with the imprints of vehicles and footsteps of people and animals. It could be easier in the outskirts, where the hurdles are less,”  he said. For that matter, he says that any tentative time-frame set for the white-topping project is difficult to maintain due to unforeseen challenges.

“The corporation faces several hurdles in switching to the innovative concept of laying rigid pavements, which is a shift from the conventional flexible pavement known as asphalting. We did not expect to face these problems while deciding the deadline,” says KT Nagaraj.

Cool temperature between 26 degrees Celsius and 30 degrees Celsius is ideal for white-topping. It prevents the evaporation of water during the road-curing process that is essential for the concrete to set in. “If subjected to hot weather, the water-cement ratio in the white-topping can be disturbed. It is just that rain should not spoil the process of concretization while it is being applied, especially during the initial setting of concrete. Rain does not affect the concrete-mix once it has been laid and allowed to remain thus for 3-4 hours. After that, it just hardens and retains the same composition even if it rains,” explains Nagaraj.

With work proceeding at snail’s pace and activists crying hoarse over the lack of scientific design and specifications, the project has irked many. One such person is RTI activist Anil Kumar who was upset by the quality of the white-topped stretch in his locality (20th main road Koramangala). Through an RTI filed in March this year, he retrieved all the tender documents, work orders, road design, and traffic studies signed by BBMP for Package 2.

The tender document of Package 2 clearly outlines the terms and conditions of the proposal in its entirety. However, there is one detail in particular that stands out in all the documents when studied. The timeline set is 11 months for the intended period of completion, which clearly specifies “including the monsoon season.”

The following text has been extracted from the tender document and the same detail can be found in Package 1. 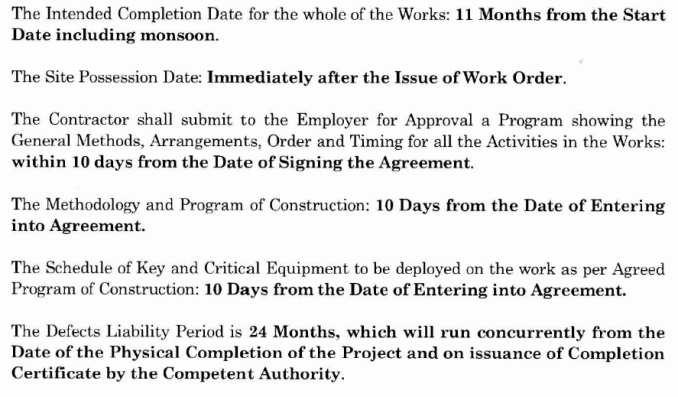 This begs for a pertinent question to be asked. If the BBMP was ready to work during monsoon while putting out the tender for Rs 972.68 crore, of which Rs 95.57 crore has been used up already, then why was the work stalled ?

That is not all. The document also says that the contractor must give a yearly update of white-topped roads every year before the monsoon season and after it, in a compliance report to the BBMP engineer. The condition of bridges, culverts and drainage system must be mentioned in this report.

Despite the 11-month deadline on record with specific consideration of the monsoon, Nagaraj says that cementing of roads in urban areas is not practically possible to accomplish at a fast pace. In this media report as well, he said that many days of continuous sunlight at a stretch was needed to go ahead with the project. 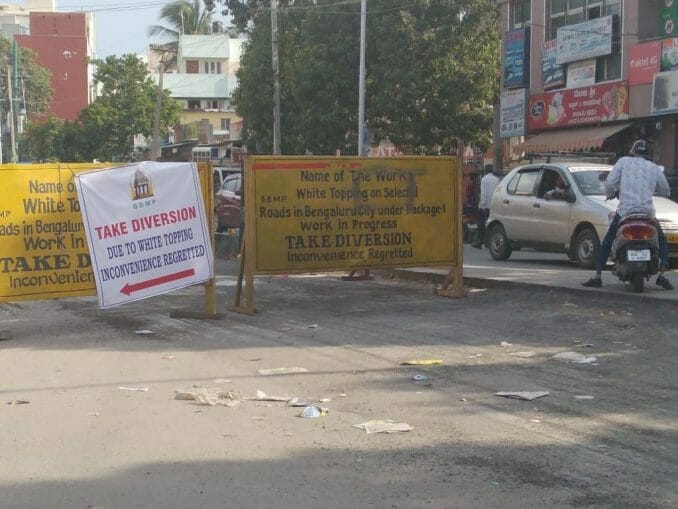 Sorting out issues with traffic police

Meanwhile, a meeting was held between Karnataka’s Chief Secretary TM Vijay Bhaskar on July 13th and the traffic police. Further to this discussion,  the BBMP received written permission on July 30th from the traffic police to go ahead on four stretches:  Hebbal to Hennur Road, Nayandanahalli to Summanahalli(Left Hand Side), Rajkumar Smaraka to Summanahalli (Right Hand Side) and West of Chord Road Toll gate (Left Hand Side).

Traffic diversions have been put in place from August 27th onwards to start the work. The information in the table below is taken from the press release issued by the Palike to inform the public of the diversions to take while travelling from Hebbal Flyover and Summanahalli flyover junctions. Signboards have been placed to ensure the traffic flows smoothly at appropriate spots.

In addition, there is another stretch which could also be diverted shortly. To finish the white topping of Outer Ring Road close to CV Raman Nagar, the department is considering the diversion of traffic from Mehkri Circle to Sadashivanagar.  The BBMP is finalizing details on this before issuing an official notice.

Permission for diversions can only be given in phases as the marked roads have high traffic concentration. Extensive work is needed apart from the laying of concrete, which holds up the project every time. This is because it also includes building medians, footpaths, side drains, shoulder drains, inserting drainage ducts every for 100 metre intervals, providing street lighting, and coordinating traffic signals.

In particular, traffic police are concerned about the jams caused by trucks transporting raw material.” High density corridors such as the Outer Ring Roads have heavy traffic. Earlier, we thought we can finish on time, as we assumed we could get ready-mix concrete more frequently. Cement manufacturing company, Ultra Tech, has plants 8 to 10 plants across the outskirts, from where the ready-mix concrete is transported in trucks that are ultimately not allowed on the roads until 11 pm. For the fear of road-accidents and congestion, trucks are not allowed during the day according to thee procedures of the traffic police to avoid traffic obstruction. Not much is possible within the four to five working hours permitted between 11 pm to till 4 am. Progress becomes very slow,” explained KT Nagaraj.

A minimum of sixteen days is needed to complete the white-topping along a 1-km stretch with two lanes, and getting this precious time is the biggest challenge of the Palike.  “This is largely dependent on the road’s width and length because certain roads have four lanes. Covering the entire road with concrete on one side of the median takes a minimum of 8 days. We try to lay concrete on 300 m of road  on a daily basis. After this, another 21 days is needed for curing. For all the components to be ready to go, in a complete fashion, it takes at least 40-41 days,” Nagaraj explains.

On another issue with the traffic police, Additional Commissioner (Traffic) R Hitendra had written to BBMP asking them to fix the unfilled edges causing accidents. This had caused somewhat of a rift between the two departments,  Bangalore Mirror reported.

The BBMP Chief Engineer denied such differences saying that all officials concerned are simply just trying to do their job. “Traffic police are trying to ease the flow of traffic. It becomes difficult to divert traffic and maintain discipline. There is some lacunae that needs to addressed on all roads where work has commenced. The unfilled edges are only at the curb of carriageways, left aside for water to flow into the drainage. ” he said.

A completely new list of roads for white-topping was announced recently. Not high density roads like the Outer Ring Road network, but this time around, major roads with alternative routes easily available have been identified to meet the deadlines faster. The white topping of these 42 roads will be taken up after a tender invitation is made in September.

So, will weather play spoilsport again? Not this time, supposedly. Basavaraj R Kabade (Executive Engineer-Projects) said in this report that though heavy rains have started, they plan on finishing the project during the short dry intervals between the rains. The contractors could be fined heavily if the work does not get executed on time. But this would not be applicable to delays caused by the traffic police, who sometimes withhold clearances for diversions and permission to commence work.

The BBMP says it is trying its best to salvage the situation and learn from past mistakes. As for the real goal of the mission, not everyone is convinced. According to BBMP opposition leader Padmanabha Reddy, in whose ward white-topping has been restarted in HRBR layout, the project is not going to help Bengaluru, where wear and tear of roads are high due to the increasing vehicular population.

“Only about Rs 1.5 crore is needed to do up one asphalted road, but white-topping is unnecessarily ten times more expensive. This project is a tactic to win over voters. What is the need for white topping when there is TenderSure? The council and the government is theirs, and they still fail to coordinate on this issue,” says Padmanabha Reddy.

The only open space in BTM is fast becoming a dumping yard. Residents blame the lack of fencing for this.

Carnatic music concert in the cinemas

Even as Sewage Treatment Plants are being built near two Bengaluru lakes to improve their water quality, the Vrishabhavathi river has turned dark yellow due to pollution. Catch up on this and other news from the city over the past week, in our roundup.