Bruhat Bengaluru Mahanagara Palike seems to be serious this time, in taking steps towards implementing the waste segregation and management compulsorily in the city. For the second time in this week, the BBMP has issued an advertisement that announces fines for various offenses, in accordance with the Karnataka Municipal Corporations (Amendment) Act – 1976.

The BBMP advertisement signed by the Commissioner states: “lt has been noticed that even after repeated notices the guidelines given are not being followed. BBMP will henceforth strictly enforce the rules and regulations and defaulters will be fined as detailed below.”

1) Littering, spitting, urinating, open defecating, committing other acts of nuisance on road, bus station, railway station, street, playground, park and other premises of public utility – these will attract Rs.100 for the first time, and the second time and subsequent offenses will be fined Rs.200.

3) Failure to comply with any lawful directions issued by the Commissioner to ensure cleanliness and hygiene of road, bus station, railway station, street, playground, park and other premises of public utility: Rs 100/ for first time, Rs.200 for second and subsequent offenses.

4) Failure to segregate and hand over garden waste, inert waste, sanitary, non-Bio degradable and bio-medical waste or any other category waste separately to the Corporation for the purpose of
handling and transportation of the Wastes in the manner specified by the Corporation – Rs.500 for the first time offense,­ Rs.1000 for second and subsequent offenses.

5) Irregular deposit of rubbish or filth or any solid waste – Rs 100 for first time, Rs.200 for second and subsequent offenses.

6) Allowing filth to flow in streets – Rs.100 for first time, Rs. 200 for second and subsequent offenses.

7) Depositing carcasses of animals or filth in improper place – Rs.100 for first time, Rs.200 for second and subsequent offenses.

8) Dumping of building waste irregularly – Rs.1000 for the first time, Rs.5000 for the second and subsequent offenses.

The BBMP Commissioner has also designated Assistant Executive Engineer or Assistant Engineer of every ward to be the penalty-imposing authority.

Two days ago, BBMP had issued a circular announcing the sanitary waste collection centres and phone numbers of the health inspectors concerned, in the 22 wards designated for Kasa Muktha pilot project. The list follows. 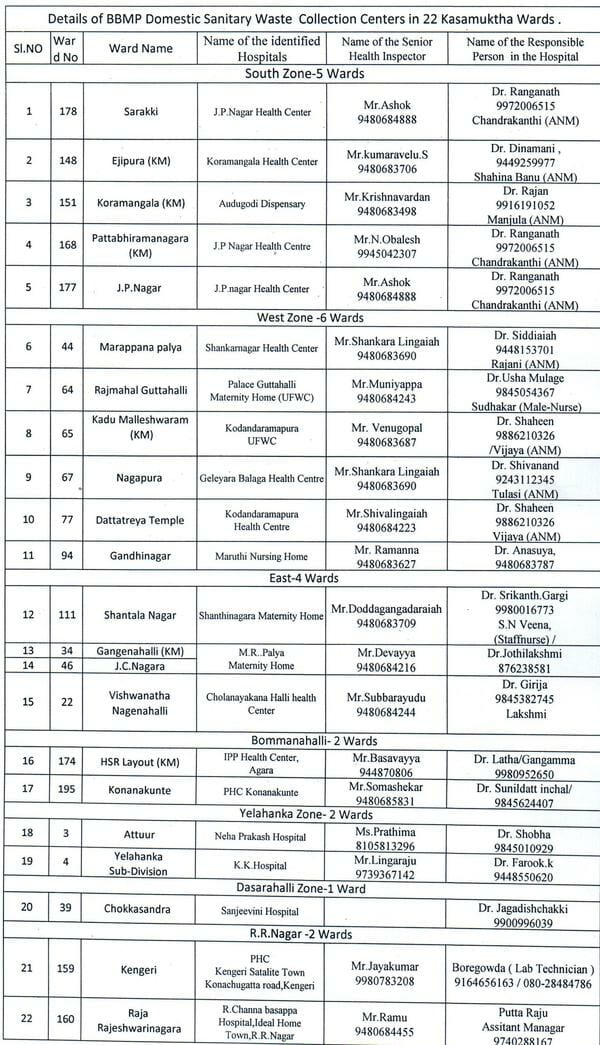 R Roshan Baig, INC, won the 2008 Assembly elections from Shivajinagar by a large margin. Learn more about this former Minister and five time MLA, cases he has been accused in, his assets, performance and funds utilisation.

Sewage dilemma at Ibbluru: Why residents, lake and park suffer

From a pretty lake Ibbluru lake has been messed up in five years. Now suddenly sewage is flooding the park beside the lake too. How did this happen?