The draft proposal for BBMP ward delimitation has been notified in the gazette. The idea is to improve services and fund allocation in the newly-added areas of BBMP, but this can’t be achieved through the current proposal.

According to the 74th Constitutional Amendment, urban local bodies (ULBs) with population of more than three lakh were mandated to constitute wards and ward committees. Wards and ward committees provide a mechanism for participatory democracy at the grassroots level and ensure services and resources are allocated on an equitable basis for good quality of life to citizens.

To ensure equitable services and resources, the area and population of wards are kept uniform. Money is allocated from the ULBs’ annual budget, and each ward gets its equal share of health inspectors, engineers, funds for repairs, and so on.

Now, this is the most important part – over the last 20 years, Bengaluru has seen explosive growth in population. The municipal corporation grew too – it added 110 villages around the city to become the Bruhat Bengaluru Mahanagara Palike in 2008. The core (old) areas had 132 wards, and the new outer lying areas added on 66 new wards, to make a total of 198 wards in BBMP.

Given the increase in population and area, the need was felt to undertake a delimitation exercise to re-look at the number of wards in the city, to ensure all areas receive the right amount of resources for growth and development. Between the core and outer areas, there were large discrepancies in terms of ward size as well as population. 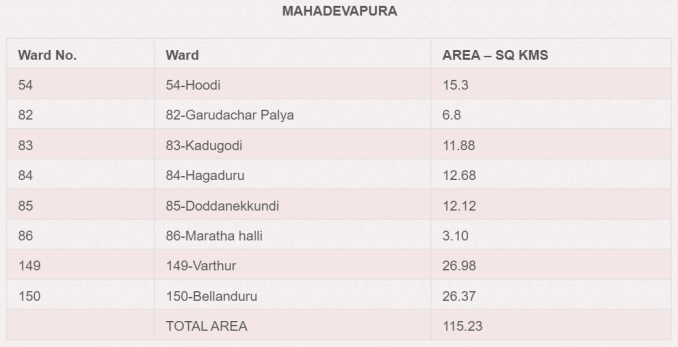 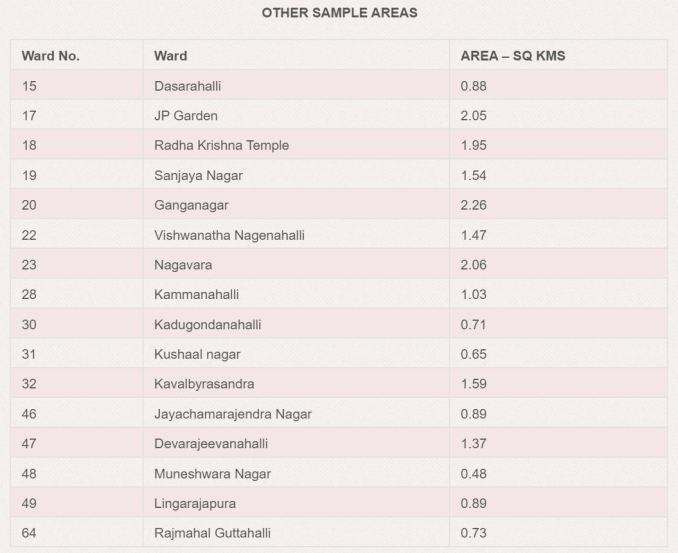 Consider the tables above. Each ward in Bengaluru gets just one Health Inspector (HI) and one Assistant Executive Engineer (AEE). What will be the difference in the workload and outcomes in Dasarahalli (0.88 sq km area) and Varthur (26.98 sq km) wards, for example, when both of them have just one HI and AEE?

The Expert Committee for BBMP Restructuring put forward their suggestions in 2015. Based on the growth in Bengaluru from 2001 to 2011, the Committee recommended 400 wards and five decentralised municipal corporations, with population of about 20,000 per ward for outer areas and 30,000 per ward for core areas. The 2011 population census data was adopted for making these recommendations.

The Expert Committee, however, was directed to limit the number of wards to 198, and hence they made recommendations accordingly.

As this exercise was completed in 2015, taking the data from the base year of 2011 made sense. Even with 2011 as the base year, huge increase in population was noticed in the outer areas. Mahadevapura assembly constituency (with eight wards), for example, grew its population by 140% between 2001 and 2011.

To ensure equitable distribution of services and resources, the boundaries of core and outer areas were re-drawn. An average ward population of ~42,000 was proposed, an increase from ~30,000 earlier. The total number of wards remained at 198, with some assembly constituencies seeing a decrease in ward numbers, others an increase. In Mahadevapura, the recommendation was put forward to increase the number of wards from eight to 10, an increase of just two wards.

The recommendations were tabled in 2015. But BBMP is waking up only now, carrying out the delimitation exercise before the upcoming corporator elections.

Why is this proposal problematic?

In the past five years, the demographic data used to make the recommendations have undergone a sea change.

Remember, the increase in population from 2001 to 2011 was 140% in Mahadevapura. From an absolute number of 1.79 lakh, the population increased to 4.3 lakh. The requests to the administration to serve the needs of this population skyrocketed, but the budget allocation was inadequate.

Though the budget allocation for outer wards was increased to three times that given to core wards (core area – Rs 1 crore; outer area – Rs 3 crore), the services remained the same – police stations, health inspectors, engineers, garbage collection, revenue officers, and so on.

Now the population has increased even more. Using government data itself, we have arrived at the most updated information on the population of Mahadevapura now.

That means, the average population of the 10 proposed wards of Mahadevapura will no longer be ~42,000 as mentioned in the delimitation draft. It will actually be ~75,000!

Case for a separate Mahadevapura corporation

Back to the Karnataka Municipal Corporation Act which states:

Given the above two statements, the natural conclusion is to create a separate Mahadevapura Municipal Corporation.

The problems of Mahadevapura are well known to BBMP and the state government:

The list of issues is long. The point is that all of these day-to-day issues can be traced back to ward size and the lack of commensurate budget and resource allocation to meet residents’ requirements. Residents have raised their demands several times, most recently last October, with the #MahadevapuraDemands protest.

Citizens can share objections to the draft notification by March 16

You can state your objection to the unscientific delimitation method being followed by the state government, which severely impacts our quality of life. Following a hearing and scrutiny of all objections, the government will issue a final gazette notification.

[This article is based on a press release from Whitefield Rising, and has been published with edits]

Attend this film festival that pays homage to the life and cinema of national award winning actor, the late Smita Patil. Nine of her films are being screened, including the Kannada movie, Anveshane.

What’s your wedding-spend? And did you think about it?

It’s true that weddings are once-in-life-time celebrations. But how do we celebrate – by spending lavishly, or do we need to find another way to celebrate it meaningfully? Do we care about the side-effect it can have?