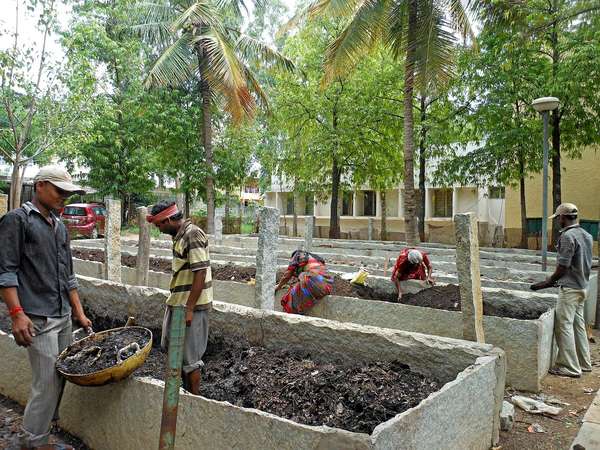 I had ended my first blog on garbage (you can read this blog here) with the observation that the Karnataka Compost Development Corporation was not making a great deal of money from the business of producing compost from city garbage, even though we had a long waiting list of satisfied customers and no marketing problem on our hand.

We had two problems with compost production. The first was that in a city that produced plenty of garbage – it was estimated to be around 1,000 tons per day then and is said to be closer to 4,500 tonnes now – there was a real shortage of good unadulterated organic garbage. As I related in my previous blog, I needed pure green waste unsullied by paper, plastic, soil and metal. We often did not have access to adequate quantities of that kind of garbage; most of it was purchased by farmers directly from the city vegetable market where it was available in abundance, and was taken away to compost pits in villages surrounding Bangalore.

This was a flourishing business. The city sanitary staff was bribed by privateers to divert good garbage away from us. We got the garbage nobody wanted, full of paper, plastic, metal and worse. This slowed down composting and increased the cost of processing, which comprised of various shakers, sieves and magnets that separated composted organic material from inert or noxious waste.

The second problem I faced was the necessity to constantly tend to my rotting piles of garbage. Any good organic gardener will tell you that good composting requires turning around garbage periodically to aerate it. That is easy to do at a small scale, but in my composting yard, I had a few earth movers working round the clock to turn over piles of garbage. I was burning up a lot of diesel in the process, which not only created more pollution at my work site, but added to my costs as well.

Then I began to recruit new staff; millions of them.

Millions of workers who did not demand a wage

My saviour appeared in the form of Eudrilus eugeniae, an earthworm species noted for their ability to chomp through compost and produce manure. After a consultation with the University of Agricultural sciences in Bangalore, we started a vermicomposting yard.

The purest of our garbage was moved under cover – coconut leaf thatched sheds were more than enough for our purpose – and our new recruits were unleashed on our compost, now neatly arranged in long, stone-lined troughs. They needed no goading to get to work. Each worm is a miniature composting tube, consuming about five times its body weight every day, to produce dark worm castings, rich in nutrients.

Eudrilus eugeniae multiplied like rabbits – I know I am mixing metaphors here – worked on Saturdays and Sundays and did not demand pay hikes. They also put my earth movers out of business. Each worm came up to the top of the pile to deposit its castings and all we needed to do was to collect these on a weekly basis. When they exhausted a pile, they moved on to the next pile that was prepared in advance for their arrival, through a gate that would be opened between two troughs. In other words, they moved on their own; I did not have to pay them a transfer allowance either.

We began to make a profit, as our production costs dropped and we began to produce higher value vermicompost.

However, the voracious appetites of our worms threw up another challenge. We were unable to provide enough pure garbage for these greedy fellows. If we fed them the usual rubbish supplied by the city garbage trucks – mixed with grit, plastic and paper, our worms would sulk, hang around in rowdy groups and parade around with placards reading, ‘Down down! Management’.

Why not we buy good garbage? I thought. After all, if segregated green waste is what we desperately want, we could actually put a value on such waste and buy it; that would mean that we also share our profits with those households that segregate garbage.

We made presentations to our shareholders, which included the Bangalore City Corporation as well. Our deal was that we would be willing to share our profits with a group of citizens in any part of the city, if they were able to supply segregated green waste. I thought we might have a good thing going here, because there were many groups that were interested in segregating, but who lost their way because they had no land locally available for undertaking decentralized composting. Our arrangement would result in winners all around. Households who segregated garbage would get paid for their effort, we could get good garbage and our worms would happily begin to feast again.

Sadly, the idea did not sell well. Our presentations were not glossy enough for the City Corporation. They were enamoured of private business interests that blew them away with promises of magical imported technology that would make all their garbage worries disappear overnight.

Worse, we could not even get the City Corporation to buy back our vermi-compost for their parks and gardens. Instead, the Corporation continued to spend considerable money buying so called manure from private producers.

I say, ‘so called,’ for a reason. We obtained a sack of manure purchased by the City Corporation Horticultural Office and tested it for its nutritive value.

It turned out to be half-burnt coconut husk; comprising of nothing but inert cellulose fibres.

This was originally published on Raghunandan’s blog in Accountability India, and has been republished by Citizen Matters with his permission.

About T R Raghunandan 10 Articles
The author has not yet added any personal or biographical info to her or his author profile.

Elders reach out to the young

Meet Senior Citizens Bangalore, an NGO run by energetic 76 to 80-year olds, working for the empowerment of needy children.

It’s high time BMTC got people with disabilities on board. Here are five steps to ensure this.

A recent survey finds that even the bus stations included under the Accessible India campaign are unfriendly towards people with disabilities. Lower fares, better infrastructure and participatory planning can ensure the BMTC is equally accessible to all.