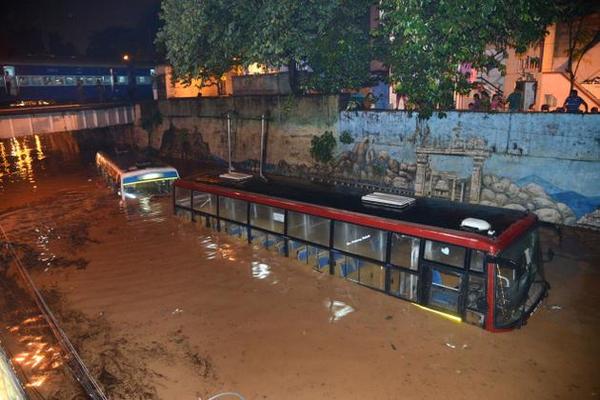 Whenever it rains in the city, the drains in the city choke. It is a common sight to see the railway underpass near Anand Rao Circle on Subedar Chatram Road holding loads of water, not letting any vehicle pass through. Normal life in the surrounding areas goes out of gear.

Now, as per the instructions of Ramalinga Reddy, Bangalore District In charge Minister, Mayor Shantakumari and BBMP Commissioner M Lakshminarayana, BBMP officials have prepared a plan to construct a new side drain, within four months.

The Palike plans to lay pipes measuring 1200 mm to 1500 mm diameter from K E B office to Police housing quarters and cover crucial half kilometer stretch. The water will be diverted to the major storm water drain near Platform Road (after Mantri Mall.)

Speaking to Citizen Matters, Uday Kumar, BBMP Assistant Executive Engineer for Chickpet ward said, “The survey has been completed and the problem has been identified. In a week’s time, project cost will be estimated. It might cost approximately about Rs 1.25 crore. The project will be done by Karnataka Rural Infrastructure Development Limited.”

Flooding problem in and around Anand Rao Circle has existed for the past three decades. This area is old and unplanned, with the pipes and drains laid at a higher level than the roads.

The pipes that exist below the railway tracks pass through V V Giri Colony. Land in V V Giri colony has been encroached and people have built houses over the drains, as a result of which pipeline and manholes have collapsed. Whenever it rains, the underpasss floods as water cannot go anywhere else. 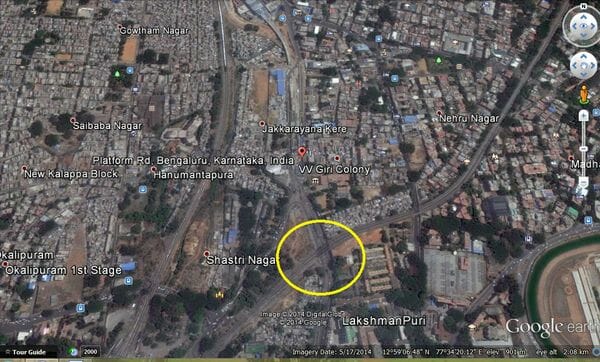 Adding to the problem is the fact that the existing drain running from Subedar Chatram Road to Kino Theater is too small, as it was built many years ago. The water accumulated on the railway tracks too falls into the underpass, which leads to extra water.

Anand Rao Circle connects many small streets like the Subedar Chatram Road, Ressaldar street, Jayachamarajendra Wodeyar Nagar, V V Giri Colony and Nehru Nagar. There was a lake called Jakkarayana Kere once nearby, which does not exist anymore.

Ramesh, a resident of Akkipet, owns a dry cleaning shop on Subedar Chatram Road from past 40 years. He says: ”The railway bridge on Anand Rao Circle was constructed 30 years ago and since then, each time it rains, it floods in areas like V V Giri Colony, Nehru Nagar, and JCW Nagar. Majestic Bus Stand was a lake once upon a time and exhibitions used to take place beside the lake. During the tenure of ex-chief minister Gundu Rao, the government constructed a bus stand over the lake.”

The Karnataka Welfare Association for The Blind, an NGO which runs a school for blind children is situated on the same stretch. S Parashivamurthy, the principal says, “Mobility training is important for the blind children. But when it rains, it becomes difficult for disabled children to move on the flooded roads. I request the government to build the pavement and put railings on both sides of the road, so that the inconvenience can be avoided.”

The school authorities had brought the problem to the notice of then-Women and Child Welfare minister C Motamma years during S M Krishna regime, to no avail.

Putta Raje Gowda who runs a government provision store in Ressaldar Street, recalls the trauma of September 25, 2014: “Around 8 to 10 ft water entered the locality and people were in deep trouble.” He also complains about BBMP officials not checking and instructing encroachers, because of which the problem multiplies. 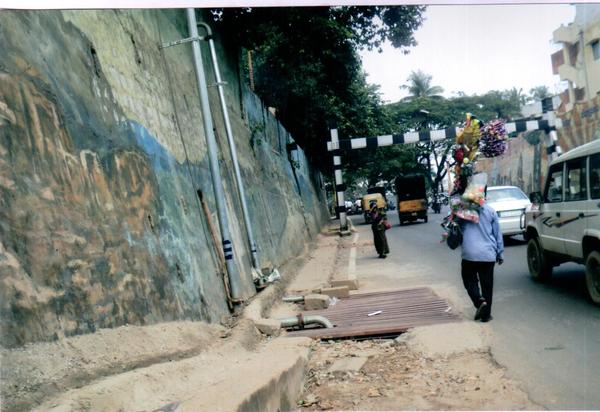 Many residents who have been staying in Ressaldar Street from past 40 years have to be rehabilitated elsewhere, to construct a proper drainage system to address the issue, according to BBMP officials.

Another low-lying area Jayachamarajendra Wodeyar Nagar housing over 2,000 families also experiences flooding every shower. Mohammad Shafiulla, a resident of the area for the past 40 years says, “I had to close down my mutton shop because each time when it floods, I have to clean my shop – there would be knee-deep waters and most of the material would go waste.”

At present, the palike has installed two 10 HP motors pumping out water. “On the very next day after the rains, the Palike pumped out the water in 4.5 hours,” says BBMP Commissioner M Lakshminarayana.

Traffic in and around the underpass on Subedar Chatram Road poses a problem whenever it rains heavily. Additional Commissioner of Police, Traffic, B Dayanand says: ”Most of the times traffic police themselves cover the potholes instead of waiting for the civic officials to address the issue, keeping the traffic in mind.”

It remains to be seen how the BBMP will complete the work of reconstructing drains in four months.

For many northeastern migrants in Bengaluru, CAA-NRC a ‘grey’ area

Many members of Bengaluru’s northeast community support the NRC, but acknowledge that the issue is complex

IAS officials get transferred every now and then. But it’s different this time—people are rallying behind an officer, Subodh Yadav, who was working on setting right garbage problem in Bengaluru.

E-waste is going to be the biggest waste nightmare Bengaluru will see, in a few years. This is what Saahas has been doing to spread awareness on it.