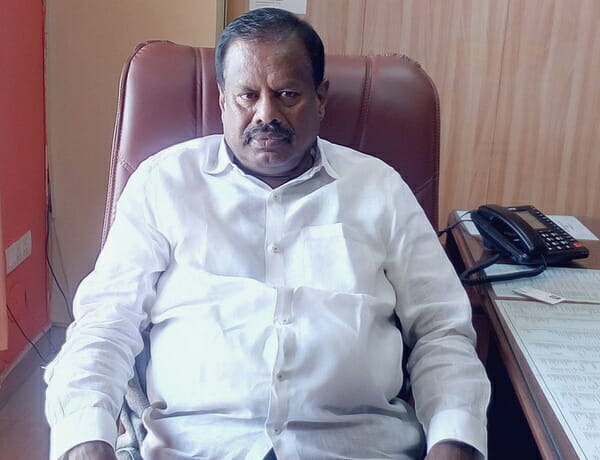 Karnataka Compost Development Corporation (KCDC)’s waste composting plant at Kudlu near Hosur-Sarjapur Road Layout in Bengaluru has been in news of late for all wrong reasons. The plant receives on an average 350-500 tonnes of waste from four Assembly Constituencies in Bengaluru – Bommanahalli, BTM Layout, Mahadevapura and Bengaluru South, according to officials in the plant.

However, the functioning of the plant has not been upto the standards. Residents nearby complain of unbearable stench from the plant, and letting of leachate into the lake nearby. Residents have been demanding for the last few years, that the plant be closed.

It was at this juncture that A Kenche Gowda took charge as the Chairman of Karnataka Compost Development Corporation (KCDC). Having worked as the General Secretary of the Karnataka Pradesh Congress Committee (KPCC) for nearly 16 years, he believes the State government has vested him with the responsibility of fixing issues plaguing KCDC.

The KCDC is mired in controversies, right from letting leachates from the waste processing plant to Somasundarapalya lake to the foul smell emanating from the plant. With only a year left for the state Assembly elections, how will the new Chairman address these concerns? Citizen Matters brings a you detailed interview with the Chairman.

You have taken over as the new chairman of KCDC. What is your assessment of the situation at the compost manufacturing body? How is it functioning?

KCDC has only one functioning unit at present, and is working smoothly as far as waste composting is concerned. In fact, the BBMP has spent Rs 60 crore in last two years to upgrade the plant. The amount was spent on buying new waste processing machines, installing bio-filter technology for odour control, construction of new shed to cover the plant. It has been renovated well.

What is the quantity of garbage KCDC receives every day? How much of it is pure wet waste which could be used in making organic manure? And how much is mixed waste?

We at present receive anywhere between 350-500 tons of waste everyday of which 80-85 per cent is wet waste and remaining is mixed waste.

Has segregation of waste in the city helped in anyway to get more quantity of wet waste in KCDC?

Yes, it has helped to some extent, though I cannot quantify it.

What do you do with mixed/dry waste?

We segregate plastic from the waste and convert it into blocks. The plan is to generate electricity using plastic.

What is the quantity of wet waste compost prepared in KCDC? How do you certify the quality of vermicompost and organic manure?

Depends. If we get 500 tons of waste per day, 100 tons of compost can be generated. There is a standard procedure in place to ensure the quality of compost. We do not compromise with the quality.

But in May 2015, KCDC was involved in a scam of buying vermicompost from Terra Firma and the private firm was allegedly supplying burnt garbage to KCDC with the label of vermicompost?

We had immediately cancelled the agreement with Terra Firma and we no more buy compost from outside. We only sell what is produced in KCDC plant.

(Note: Citizen Matters had blown the lid off the vermicompost scam last year.)

How do you sell the compost? How much revenue does it bring to your exchequer?

So are you running under loss?

Yes. We have no funds even to pay to the labourers and staff who are 70 in number. Our monthly expense for Kudlu plant is around Rs 50 lakh which includes salaries to workers, diesel purchase, electricity bill and maintenance. Earlier we used to manage with the money that we would earn by selling compost. But it is not happening in last one year.

It’s not just the Agriculture Department, we are also supposed to get our dues from the BBMP. The BBMP has to pay us Rs 650 for crushing one ton of waste. We have crushed 60,000 tonnes of waste but haven’t received a single rupee. The State government hasn’t sanctioned any funds to KCDC so far. We have the burden of repaying loans amounting to Rs 4 crore.

How are you going to manage the situation?

After I assumed charge, I explained the situation to the Chief Minister and requested him to allocate Rs 20 crore for KCDC’s functioning. This, I have asked knowing that the BBMP will never be able to pay us the dues, as the civic body itself is running under loss. I hope the government allocates the fund in the coming budget.

Meanwhile, we have also planned to supply compost directly to Raitha Seva Kendras in March, to clear the compost stock.

Is BBMP cooperating with KCDC?

HSR Layout residents have once again raised their voice against the foul smell emanating from KCDC. Why is this happening every time? Isn’t there a holistic approach to solve the problem?

Situation is not as bad as portrayed to be. I agree that there will be smell when such a large quantity of waste is processed in the unit, but the stench has reduced drastically due to installation of bio-filter system for odour control.

How many bio-filter systems are functioning?

At present, we have one functioning unit. The second unit will start soon. Stench can be reduced further by completely closing the shed, but that would create suffocation for the labourers.

But the residents are repeatedly complaining about the stench and are demanding for the closure of the plant.

Weren’t all those buildings constructed with BBMP’s permission?

Yes. 2004 onwards buildings mushroomed on the Eastern and Southern side of KCDC. The BBMP granted them permission by stating that the building area falls within the buffer zone and hence the builder will be responsible for any future events and they they need to vacate the property if the situation demands. Now following the NGT verdict, we have decided to issue notices to all those apartment owners.

What has been done to prevent leachates contaminating the groundwater table and Somasundarapalya lake? Is leachate let to the lake even now?

Leachates do not enter Somasundarapalya lake. We have taken steps to prevent it. Leachates generated in the plant are transported in trucks to the BWSSB’s sewage treatment plants. Maybe a small quantity of leachates enters the lake. But there is no water in Somasundarapalya lake to get polluted.

Soon after you took charge, you announced that Bengaluru’s garbage will be transported in goods trains to Kolar and Madhugiri. When and why will this happen? Can you explain the logic behind the move?

This plan is only in the discussion stage. With the closure of almost all landfills and the wet waste processing plants in the city not functioning efficiently, we need to find an alternative – a place where Bengaluru’s garbage can be transported and processed outside the city. That is why we visited Kolar and a few other places to check the viability. Transporting waste through goods trains that chug along the existing railway tracks is feasible as it doesn’t require additional investment. If we do not find a place for waste processing now, the city will be in a huge garbage mess after one year.

There has been resistance from people of Kolar for this plan…

Opposition is purely political as the Assembly election is just a year away. Also, people of Kolar are misled with the information that waste processing units will be developed in KGF and it will impact their lives. But our idea was to develop the plant in abandoned BEML land which is spread over 1,000 acres. Not necessarily that we intend to set up the unit in Kolar. It could be in Madhugiri, Ramanagar or somewhere close to Gowribidanur. The fact is we need to establish at least four plants around Bengaluru where the waste can be processed in the coming years.

We have also planned to offer free electricity and compost to the affected residents in the areas within 5 km of radius where processing units will come up.

What is KCDC’s role in this?

Due to failure of privately managed composting units in BBMP limits, the State government has asked KCDC to set up new plants for composting whole of city’s wet waste. So all the new units will be developed and managed by KCDC. We will not only compost wet waste scientifically, but also generate biogas and electricity. If the government allocates funds (to the tune of Rs 100 crore) for this project in the coming budget, we will immediately start the work.

And what about the existing KCDC unit in Kudlu? Will it be closed?

Not soon, but may be in next 4-5 years, once the new processing units are capable of handling the entire cities waste. Kudlu plant will not sustain in the long run.

What new plans do you have for garbage management at KCDC?

Apart from setting up new waste processing units, in Kudlu we have planned to generate electricity from biogas. There is enough land available in the KCDC plant premises. Electricity generation will not only make us self-sustainable, but also will bring us revenue if we sell excess power.

When will it become a reality?

We need funds to materialise the plan. We are relying on the government’s allocation in the coming budget.

How is wet waste processed at the KCDC?
MLA backs citizens protesting against KCDC
Will the KCDC neighbourhood finally be free of smelly nights?
60,000 tonnes of waste dumped in KCDC landfill; composting stopped
Karnataka composting firm back in the limelight
Can of worms opens up after govt composting firm sells garbage as vermicompost
Govt composting firm to review ties with Terra Firma on supplying organic compost

“Middle-class senior citizens left in the lurch during lockdown”

The government had promised much during the lockdown – availability and home delivery of essentials, financial relief for senior citizens, and so on. Yet middle-class senior citizens have been left in the lurch.

Refining voter list not rocket science, needs only will power

Last week, a student Amulya Leona was charged with sedition for sloganeering “Pakistan Zindabad”. But is there really a case for sedition here? What does the law say?