This true story is typical of the experience of thousands of residents of Bengaluru who are at the mercy of ‘service’ providers like the municipal corporation (BBMP) and water supply (BWSSB).

In the first week of December, BBMP’s contractors began re-laying pavement stones in Jayanagar. Gangs of workers piled the dug up mud, concrete chunks, broken stone slabs and bricks all along the pavement, blocking my entrance. How do I get in and out of my home? I protested. The labourers suggested I step into the two feet deep drain and access my entrance. As a 75-year-old senior citizen with knee problems, I would have slipped on the mud heap and broken my leg, if I did that. 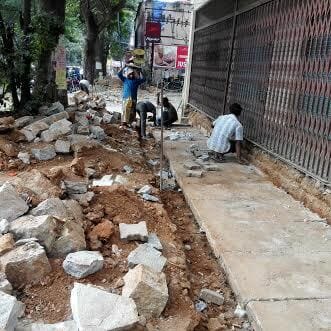 There was no supervisor on the spot.  It took a while to get a stone slab temporarily placed across the ditch and get into my flat. “Maneyalli  yaru irlilla (no one was at home),” the workers declared, justifying their digging up outside my entrance. True, I was away for two days, but that sentence acquired an ominous meaning two days later, as my battle with BBMP exposed anomalies that Bengalureans should be ashamed of.

While placing slabs they  broke my water connection, and precious water began leaking into the drain. They also broke and destroyed the concrete along my veranda on which I had installed iron grill for safety, so the grill stood precariously unbalanced. This is a busy footpath leading to a fast food joint next door. If the grill toppled, it could kill passersby.

What followed in the next 12 days became a saga of fighting criminal lack of accountability in a “service provider”. Phone calls to various officials brought no action. I ran to the BWSSB office to report the water leak. The employee said, “Barthini” (I will come) but no one turned up for three hours. When finally someone came, he said, “The BBMP damaged your pipe, so ask them to replace it.” The BBMP contractor in turn declared, “Water pipes are not our job. You have to get it done, at your cost.”

Contractors can break, but no obligation to make it again

The broken grill base, which is a safety threat? “Not our job,” the contractor’s supervisor declared, when he finally turned up at 2.15 pm (I had been waiting for him, from 9.30 am). “Our contract is to install slabs; the rules do not authorize repairing damage done to private dwellings.”

In other words, BBMP can break and damage my property with impunity, even if repairing the extensive damage will mean thousands of rupees expense to me. It was not necessary to dig under my grill to remove pavement slabs, there was enough clearance between the pavement and my veranda. I checked at other houses along the road, theirs had not been damaged, though the clearance was the same. It was then that a friend said, “If no one is home, they damage deliberately, then offer to repair it by collecting money.” Aha, so now I understand, why they said “Maneyalli  yaru irlilla”. My locked grill was a giveaway. I thought we need to be careful only about robbers when we are away, apparently we need to be wary of BBMP contract worker also. If you have to go out, that’s your problem!

I spent three hours making calls—engineer Rupesh, activists, the media (who gave me various contacts). Nothing worked. Try the local corporator, a reporter suggested (this is interesting—the corporator is a woman, but it is her husband who has to be contacted I was told .) He came an hour later, surrounded by deferential ‘followers”, saw my grill and declared, “We will repair the broken pipe, but you get the grill done yourself.” And walked away. When will the water leak be stemmed? The plumber was with the the corporator (correction–corporator’s husband) but didn’t bother to answer.

On what basis does this man decide that BBMP need not restore damaged private property? As a corporator (sorry, husband-surrogate) isn’t his job to ensure the rights of his area’s residents? If the real corporator is inexperienced, shouldn’t she at least accompany her husband on rounds, to learn the ropes? If I had a job and my husband turned up for work instead, would the government accept him and his authority?

I sent a personal email to the BBMP commissioner. There was not even an acknowledgement. Once upon  a time, citizens with grievances could approach  even a monarch, even a cow could ring the bell outside the palace, to seek redress. Not under our democracy. 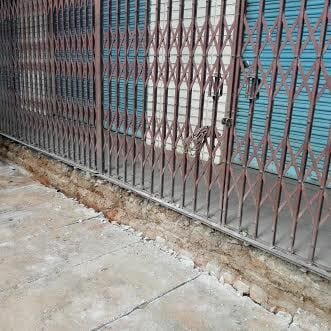 The last resort with no solutions

I met the local BJP MLA as a last resort. He heard me out, told me to write down the commissioner’s number, picked up the phone, spoke for a while, and said, “He will come to check today.”  “The commissioner?”  I asked, assuming that he had been speaking to the incumbent. The MLA retorted indignantly, “You think the commissioner will come to see your broken grill?”

Why is he outraged at the idea of a municipal commissioner being expected to visit a resident with a major grievance against the BBMP, when she is 75 +, and in no position to get the work done on her own? The commissioner has an official car at his disposal, paid for by taxpayers.

Prime ministers and chief ministers visit citizens in distress, Lal Bahadur Shastri resigned as minister, accepting moral responsibility, following the Ariyalur train accident, but how dare I even expect that a corporation commissioner would visit an elderly resident like me? Tch, tch. Not under our kind of democracy. Even the legislator, elected with a mandate to safeguard the interests of his ward’s residents, declared that nothing can be done (“Enu agolla”).

My husband is a Padma Bhushan awardee, between us we have two international and four national awards, four doctorates plus 11 gold medals. If this is the pathetic helplessness of even someone like us, what about others who are victimised by ‘service’ providers?

It turned out that the broken pipe was in fact an inlet from the BWSSB, so it was actually BWSSB water being wasted, and very much BWSSB’s job. The fellow from BBMP who took a look, did not even bother to check.

These ‘service’ corporations are headed by IAS officers, selected through a tough competitive exam that only the brightest candidates clear. Brightness, apparently, does not guarantee either accountability to the public or ethical-moral compulsions, or a commitment to do a good job and raise the efficiency of one’s team.

BBMP doesn’t bother to check that the contractor has done the job properly, the contractor never came (his ‘brother’ turned up, to look at my complaint, and took a picture of the damage, on his mobile. That was the end of it. Nothing happened for a week.) 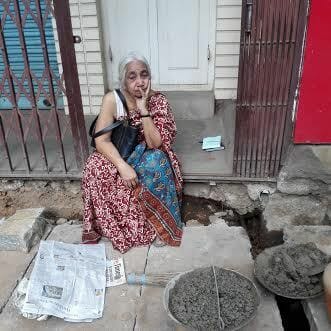 By outsourcing work, BBMP washes its hands of all accountability, the contractor collects his money and pushes off, victimised citizens have nowhere to turn. One MLA said last year, at a meeting of RWAs (residents welfare associations) that BBMP and garbage contractors are a “mafia nexus, enu maadokke agolla” (nothing can be done). Former lokayukta Justice Santosh Hegde too has said that “BBMP is a den of corruption”. He meant bribes, but damaging  a senior citizen’s private property and disowning responsibility, hits a new low.

Who makes such laws that flout elementary moral principles? And why do the MLA, corporator, supervisor and engineer—all public functionaries—support such outrageous ‘rules’ ? Citizens pay property tax, plus an additional solid waste management cess—only to see the garbage situation getting worse by the day.  The BBMP now wants to hike property tax, citing funds crunch (the same BBMP that bought fancy new cars for its babus recently, at an atrocious price of Rs 7.6 lakhs each – you can get fancy cars for half that price). We pay for the ‘service’ of water supply, and the monthly charges went up this year, by 20%.

I feel as disgusted as if I were sunk in a pool of filth. I can’t even say I want to get out—look what happened to Aamir Khan for saying that.

If you live in an apartment, you may find disposing wet waste difficult. But to compost this waste, all you need is an old bucket. Here’s a DIY guide on making your own ‘compost bucket’ and using the compost in your garden

Fire safety in apartments: Residents are also accountable under law

Builders are usually blamed for fires in apartments. But as per rules, it is residents’ responsibility to renew fire NOC, ensure inspections, etc.

A solution to the traffic mess at Marathahalli junction

Marathahalli junction is often riddled with traffic jams, thanks to the convoluted U-turns on the bridge here. Just introducing two traffic signals at the bridge could help solve the problem.