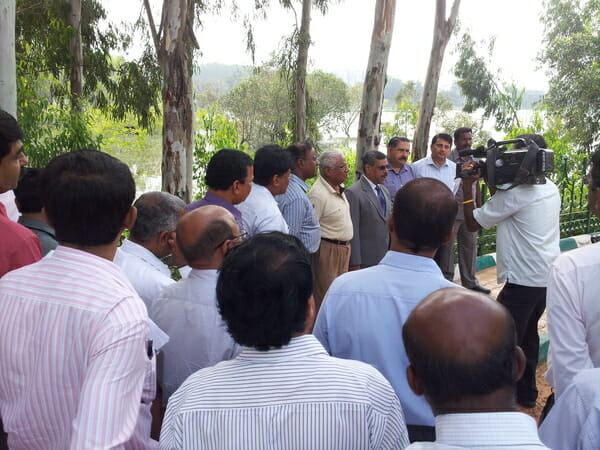 Upalokayukta Subhash Adi had visited Kaikondrahalli lake in October 2013, to study the work done by citizens and BBMP in restoring the lake. Pic: Meera K

Upa Lokayukta seems to be emerging as a new saviour for Bengaluru’s lakes. Subhash Adi, the Upa Lokayukta of Karnataka Lokayukta, has set a deadline of three months for BBMP to clear the encroachment of lakes by slums, with proper rehabilitation.

Upa Lokayukta came up with this order after reading the inspection reports on 183 lakes done by BBMP, BDA and other civic agencies that look into the lakes of Bengaluru.

The report by BBMP was presented to Upa-Lokayukta in November, 2013. Following this, Upa Lokayukta called all the top officials, the Bangalore Urban Deputy Commissioner, Commissioner of Bangalore Development Authority, Chairman of Karnataka Slum Development Board and lake engineers for a meeting on November 25, 2013.

Subhash Adi told Citizen Matters that he was appalled on the conditions of lakes in the city. The reports reveal that sewage lines were directly connected into some of the lakes, while six of the BBMP lakes were occupied by slums. He also asked BDA to hand over 13 lakes developed by BDA, back to BBMP in 15 days.

The reports submitted to Upa Lokayukta by civic agencies had details about 55 lakes of corporation, 115 lakes looked after by BDA, nine lakes under Lake Development Authority and four lakes under Karnataka Forest Department.

Shubhash Adi told Citizen Matters that out of 55 lakes managed by BBMP, 29 lakes were completely free from encroachment, while 20 lakes of BBMP saw encroachment of 23 acres of lakes by different structures like (buildings, temples, factory or military) “Since these encroachments were small in size, they were easily removed,” said Upa Lokayukta.

He said, “Engineers couldn’t take immediate action on slum settlements near lake. These slums are bigger in size and require to be rehabilitated. I have ordered the corporation and slum development board to immediately build temporary sheds till the permanent sheds are  built in three months.”

“Karnataka Slum Development Board (KSDB) will look into the rehabilitation of the slum dwellers. Corporation will spend money on the construction of temporary structures on the available government land at various places. Funds for this will be used by Rajiv Awas Yojana (Ray) scheme.  The permanent structures will be built by the funds from Slum Clearance department. If necessary, Bangalore Urban Deputy Commissioner will also help in providing land,” he explained.

Justice Subhash Adi also raised concerns about untreated sewage water being let into lake freely. He remarked that every apartment with more than 100 houses must have an STP. Though this is mentioned in the building bylaws, nobody follows it. These rules should be enforced strictly.

BWSSB has proposed an idea of setting up independent STP plants at each lake. The untreated sewage water that is now let into the lake will have to go through STP. The treated water will be let into lake and can be used for commercial, industrial and construction purposes. Already one such plant exists next to Iblur lake by BWSSB. But the Upa Lokayukta feels it is insufficient to treat the amount of sewage water that it receives.

He is impressed by the idea of reusing the water. “This will not only rejuvenate the lake but will also reduce the pressure on groundwater. Simultaneously, it will solve the sewage water problem and help get some income. If not immediately, over a period of time it will definitely help reduce the consumption of water in the city.”

“Even if the water is unused, the groundwater level will increase in that area,” he observed. “We will hold discussions on this with Principal Secretary of Urban Development Department along with the  BWSSB and other officials. They will study the idea in three months and come up with plans. Once this gets clearance, it will be put in force.”

Talking about the cost, he said, “setting up an STP doesn’t involve big expenditure. STPs can be set up at Rs. 4 crores; this is not a big amount as compared to Bangalore’s population and the present need.”

After removing encroachment on lakes, Upa Lokayukta looks forward to ensure protection of lakes. He was quite impressed with the initiatives of citizens staying near Puttenahalli (J P Nagar) and Kaikondrahalli lake to maintain these lakes. He said he would be delighted to see locals stepping forward to maintain it.

BDA develops lakes, but BBMP yet to take them back
Munnekolala Lake restoration progresses

The pandemic could be pushing Bengalureans towards a commuting option that ensures both social distancing and last-mile connectivity: IOT-based bike-rental services.

Catch up on news from the city this week, in our roundup

Budget speech by Chairman of BBMP Taxation Committee M Shivaraj, for the year 2016-17.