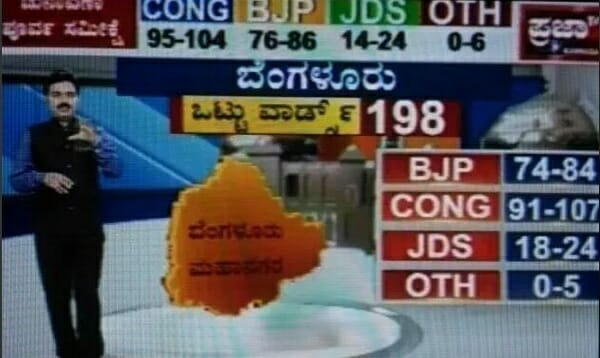 With most television/ print media exit polls predicting a majority for Indian National Congress party, but not enough to form the government, is the result going to be a BJP-JDS coalition BBMP council? We have to wait and watch till tomorrow to see the actual results but here is the compilation of all exit polls.

Most Kannada news channels have predicted that Congress will get more seats than the BJP, which is in quite contrast to what was predicted a few weeks before the elections.

How was the survey conducted?

Reporters of News 9 and C-Voter staff covered all the wards in BBMP on the voting day and compiled the data. Voters were asked several questions right from whether they were satisfied with the work of previous council to, whom will they blame for the poor condition of the city.

How did Public TV conduct the poll survey?

Which ward saw the lowest voter turnout in BBMP election 2015?

The recent declaration of BBMP to retain SAS values for tax calculation and not increasing the rate has come has a sigh of relief to the tax payers.