It has been a war between the animal lovers and Bruhat Bengaluru Mahanagara Palike (BBMP) in the last few days as the Palike proposed to limit the number of dogs that could be owned in residences. From online petitions to flooding the offices of the Animal Husbandry Department with letters and objections, pet lovers went on an overdrive to stop the administration on their tracks. #NotWithoutMyDog started appearing on social media, while people objected to not letting one person have more than one dog in apartments.

The Palike has proposed among other things microchipping for the animals, penalty for not cleaning up after pets, penalty for unlicensed pets, capture and culling of unclaimed animals and a cap on the number of pets (three dogs for a large house and one for an apartment). The pet lovers claim this proposal was an unexpected and unpleasant surprise that would allow pet owners to be harassed, especially in large apartment complexes where animals have become a bone of contention. The cap on the number of animals is what has irked most pet lovers in the city.

But this isn’t for the first time the Palike has proposed the exact same move. Every couple of years, the BBMP wakes up to this issue, brushes the dust off from old drafts and repeats the dance. So it isn’t really a surprise as claimed by the pet owners.

This move first came about in 2013 when the BBMP proposed the by-law under Section 344 of the Karnataka Municipal Council Act. It had listed 64 breeds that were allowed in residences and the also proposed to muzzle certain breeds including pitbull, Akita, Nepolitan Mastiff, Tosa, Dogo Argentino, Fila Brasileiro, Boerboel, Bull Terrier, Doberman Pincher, Rottweiler, German Shepherd, Mastiffs and crosses of all these to be muzzled in public places.

Come 2018, the draft is similar to the drafts of 2013 and 2016, with provisions many of which were the reasons the proposal did not get through in the first place.

The copy-paste job has even gone international with this draft. Part-III of the draft which lists out breeds approved for residential flats is almost straight from the hand book of the Housing and Development Board of the Singapore Government (this includes a spelling mistake as well – Bichon Havanese is spelt as Avanese). If you wish to see the rest of the breeds which are approved by the Singapore government, this link is where you check it out. The list by BBMP is here. 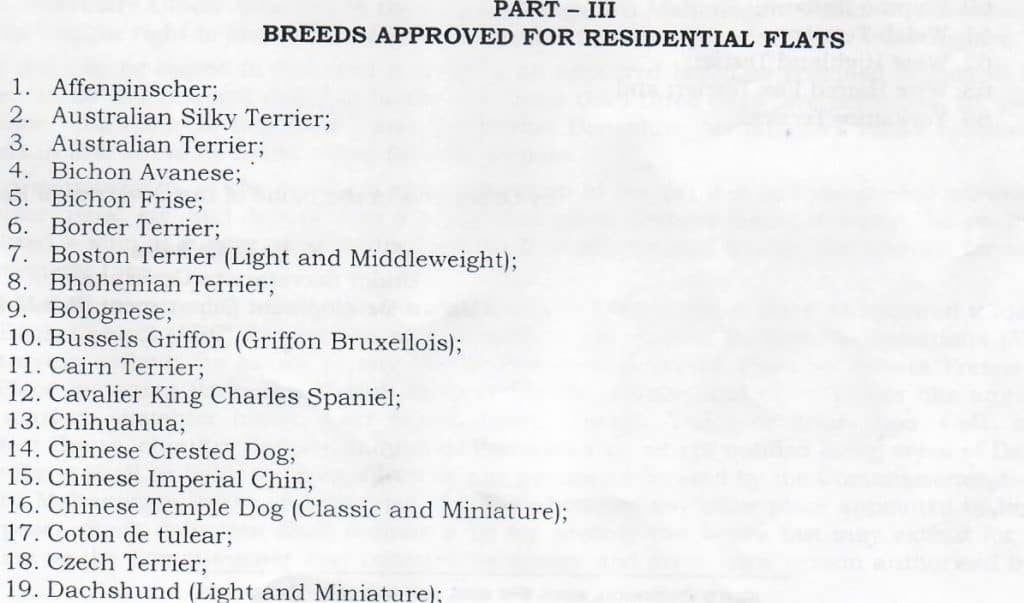 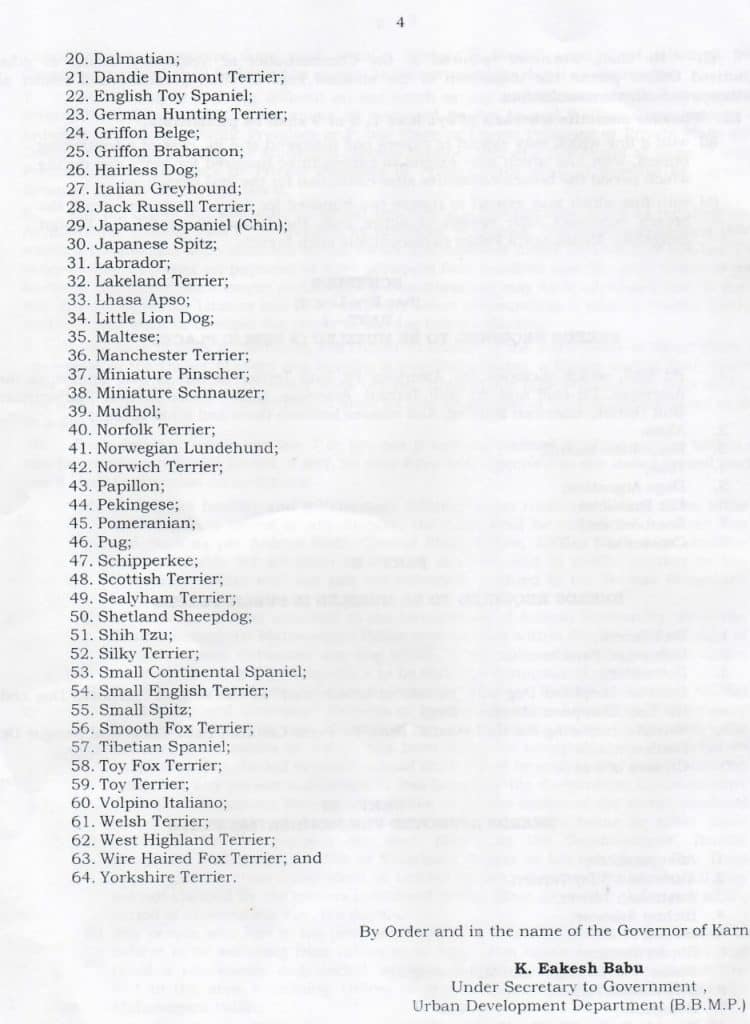 Dr Parvez Piran, former Joint Director, Animal Husbandry Department, BBMP, who was instrumental in introducing the by-law in 2013 says it is important to have a holistic view of having a pet in a crowded city like Bengaluru. “We can’t have five dogs in a small apartment. Think of the neighbours. But the idea behind the by-law was to get a semblance of control over breeders and ensure the stringent licensing of pets, not to harass pet owners.”

But even as the BBMP grapples with recycled ideas, the original intent behind the by-law which was pet licensing has been slack at best. As it stands, every pet owner in the city has to get a license from the Animal Husbandry Department at the BBMP at a cost of Rs 250 for which you need to have an updated vaccination card of the pet with two pictures at the Zonal headquarters of your area of residence. These licenses expire in March of every year and have to be renewed at a cost Rs 110 at the zonal headquarters again. However as many pet owners will tell you, this is easier said than done as the officers give the run around the mill.

In a bid to make life easier for the officials and the pet owners, citizen groups started licensing drives in the city. The first major drive happened in August of 2017 by the Cubbon Park Canines where officials ran out of stationery with the number of animals who were registered. Four more drives were done in Sahakar Nagar and Domlur as well. An idea was mooted with a letter to the Joint Commissioner suggesting the first part of Friday every week be dedicated to pet licensing, ensuring the officers were prepared for the drive. Priya Chetty Rajagopal, an active animal rights activist, says there was no response to it.

The question however remains. Why does the BBMP wake up a once every few years to reintroduce the draft that hasn’t passed muster as it did this time as well? Your guess is as good as mine, because our questions to Sarfaraz Khan, Joint Commissioner for health and Dr G Anand, Joint Director, Animal Husbandry remained unanswered.

Clean-up drive by parents of school students in Ramamurthy Nagar

A clean-up drive in Ramamurthy Nagar, initiated by parents of JGRVK School, not only looks to make a difference in the area, but also inspire people across Bengaluru to emulate them.

Last week, a student Amulya Leona was charged with sedition for sloganeering “Pakistan Zindabad”. But is there really a case for sedition here? What does the law say?