On December 30, 2018, the Bruhat Bengaluru Mahanagara Palike (BBMP) issued a public notice declaring all 198 BBMP wards ‘open defecation free’. It was approved by the BBMP council on December 27, 2018, three days prior to the distribution of the notice. This is a required criterion under Swacch Bharath Mission to be considered for higher ranking in Swacch Sarvekshan Survey 2019 which will begin soon. 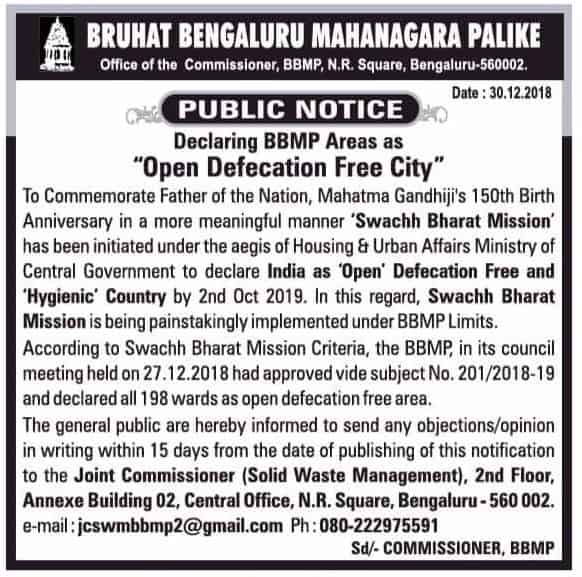 What is Open Defecation-free area?

According to the definition given by Union Ministry of Drinking Water and Sanitation in 2015, “ODF is the termination of faecal-oral transmission, defined by a) no visible faeces found in the environment/village; and b) every household as well as public/community institutions using safe technology option for disposal of faeces.”

What is safe technology? The document says that safe technology means “no contamination of surface soil, ground water or surface water; excreta inaccessible to flies or animals; no handling of fresh excreta; and freedom from odour and unsightly condition.”

There are checklists described to declare a city/village/Gram Panchayat open defecation free, according to a document released by the Ministry of Drinking Water and Sanitation. Animal excreta and open human urination do not fall under ODF yet.

While all the zones have been tagged ODF, the reality of the situation is different. In Kasavanahalli alone, early mornings and late nights witness plenty of people still using the surrounding shrubbery to defecate in the open.

There are almost no public toilets in the area that the floating population of construction workers and labourers can use. What toilets there are, tend to be dirty and ill-maintained, discouraging anyone from using them. This is the story of most newly added areas to BBMP where public infrastructure has not expanded yet.

The BBMP has invited opinions and objections in writing from the public, which can be submitted to jcswmbbmp2@gmail.com, or sent to the Joint Commissioner (Solid Waste Management), 2nd floor, Annexe Building-02, Central Office, N.R. Square, Bengaluru-560002, up to 14th January.

Note: Jude Weston, an intern with Citizen Matters, contributed to this story.

About Rahna Jacob 6 Articles
Rahna Jacob is an Intern at Citizen Matters.

What to do if the government cannot fix the broken streets and parks? Simple: do it on your own. This is the motto with which Whitefield Rising has been working.

Whitefield residents spread the joy of giving by planting saplings

My five-point agenda for a better Bengaluru

A willing and strong-willed Mayor who loves the city can achieve a lot in the year-long tenure. Here are five such things!