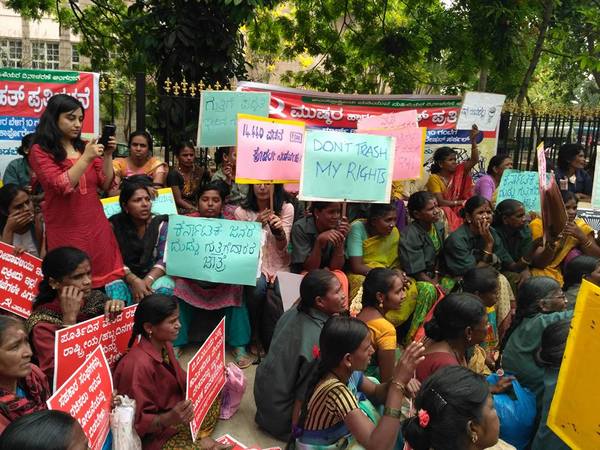 Even as the BBMP had organised exhibitions and other programs for Women’s day, more than a thousand women contract Powrakarmikas of Bengaluru gathered at the BBMP head office to ask the BBMP, why these working women were being denied their rights.

Workers from Indiranagar, RT Nagar, Koramanagala, Hegganahalli, Kengeri, Ramamurthy nagar, Gandhinagar, Banaswadi, Yelahanka and several other areas, braved threats from contractors and participated in the protest. The Contractor of Horamavu and Rammurthynagar has even threatened to fire the workers for being part of the protest.

Students, several activists and film-makers like B M Giriraj (Director of Kannada film “ Amaravati”) also came to offer support. The workers were seething with anger at how the BBMP which had organised a grand show for International Women’s Day, but failed to fulfill the rights of women powrakarmikas. The Mayor initially came out and asked the workers why there were protesting today! At this the angry workers asked if they were not women and their rights were not important. Workers were very angry that they were still not paid arrears from August 2016.

Gangamma of Banaswadi asked why the BBMP was treating them like dirt. The Powrakarmikas gathered had four main demands: payment of minimum wages, weekly off and festival, national holidays, leave, regularisation and direct payment of wages by BBMP.

2) Regularisation as promised by the Chief Minister Siddaramaiah and as has been decided by the Karnataka Cabinet BBMP Will regularize Powrakarmikas, but modalities need to be worked out so it will take time.

3) Weekly off, festival off and National Holidays off (as mandated in Karnataka Minimum wages rules 1958, Rule 24; Minimum wages Act 1948 – Sec 13(b) and the Karnataka Industrial Establishments (National and Festival Holidays )Act, 1963. Weekly off will be started soon. Commissioner will meet with the Union representatives next week to discuss modalities of weekly off on rotation basis.

4) Direct payment of arrears and future salaries Chief Minister has also ordered BBMP to do the same and it will happen in the next few week.

Based on the assurance of the Commissioner, the strike call has been withdrawn. We do hope that the BBMP will stick to their promises. This is the fourth time we have been promised action on the above demands. If there is no movement within the next month, we will have no option but to hit the streets again.

We hope that, this International Working Women’s Day, BBMP will work to protect the rights of BBMP Guttige Powrakarmikas who strive to keep the cities clean.

About Vinay Sreenivasa 18 Articles
The author has not yet added any personal or biographical info to her or his author profile.

The book “Selected Poems” – poems of Subramania Bharati has been translated from Tamil into English by Usha Rajagopalan. It gives an insight into the Mahakavi’s versatility while the short notes accompanying some of the poems gives an idea of the different facets of Bharati’s personality.

Some property owners in JP Nagar prove that with a little effort it is possible to get your due through straightforward means.