In his press meet, he accused the BBMP Commissioner and Chief Audit Officer of releasing Rs 179 crore for Programme of Works, violating the High Court and Karnataka government’s order to strictly follow seniority while clearing bills. The BBMP has released Rs 179 crore for works in different wards in K R Puram, RR Nagar and Yeshwanthpur legislative constituencies for works from various departments. When the Supreme Court has directed the BBMP to strictly follow seniority while clearing bills of contractors without succumbing to political pressure, how can the authorities release funds to clear the bills of these three constituencies? he asked.

He said this development happened in last one week’s time. He also wondered how the BBMP released such a huge amount when it has not yet cleared the pending bills of 2013 and 2014. The BBMP has been claiming of facing fund crunch. Yet they released the huge amount to the wards in selected three constituencies, he added.

“Apart from this, the authorities have also violated yet another circular issued during the Administrator’s period. The Administrator had made it mandatory for every work to be verified by Technical Vigilance Cell under the Commissioner (TVCC) before clearing the bills. But this procedure has not been followed while releasing Rs 179 crore,” he alleged.

Padmanabh Reddy demanded disciplinary action against the BBMP Commissioner and Chief Accounts Officer for their alleged involvement in the scam, failing which he threatened to move to the court.

In fact, the opposition leader went on to accuse the Mayor of calling off the monthly council meeting to save the face of the Commissioner. “They knew that I am going to raise this issue in the meeting today. The Commissioner is learnt to have requested the Mayor to call off the meeting,” he said.

Meanwhile, a group of contractors, under the banner Working Contractors’ Association protested on BBMP premises and rounded up BBMP Commissioner Kumar Naik, demanding that the BBMP clear their pending bills running up to crores of rupees. “The bills should be cleared in seniority basis to help the small and medium contractors,” said Association President K T Manjunath. 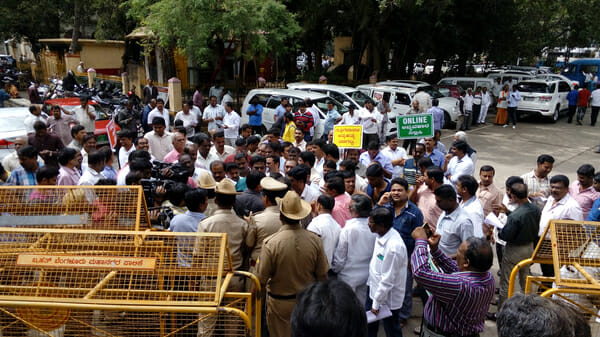 Kumar Naik, after assuring them of solving their problems, was faced with questions from media persons. Responding to the allegation made by council opposition leader Padmanabha Reddy, the Commissioner said that the BBMP has released only Rs 20 crore for Programme of Works. “However, I will verify if something has gone wrong,” he said.

Meanwhile, he emphasised that as BBMP is financially not in a good condition, they are not taking new development works this year, but had reserved Rs 1,200 crore for clearing pending bills. Pending bills alone amount to Rs 3,000 crore, Kumar Naik clarified.

We are proud of slums: Hemachandra Sagar

Prior to being denied ticket this time due the efforts of the BJP to maintain a ‘clean’ image, Hemachandra Sagar gave a quick interview to Citizen Matters on the work done by him in Chikpet constituency.