On May 17th, BBMP Administrator T M Vijay Bhaskar blew the lid off “development works” taken up in Bruhat Bengaluru Mahanagara Palike (BBMP), with a tweet. In his tweet, he said  that details of works completed and pending bills as on April 30th 2015 are displayed on BBMP website for transparency. He asked public to check the list of works and inform the officials in case of discrepancies.

With it, the Social Audit system was introduced in BBMP for the very first time. Enthused public, activists and new political parties got into action. With the data in hand, they went on inspecting the completed development works to verify if they were indeed completed and if at all the works were completed, what was the actual cost incurred for the work. Apart from aware citizens, volunteers of Aam Aadmi Party (AAP) Bengaluru unit too got into action. They collected data of various wards in BBMP and verified 25 projects in first one week. 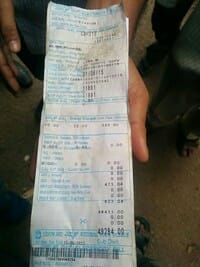 Social audit by AAP Bangalore reveals a BESCOM bill of Rs 49,254 in the name of borewell. BBMP refuses to accompany the team that conducted Social Audit. Pic courtesy: Ravikrishna Reddy

During the inspection, they also took along BBMP officials, to show them suspected irregularities. But, the conflict broke when AAP volunteers asked a BBMP Executive Engineer to accompany them to inspect borewell projects in Byatarayanapura ward. Joint Commissioner of Yelahanka Zone Sarfaraz Khan took objection to this and restrained Executive Engineer from visiting the spot along with AAP members.

In a Facebook post, the JC revealed that he was “disturbed to see people in the name of some political parties visiting the division, ward offices and asking officers to show records and take them to show places where the work has been done.”

“I welcome transparency of any kind, but there is a way of doing it. The concerned person/ political party/ individuals who want to do this should meet and give a representation to me and I will look into it and order the officials to do the needful. My officials are answerable to the government, elected representatives and the public, not to any political party. This uncivilised way of barging into offices and gaining political mileage will be dealt with severely,” the JC warned on his FB page.

This led to an online war of words between AAP leader Ravikrishna Reddy and the Joint Commissioner of Yelahanka. Ravikrishna Reddy was quick to reply to the Joint Commissioner’s status on his FB page, alleging the JC of working for a political party. “This is outright arrogance. This officer must know that our party members visited Byatarayanapura ward and gave a representation to the concerned officials two weeks back to give details on civil works listed in BBMP’s pending bills. They started creating files and photos only after that,” Reddy slammed.

Both the parties have justified their stand. Speaking to Citizen Matters, Ravikrishna Reddy explained why it was important to take an officer along while going for inspection under Social Audit. “After gathering details about a particular work, we request the concerned officer of the area to accompany us, so that they can explain us about what has gone wrong and why. Several officers have accompanied us in the last 10 days and we are doing Social Audit proactively,” he said.

He also said that a group of individuals have submitted a memorandum to the Administrator requesting to form a Social Audit committee comprising private contractors, civic representatives and retired BBMP engineers to verify development works.

On his part, Sarfaraz Khan said it was practically not possible for the officers to accompany each individual or political party on the field visit. “Tomorrow every political party will come to our doorstep demanding us to accompany them. Is it practically viable?” he asked. He said there were instances where individuals have complained him about pending work and he has taken action.

Lack of clarity in Social Audit

The concept of Social Audit is not new in an administrative set up, but it is rarely practised due to lack of information and other reasons. In the case of BBMP, lack of specific guidelines on implementing Social Audit has sparked a debate. While letting the cat out of the bag through Social Audit, the BBMP kept the auditing process almost open-ended.

Social Audit system exists in Mahatma Gandhi National Rural Employment Generation Scheme (MGNREGS) and in Jawaharlal Nehru National Urban Renewal Mission (JnNURM) scheme. Under both the schemes, specific guidelines have been laid for effective implementation of Social Audit. Ideally Social Audit is conducted jointly by the government officials and people who are beneficiaries of the government project / programme.
A circular on Social Audit in MGNREGS describes it as “checking and verification of a programme/ scheme implementation and its results by the community with the active involvement of the primary stakeholders.”

Retired IAS officer and anti-corruption activist T R Raghunandan while appreciating the initiative of the Administrator to introduce Social Audit, said the auditing system should be bound by a few basic rules. Micro-details of Social Audit like how to go for field inspection, whom to complain, how to complain, how the complaint will be addressed should be clarified to avoid confusion that arises in people’s mind.

“Social Audit need not be necessarily on the lines of MGNREGS. It can be tweaked for better. There are a few outstanding examples of Social Audit system in Andhra Pradesh which too can be adopted,” he said.
Generally, Social Audit involves formation of audit groups comprising elected representatives, NGOs and project beneficiaries and other experts.

Administrator T M Vijay Bhaskar has clarified that the BBMP officers need not accompany individuals or groups that take up Social Audit. “Public can collect information about development works from BBMP website or by applying RTI. They can do field inspection on their own and if they suspect irregularity in the project work, they can contact the concerned officer who will take necessary action. This has been done to bring in transparency,” he said.

He explained why he has not followed an institutionalised way of Social Audit like in MGNREGS. “Citizens in Bengaluru are more aware of the issues and development works when compared to rural population. There appears to be no need to create new awareness among citizens by forming Social Audit committee. Anybody who wishes to verify a project can do it on their own,” he said.

He also said that a team of 26 retired engineers from BBMP and PWD are checking the quantity and quality of works of which bills are pending. On asked if he has any plans to form a committee of retired engineers, civic representatives and private contractors for social auditing, he said he will examine the feasibility of forming the committee and then decide.

Over the past four and half years, 23 lakh more vehicles took to the roads of Bengaluru while the number of BMTC buses went up by just 20.

In what is seen as an alternative public transportation to BMTC, private cars and rickshaw, app-based service providers like ZipGo and Ola have entered into the arena of public transport system in Bengaluru. What’s the consequence?