Ravi Subrahmanya is a two-term MLA from Basavanagudi. He was associated with the RSS before being elected to the Assembly in 2008. His constituency has Basavanagudi, one of the oldest localities in the city and is home to the world famous Gavi Gandhareshwara Temple and Dodda Basavana Gudi – the Bull Temple. Unlike other BJP MLAs from the city, the legislator has maintained a relatively low profile. He made news when he invested Rs1.5 crore of the MLA LAD funds in a government school in his constituency. He has also been pushing the idea of Basavangudi Heritage Corridor for many years now to bring many of the historical/ religious spaces in one loop as a tourism initiative.

His vision for the constituency: https://www.youtube.com/watch?v=A_m_XByAmiM

Ravi Subrahmanya in the Assembly

Ravi  Subrahamanya was a member of Committee on Sub-Ordinate Legislation.

December 16, 2014: Ravi Subrahamanya requested the house under Rule 69, to discuss the occupancy certificate scam in BBMP limits, and lack of coordination among town planning department and BBMP engineers.

November 23, 2015: Ravi Subrahmanya participated in a discussion on garbage problem in Bengaluru, highlighting the failure of plastic ban and problems pourakarmikas face while segregating the collected waste.

March 22, 2016: He sought clarification regarding theft cases in City Railway Station, getting registered as ‘missing complaints’.

July 5, 2016: Ravi Subramanya asked the government about pending police recruitments in his constituency, and asked whether the government can re-constitute the boundaries of the police stations according to constituency and ward levels, to avoid jurisdictional problems. He also spoke about presence of wine shops in temple areas.

March 28, 2017: Ravisubrahmanya asked the government to give permission for multiple kitchen units, in Vishwabharathi layout. George clarified that the layout was a private one and was taken over by the BDA after the court order, and whatever facilities possible will be developed by the BBMP, and permissions will be given as per law.

Ravi Subrahmanaya in the news

December 1, 2014: In an interview with oneindia.com, the MLA spoke about the need for the government to bail out the debt-ridden BBMP to progress with its work. He feels that changes in the archaic ways of the civic body are long overdue. He also specified that within six months time part of his constituency would benefit from separating storm water lines from sewage lines..

December 11, 2014:  Basavanagudi MLA LA Ravi Subramanya questioned the education minister about the safety concerns in schools during assembly. Kimmane Ratnakar announced that 4 CCTV cameras would be placed inside the campuses of at least 3000 SSLC and PUC schools.

December 14, 2015: The MLA expressed doubts about the process adopted by BDA in allotting plots in the newly formed Nadaprabhu Kempegowda Layout. He feared the bureaucratic and manual style of working without the help of technology to provide transparency. The cool attitude could cause hurdles for eager residents.

November 30, 2015 He did not support the proposed increase in guidance value of properties in certain localities, especially Basavanagudi. The MLA said he found the spike in guidance value to be irrational, resulting in a bad real-estate market.

December 20, 2015:  The Basavanagudi MLA hit back at the BDA for the messy procedure of site allotment  in the Kempegowda layout, while operating like a private firm. He wrote to the Home Minister, K J George, asking his intervention in checking irregularities.

March 2, 2016: The MLA has sent a proposal to BBMP to build a parking lot behind Netkallappa circle to make Gandhi Bazaar a traffic-free zone. However, he feels that the local body is not interested in taking up the work.

November 30, 2016 Despite the ill-effects of demonetization, the MLA present at the annual groundnut fair on Bull Temple Road said that each trader made a conservative sum of Rs 10 ,000 each.

March 21, 2018:  The Basavanagudi corporator B S Satyanarayana is hoping to contest for the MLA’s post, but the BJP is still going to back the incumbent MLA Ravisubrahmanya.

March 22, 2018: Ravi Subramanya gave Rs 20 lakh from his fund towards constructing a new school building in the school Rajinikanth studied.

How did the MLA spend his LAD funds?

Every year, an MLA is given Rs 2 crores, to spend on developmental works in his constituency. He should allocate the funds for government, community, law, order and health infrastructure

Ravi Subrahmanya spent Rs 8.93 crore out of the funds allocated to him in the past three years. He has completed 85 activities.

His maximum expenditure was for educational constructions, for which he allocated Rs 1.6 crore. Some of the activities described, which are related to an anganwadi and a school etc seem rather mystifying, with an allocation of Rs 15 lakh “To buy furniture, computer, camera, projector, projector screen, smart board” to a primary school. Other educational construction activities got different kinds of allocations, from Rs 10 lakh to Rs 20 lakh.

Footpath railings, which are listed in three rows, were allocated Rs 86.06 lakh. The spending for each set of railings appears to be rather disproportionate, with grants of Rs 20 lakh, Rs 24 lakh and Rs 42 lakh.

Some of the grants for park development also appear odd. For instance, “Ward-156 Srinagar, 50 Routers of RCC Rooftop, Underground Route Drainage, Pedestrian Road Construction. (Survival work)” got a rather disproportionate allocation of Rs 36 lakh. Another allocation of Rs 14 lakh has been made for “The repair work of the damaged part of the proposed concrete road drainage pipe.” There are various borewells that have been drilled at different rates, from Rs 10 lakh to Rs 25 lakh. 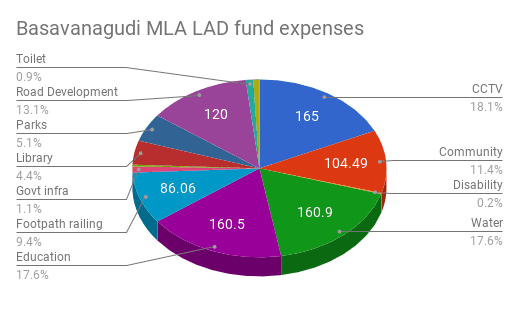 Independently running for the low-income citizens

A vegetable loader, a contractor-turned dalit activist, a former electrician – all hope to disrupt mainline party candidates who are making a bee line for votes from Bengaluru’s poor.