The people of Basapura, a growing neighbourhood in Electronic City, face a serious health hazard as tons of mixed waste including plastic are burnt every day, right in the heart of a residential area. 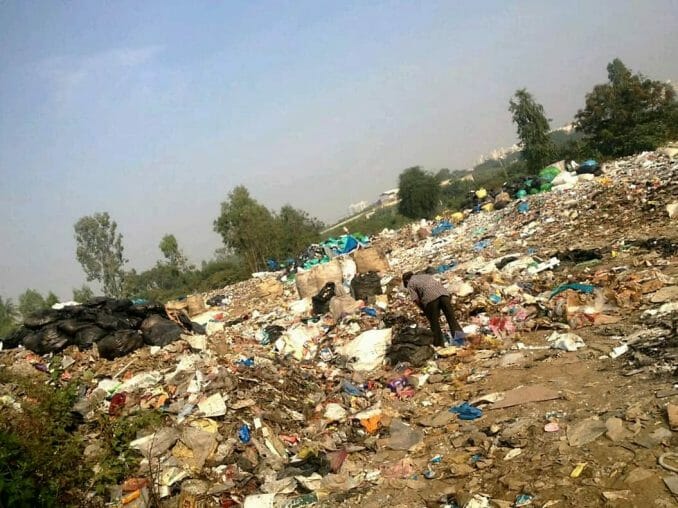 The garbage dump that is set to fire everyday. Photo courtesy: Basapura residents

At the root of this is an open area surrounded by many apartment complexes & major offices which has been converted into a dumping yard. The piles of garbage deposited here are set to fire everyday, creating thick smoke. The fire is usually seen in the wee hours of dawn and again in the evening around 5 pm, but the smoke fills the surrounding areas throughout the day. 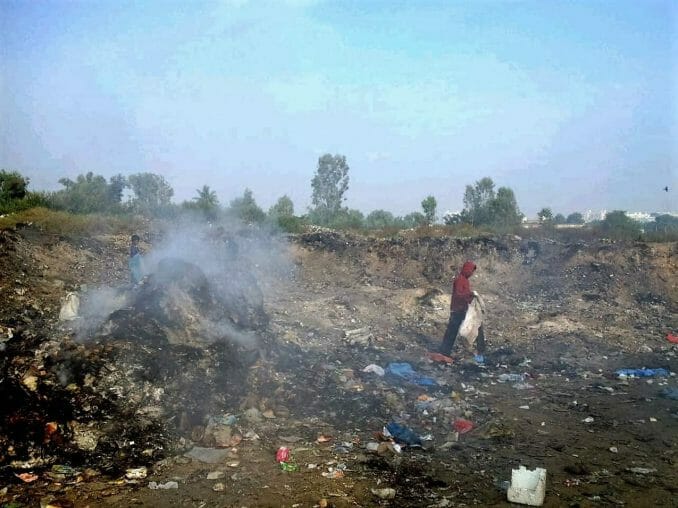 Residents in the neighbouring apartments complain of persistent cough and breathing problems. The dense smoke also causes low visibility, raising the risk of accidents on Nice Road which runs right next to this dumping yard.

Worst hit by this smoke and poisonous air have been the kids who can’t play outside anymore and keep coughing inside their houses as well. As parents, we are helpless and many of us have resorted to wearing masks even inside our homes.
When the fire burns and the smoke becomes unbearable, especially at night, we have often notified the fire station. In most instances, the fire brigade cited its inability to reach the site, till October 24th when the residents themselves guided the engine. The fire was temporarily put out then. 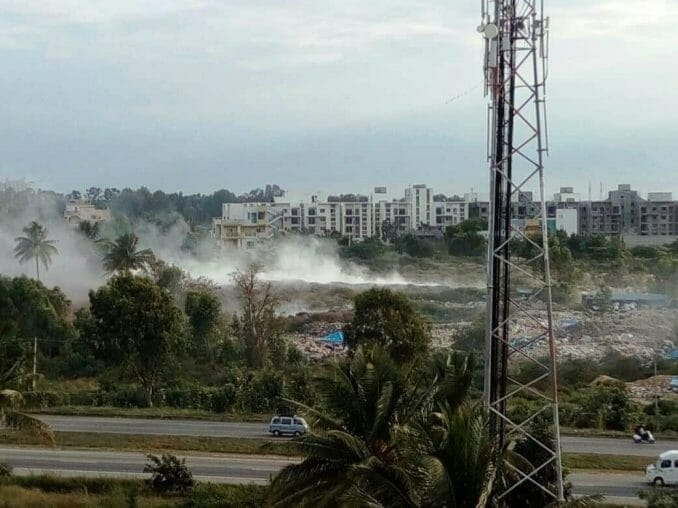 Continuous smoke emission from the burning garbage is leading to serious health issues for residents in the area. Photo courtesy: Basapura residents

On a number of occasions, residents have dialled 100 to lodge police complaints, and on October 23rd they filed a written petition, addressed to the Officer In Charge, Electronic City Police Station. The authorities have promised action, failing which an FIR will be filed against the unknown persons dumping waste in that land.
Citizens affected by the menace are now deciding on the next steps that will enable them to take their fight against the garbage mafia to a higher forum, which will hopefully bring them some respite from the constant threat to their health and well being.
About Gaurav Behere 1 Article
The author has not yet added any personal or biographical info to her or his author profile.

Residents of Chikkanagamangala, near Electronic City, say the project proponent lacks sufficient experience to run such a plant, and that the plant could lead to dangerous levels of pollution in the area.

Celebrate every day as Earth Day

Though Earth Day is celebrated once a year, is one day enough to be conscious of our impact on our planet? To truly make a difference, there needs to be a sustained effort!

BMRC to acquire church land for Metro, Tree Officer says not yet

The heritage All Saints Church is set to lose over 100 hundred trees and other structures to land acquisition for Metro rail. While BMRC announced that it will go ahead with the acquisition despite public protests, BBMP Tree Officer asserts that a decision can be taken only after an inspection report on tree felling, and public consultations