The first part of the series LOANS FOR URBAN POOR IN BENGALURU explained how the urban poor living in the slums of Bengaluru get trapped in the circle of borrowing, paying interest and re-borrowing. In this part, the author explores the reason behind the same—why banks do not help the poor—how complicated the process is.

Sunil, a slum dweller in Swatantrapalya, wants to buy an auto. He needs a loan badly. Not keen on lending money from local moneylenders for extra interest, he wants to secure a bank loan.

However, he doesn’t have any collateral security to offer to the bank. He hasn’t been able to convince the bank about giving him a loan, and is still waiting for his luck to turn around. This is the situation with most other slum dwellers, who ultimately are forced to buy from high interest lenders, hence get trapped in the circle of repayment and new loans.

Though the urban poor hardly get bank loans, they are actually supposed to get them, according to the Reserve Bank of India (RBI). RBI guidelines say that 40% of every bank’s lending should be to the priority sector which includes Medium, Small and Micro Enterprises (MSMEs), agriculture, weaker sections like SC/ST, women etc, to achieve financial inclusion.

K Ganesha, Deputy General Manager at Rural Planning and Credit Department in RBI, says that most banks do achieve the target. He says, “Some new private sector banks may not reach 40%, but all banks do achieve above 35%.”

However, RBI can only suggest to—rather than instruct—banks to achieve the target. Because, “bank managers are accountable to depositors, and hence have the discretion to decide on loans,” says Ganesh. 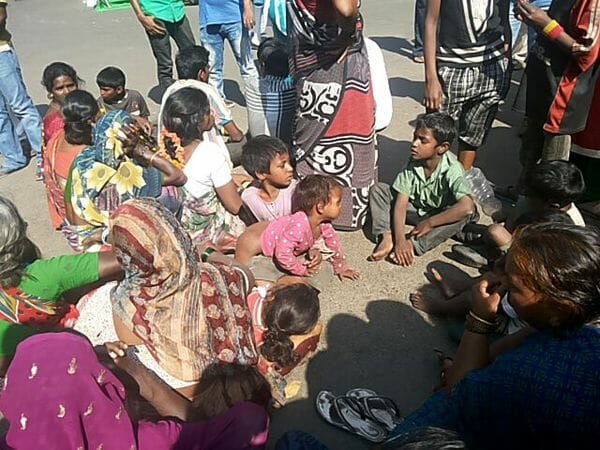 Opening Janadhan accounts for poor does not help banks, as the transaction that takes place in these accounts is less. Pic: Shree D N

All banks in India have to meet the target at the national level, so individual branches are advised to meet the target. But data on the 200 bank branches in Bengaluru Urban district that are outside BBMP limits, shows that many banks did not meet the 40% target in 2014-15.

(The data for the 1,800 bank branches within BBMP limits have never even been collected. This is because, it was only in 2013-14 that RBI included metros under its Lead Bank System (LBS). LBS is meant to extend banking services to the under-served. One bank is appointed Lead Bank in each district, which co-ordinates and collects data of all bank branches in the district.)

Though many individual branches in Bangalore Urban have not met the priority sector target last year, banks generally meet the target at national level. Because, if they don’t, they will have to bridge the gap by lending to National Bank for Agriculture and Rural Development (NABARD). NABARD will use it to finance government projects like road construction in rural areas. The annual interest paid by NABARD is much lesser than the interest rate of 10% or more, that banks can levy if they lend to individuals under priority sector.

Poor don’t get it. Who gets it then?

But if banks are lending under priority sector and if the poor still don’t get it, then who actually benefits from these loans? K S Gurudath, Lead Bank Manager for Bengaluru Urban district, says that most priority sector loans go to the middle class, and only some to the lower middle class. Gurudath is also Divisional Manager at Canara Bank in Bengaluru.

In Bengaluru, priority sector loans are given mainly for MSMEs in both industry and service sectors—these include taxi services, beauty parlours and home-based units. Industries are considered MSME if their original investment in plant and machinery—excluding land—is within Rs 10 crore; for service sector, investment limit is Rs 5 crore. Loan is given based on project report and other documents. For MSME loans up to Rs 10 lakh, no collateral is needed.

For the poor in Bengaluru, who often don’t have any savings, such investments are unthinkable.

Gurudath says that when banks do lend to MSMEs, they prefer relatively bigger industries. “Also, banks cannot lend to those who are not confident about their venture. When we question the person, he should be able to clearly mention his business plan, equipments required etc,” he says.

B I Hosamath, Senior Manager for LBS, says that requirements like BBMP clearance and licenses also come in the way of lending to very small industries.

It is not that banks maintain a category called priority sector and issue loans under it. Hosamath says, “Banks only categorise loans of certain amounts as priority sector, at the time of reporting data. While lending, they consider eligibility and criteria only, and not whether the loan comes under priority sector.”

Banks also try to meet priority sector target by lending to Micro Finance Institutions (MFIs), who in turn lend to the poor. MFIs come under a category called micro-credit, which includes direct loans to the poor and SHGs too. However, lending to MFIs is an easier option for banks due to lower risk and follow-up costs.

Loan under government schemes not helping

A 2011 study by Bengaluru-based non-profit CIVIC on the implementation of a major central government scheme Swarna Jayanti Shahari Rozgar Yojana (SJSRY) found banks to be apathetic towards the scheme. The scheme, now called NULM (National Urban Livelihood Mission), aimed to facilitate gainful employment to urban poor. The study says that banks often did not respond at all to individual loan applications. When rarely loans were sanctioned, applicants were asked to provide surety against loan, contrary to the scheme’s provisions.

Also, before sanctioning loans for shops, banks often asked for rental agreement of the shop, though the scheme was for those who just wanted to start one. To get such rental agreement, the poor would have to pay at least 10 months’ advance, which they could not afford. Thus only established businesses were getting loans. All these were despite RBI guidelines that loans under such schemes should be cleared transparently and within time limit, bank staff should contact beneficiaries to advise them etc.

Thus, in effect, priority sector loans hardly reach the poor. Despite repeated emails by Citizen Matters, RBI’s Bengaluru Regional Director did not respond on the issue.

Bank loans: not meant for the poor?

Gurudath says that the beneficiaries of government schemes mostly don’t use loans for the intended purpose. “Banks do individual appraisals before giving these loans, but the person will use only a part of the loan for investment. Finally he is unable to pay interest and banks often write off many loans.”

Gurudath adds that, education loans may be more accessible to the poor, as the requirement here is only admission to a reputed institution. Education loans up to Rs 4 lakh need no collateral. But the number of poor students who manage to enter reputed higher education institutions may be low.

Prof Sriram, a visiting faculty at Indian Institute of Management, Bengaluru, says that structurally the poor are designed to be left out of the banking system, as banks cannot determine either their ability or intent to repay loans. “The poor have no documents like salary slip with which banks can objectively assess their ability to pay. Intent also cannot be assessed as bankers don’t know them.”

From the perspective of the poor, banks are intimidating spaces. Very few of them even have a bank account. Those who have it do not do any transactions.

Ganesha says that banks are also not very keen on such customers. Because, “whether the deposit is Rs 10 or Rs 1 crore, the work required in processing it is the same. Under Jan Dhan scheme, for example, many accounts had to be opened and there is not enough manpower.”

According to Lead Bank office, the 2,000 bank branches in Bengaluru Urban have opened over one million Jan Dhan accounts so far; this translates to an average of 500 accounts per branch. What purpose these accounts serve, is another question. Shivamallu, 52, a street vendor in Koramangala, says that he uses his Jan Dhan account only to get gas cylinder subsidy. He does not make any deposits, and does not think it’ll get him any benefits.

Thus, government initiatives and banks hardly seem to benefit the poor, who are forced to remain dependent on ruthless money lenders.

But can the poor help themselves? Do Self Help Groups and MFI loans help tackle poverty? Coming up in Part 3.

Here’s why BBMP is unable to remove illegal hoardings

BBMP has no uniform policy for removal of hoardings. The terms and conditions are different each time, which is why the removal of illegal hoardings has become impossible. Here’s the story on the enforcement mafia.

Only 800 BMTC buses have bilingual destination boards, while the remaining 4000-odd regular buses have Kannada-only boards. It is the top political leadership that appears to be standing in the way.

From waste wise projects to dry waste centers, story of trash in Bengaluru

The concept of dry waste collection centers (DWCCs) is not new for Bengaluru. This article tracks the process of how it all started, and formalisation of DWCCs in Bengaluru, by the government.