The first part of this series looked at how Bengaluru expanded it self over the years, and how it has affected urban flood scenario in the city. This part explores how the surface water bodies have diminished and its effect on the flood scenario of Bengaluru city.

By now you would know that Majestic bus station was a lake once – Dharmambudhi lake. And that Bengaluru was a land of lakes once. What changed this, and why?

In a city like Bengaluru, lakes assume special importance. They provide lung space, groundwater recharge, biodiversity and recreational activities like boating and fishing. However the most important use from the context of this article is that they act as flood water mitigators. They receive rainwater through stormwater drains during the rainy season and help in keeping other areas dry.

Bengaluru district doesn’t have any live river currently. This is compensated by a number of lakes in the district. Lakes have a phenomenal significance. The entire ecological balance is maintained by nature on the basis of this factor. Hence any abnormality will prove disastrous for the entire ecosystem.

The urban development took a toll on the lakes in the city. Bangalore Gazetteer, 1981, notes that the district supports approximately 461 tanks that serve the irrigation need in the district. Most of the tanks in the district are seasonal and carry water for about six months in a year. Together, these tanks account for 54% of the total water resources of the district. They create a surface water potential of is around 12,541 hectares in the district.

Satellite data collected by BMRDA in 2001 reveals that there are 2,789 lakes in the city, which are in different stages of decay. Their sizes varied from 2 hectares to 50 hectares and covered an area of 18260.48 hectares with water.

With time, the lake areas have been transformed into residential and commercial entities, educational institutes, bus stands, stadium etc. Some lakes are now being used as dumping grounds for domestic and industrial wastes or open sewage. Here is a list of lakes which have completely lost their existence. (Source: Lake Development Authority Report: BBMP) 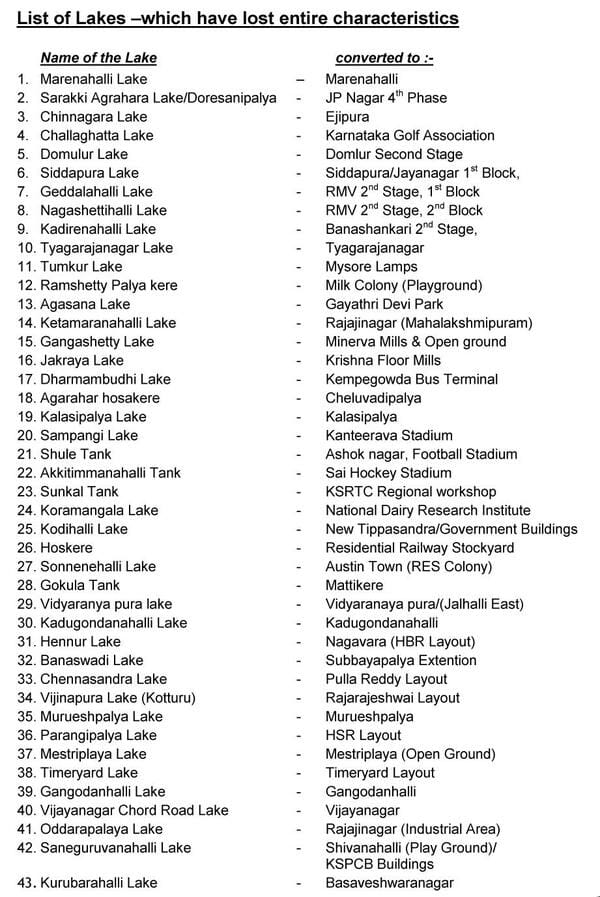 Though there are differences in the numbers and extents of the tanks/lakes, all the studies on lakes accept the fact that there is a sharp decline in the number of lakes and the extent of lakes in the city. All the researches in this regard attribute this decline to the rapid urbanisation.

Studies also show that nearly 66% of lakes are sewage-fed, 14% surrounded by slums and 72% showed a loss of the catchment area. Also lake catchments were used as dumping yards for municipal solid waste, construction residue or building debris. Building debris and construction residue are being thrown into the storm water drains by the construction people working near the drain. This results in the blockage of the drains making the drains overflow during rainy seasons, which induces waterlogging in surrounding areas.

To give a visual evidence to the fact that extents of the lakes in the city are diminishing, satellite images from Landsat satellite (satellite launched by NASA for Remote Sensing purpose), were studied by this researcher, for the years 1992, 2002 and 2012. The study names Normalised Differential Water Index (NDWI), which primarily suppresses all other features and highlights surface water bodies was carried out. Below are the result of the study. 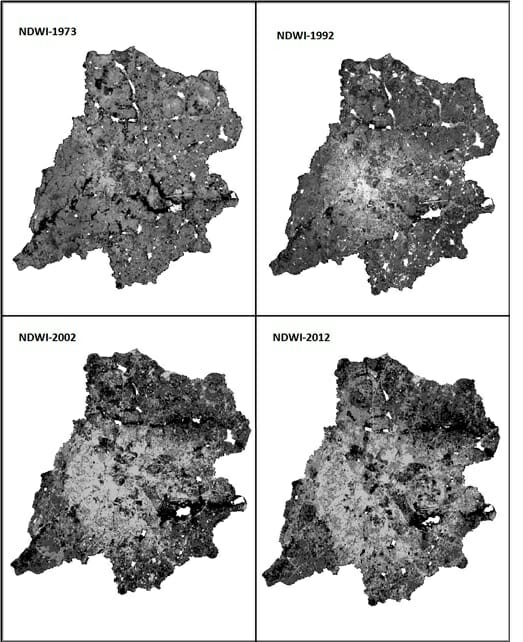 So the brightest portions in the images are the water bodies in the study area. To make the features clear, further processing was done to remove all features other than water. The result is given below. 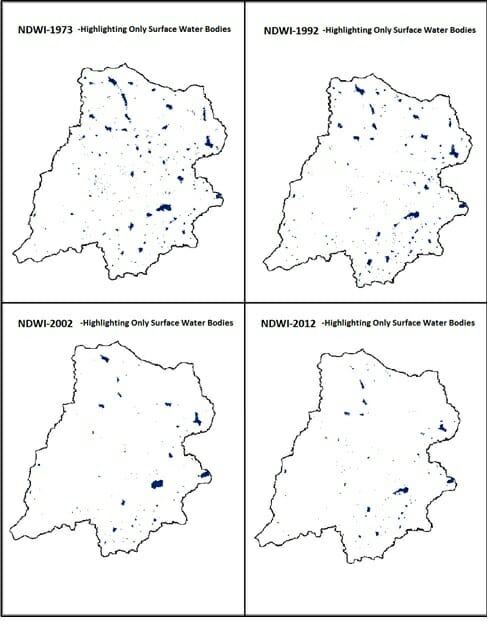 What can happen with reduced lake area?

Conversion of water bodies into urban settlements or the encroachments of the natural water bodies have resulted in the flooding. Natural drains for storm water and the natural water storage mechanism were breached. Many of the city administrators have concentrated on creating artificial lakes and ponds apart from maintaining the existing ones in good health to serve the water requirements of the city.

Bigger threats are posed by the encroachments of natural lakes. A lake naturally forms when there is a central depression and all the neighbouring areas are sloping down towards the lake. It’s a macro phenomenon. Just by closing the lake the natural slope towards the lake cannot be undone and this slope cannot be made out with naked eyes. Only a macro level survey can unveil this fact.

Such closure of the lakes will expose the new construction and surrounding areas that were not flood-prone, to floods. This is because the lake capacity has reduced vertically, so water will flow wherever there is low elevation.

There are also other negative effects that will haunt the city. They are:

All this only underlines an urgent need to restore and maintain the lakes in the city to make it liveable.

LDA has made some efforts to rejuvenate several lakes in the city along with detailed project reports. However, being the toothless body it is, LDA’s efforts have not been very useful in this regard. To read what the LDA does and its scope, click here.

Now, can imagine Majestic being re-converted to a lake? It has become such an integral part of the city’s commute, Dharmambudhi lake is lost forever. Though whatever development that happened so far cannot be undone, future developments can be planned well. However some relevant changes to the existing land use and the elevation profile in the areas which are already developed can help minimise the damages and losses during floods.

What changes? Let us explore them in the last part of the series. 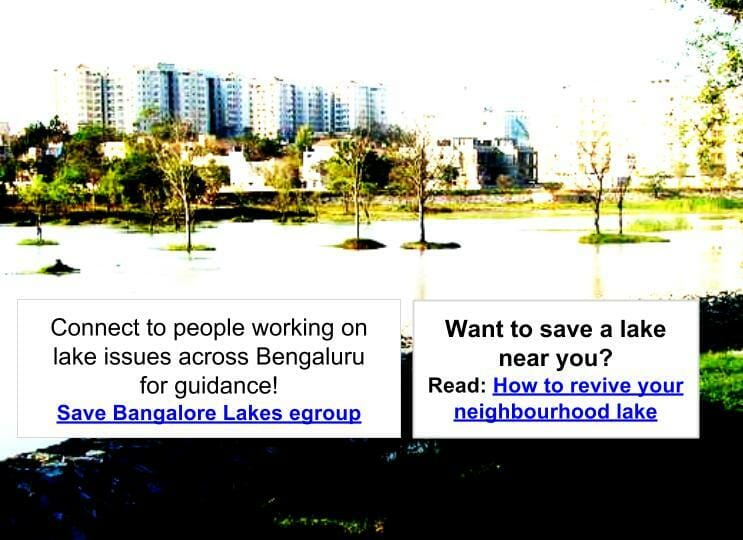 Here’s how Bengaluru is becoming increasingly flood-prone
Summer showers flood National Games Village
Why Bengaluru is not immune to floods: It’s all about land (and money)

About Dr Ajaya S Bharadwaja 5 Articles
The author has not yet added any personal or biographical info to her or his author profile.

BDA botches up the steel flyover issue by hiding information

The government not following the due process in the steel flyover issue has irked many public policy experts, while the Bengaluru Development Authority helped the controversy by hiding the information and refusing to share the data that was already in public domain.