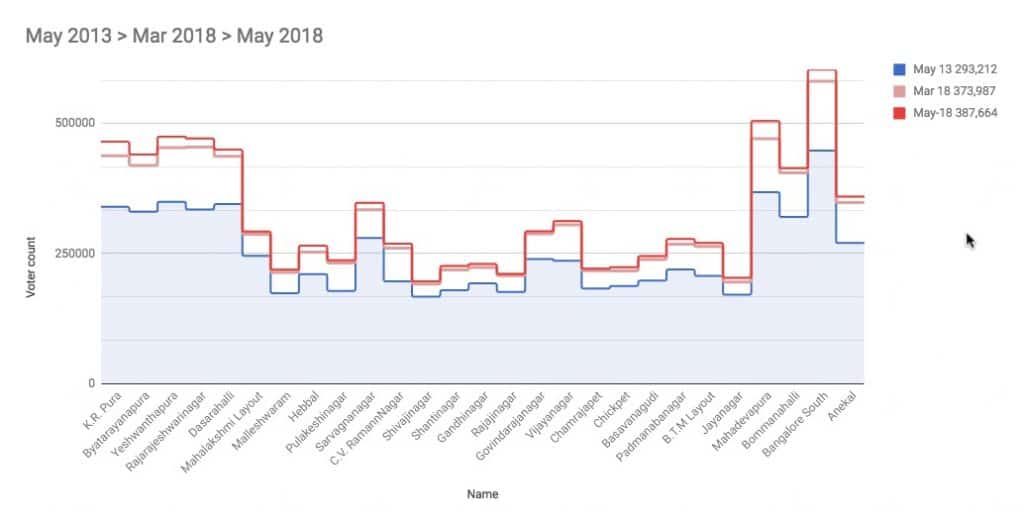 Commander PG Bhat, an expert in election-related data, who has been analysing the voter rolls for many years questions the accuracy of voter rolls:

Census india states that 41.1% of the population of India is below 18 years. To have 91 lakh voters, the population of Bangalore must be 1.55 crore, at least, if every eligible person has registered as a voter. Do we need a better proof that the voter lists bloated beyond belief?

Of course population of Bengaluru might have gone up in last seven years. The percentage of people who are single and in the city for earning their livelihoods might be more, so the question of having 41% population below 18 years may not arise here. Various websites take into account annual rate of increase in population and peg the population of Bengaluru between 1.23 crores and 1.24 crores. Even then, 91 lakh looks bloated.

Meanwhile, many voters who gave request to change their constituency during the special drives have got new voter cards, but their names continue to exist in the old constituency rolls as well. This just leads to doubts on the credibility of the voter roll numbers. This is important, because after the election, it will lead to a false analysis that concludes low voter turn out, as the base number on which it is calculated is inaccurate or bloated.

One apartment in Mahadevapura reported the presence of unknown persons in the same address where a few voters lived, and suspected that some of the entries might have been made by political parties to create fake voters. However, the Election Commission and BBMP officials ruled out any such issue.

Duplicate entries of same voters in a booth, across the booths and constituencies continue to haunt the voter list and affect its accuracy.

If you haven’t found your name yet in the new rolls, this link is where you can search for it.

Zameer Ahmed Khan is a three-term MLA from Chamarajpet. He was fielded in the constituency by former prime minister H D Deve Gowda after former chief minister S M Krishna vacated the seat when he

While one committee is conducting meetings seeking people’s opinion on restructuring BBMP, another committee silently conducted inquiries on irregularities in BBMP. The report was submitted in 15 days after the formation of the committee. What will be the outcome?

When Benniganahalli lake started frothing in 2017, residents of the nearby Pai Layout pushed BBMP to restore it. The cleaned-up lake bed is now filled by monsoon rains. The residents have also formed a Trust to develop a jogging track and other facilities here in coordination with BBMP