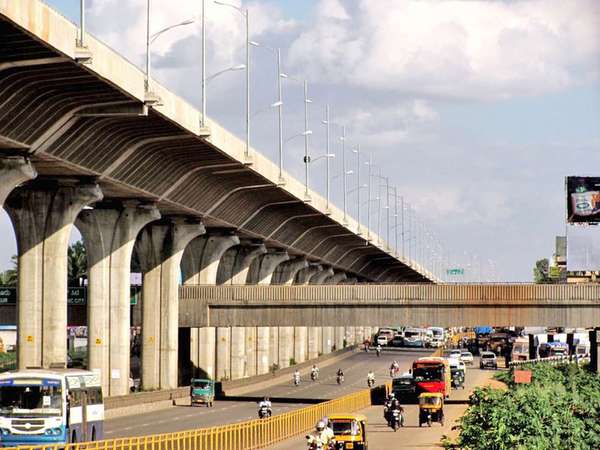 Work commute is taking a hit with traffic congestion on the roads increasing. Since the problem is on the road, the solution has been to increase it and remove perceived obstructions like signals, pedestrians etc from the line of sight of the car to increase speed.

One can draw an analogy to an obese person taking on too much comfort food because it feels good and now he/she needs bigger pants. He/she fails to notice that this is potentially fatal in the long run with illness and diseases in the medium term.

What are the implications?

The implications of this road capacity journey is dire. All capacity leads to a net addition to congestions, pollution and carbon footprint. The capacity addition is finite and we are crossing the limits every time. Microclimate changes including heat from motors and loss of green cover make the surface miserable for everyone, making them get into the comfort of closed air-conditioned places, thereby increasing the heat and polluting compounds transferred into the atmosphere. It a vicious cycle. Bengaluru is among the top two cities in the country affected by this.

Internalise this solution. Stand for supporting it in your daily interactions with other people, Sign the petition so we can tell this to the powers that be.

What are the potential solutions?

My city, Portland, Oregon in the United States, stopped building freeways over 40 years ago because they are the most expensive, damaging and least effective solution to the problems posed by growth. Portland’s focus on good transit along with inexpensive improvements for cyclists and pedestrians has worked to reduce pollution and traffic deaths as well as supporting a booming economy despite doubling in population during that time.

What are the incentives?

There is no incentive for long term thinking right now within the citizenry, business and political class. Most people end up trying to solve the pressing problem without realizing the long term impact. How do we get to deferred rewards which are more beneficial in the long run? Who is responsible for thinking about it and making everyone go towards it? Where is that leadership?

Politicians give in to pressure for immediate solutions to mitigate backlash and remain popular. Most medium and long term solutions like public transport, pedestrian and cyclist friendly streets have taken a back seat due to the need to fix road bandwidth issue. It has always been a catch up.

Why do a series of short term stop gaps end up getting done?

Because it does feel comfortable in larger pants for a while. You will get relief for a few years but Induced demand is a well proven concept in transportation. The more road capacity you build the more it attracts vehicles, new ones.  It has been shown that the added lanes get full in as little as 5 years. Is it worth building all that for just a 5 year relief? In fact even in the Mecca of cars, California’s Department of Transportation (aka Caltrans) has admitted to the futility of increasing lanes in a brief called “Increasing Highway Capacity Unlikely to Relieve Traffic Congestion,” compiled by UC-Davis scholar Susan Handy.2  US Transportation Secretary Anthony Foxx “…we now have the clarity of many decades of hindsight,” he said on a call today. “Unfortunately instead of connecting us to each other, highway planners separated us.”3

What does this lead to?

“India has tried stuff like bicycle lanes and BRT. All these projects have failed.”

I get it, but I just need the jam on my way to work to clear up now

Politics is in my blood: Lingaraj Urs, AAP candidate from K R Puram

May 2, 2018 Shravya Sharath and Gauri Mullerpatten

Inspired by grand uncle Devaraj Urs, he entered politics. Lingaraj Urs talks about his political journey and views, and tells that he is in politics for the long haul.

How to solve a problem in Bengaluru

A satiric note about solving Bengaluru’s problems that also highlights the causes of problems remaining as they are for ages.

Crackers or not, Diwali is celebrated by one and all irrespective of age, religion and region. Truly, a festival of lights!