In the first part of the series, the problems faced by the buyers of a famed developer who didn’t handover flats as promised, were explained. Read the first part here: When the developer conned buyers

This part will explain how buyers formed a community and tackle the issue.

When meeting in groups with the local management of the builder did not help, the residents decided to print banners and sit in protest at their office in June-July 2013. 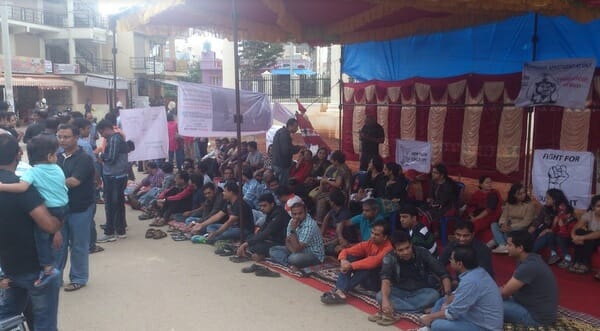 Buyers protest against the delay in completing the residential project. Pic: Soumya Nayak

Buyers Welfare Association (BWA) was registered soon after, under Karnataka Apartment Owners’ Act, in 2013. Now it would be a concerted effort. The first thing that BWA did, immediately after formation, was to send a legal notice on behalf of all buyers.

Discussions were initiated with lawyers on how to file a consumer complaint against the errant builder at the Karnataka State Consumer Forum. However, the lawyer advised against it and suggested filing the case after getting possession. Hence BWA decided not to file the case at that time.

However, Sundar and Nayak sought to form a group of interested individuals who were willing to immediately file a consumer case. The response was awesome! Around 150 people showed interest. However, in the end only 10 people actually went ahead and filed the case in 2014. But that was a good number to start.

Meanwhile, another protest by residents was planned in August 2014 on a huge scale, with tents, banners et al. This was the most successful of all initiatives which directly resulted in the builder handing over 10% of the apartments to the customers, within two months of the protest. It was a great moral victory for the buyers.

Here, all the residents got together and attended the protest in huge numbers. Those who could not make it personally, due to location and other constraints, helped in other ways such as funds, social media campaigns, protests at their own locations etc. Sundar, just with his family of three, would coordinate and protest on the same day, at his location in New Delhi, in front of the builder’s head office. It was so well-coordinated that media picked it up immediately and the builder was forced to listen to Sundar and promise resolution at the earliest, which still remains a promise!

BWA, on its part, started connecting with other RWA office bearers, became a member of Federation of Apartment Owners Association (FAOA), an umbrella group covering many RWAs in Delhi region, most of them aggrieved customers of the same builder, who had already filed numerous cases against the builder.

The three protagonists of this story then began studying and researching the case in their own small capacities, trying to identify alternate grievance redressal mechanisms under the ambit of law.

One of them had filed a case in May 2015, with Institute of Chartered Accountants of India (ICAI) against the auditing firm that was hands-in-glove with the builder. They used to extort money after showing their CA certificate to buyers and coaxing them to heed to all demands by the developer. As a result, disciplinary action was initiated against the auditing firm. Because of the ongoing disciplinary action, the auditor is not signing anymore certificates for this builder.

Buyers also approached Security Exchange Board of India (SEBI) along with ample evidence of malpractices by the builder, to fool buyers and investors, by falsely inflating profits. SEBI has set up a committee and is investigating this under the stringent “Financial Irregularities” clause, which is highly classified and the results of which may not be made public (however, suitable action would definitely be taken at the end of the enquiry). A case has been filed with MCA (Ministry of Corporate Affairs) which may result in cancellation of the builder’s license altogether.

A case has been filed with ‘Registrar of Societies’ against the fraudulent association formed and imposed on the buyers and the buyers being forced to transfer money to this third party in the name of various charges. Another case was filed with Central Commissioner of taxes against the various taxes being demanded by builder whereas none of it has been paid to the government.

Yet another protest that reached PMO

In the month of April 2015, BWA initiated another huge protest (indefinite till the demands were met) against the builder.

Buyers have become more and more aware, vigilant, informed and forthcoming in their fights against their respective builders.

The case at National Consumer Disputes Redressal Commission (NCDRC) is the largest in the history of India where 350 people have filed against a single entity. A whopping compensation of Rs 900 crores is being demanded from the developer, with residents having ample amount of evidence to indict the developer.

As the CA firm against whom disciplinary action was initiated doesn’t sign any more certificates for the developer, the developer managed to arrange for a CA in Bengaluru. But the new CA, on knowing the history, chose to retract. With no other option left, the developer is using the services of a ‘Chartered Engineer’ nowadays to do the work and issue certificates to buyers. This has been challenged at the Institute of Engineers. Soon the developer might lose the chartered engineer as well!

What next for the buyers?

While many of us are still waiting for our dream house, there is a ray of hope after the Real Estate Regulatory Authority (RERA) bill being passed by the Parliament. This bill is a harbinger of hope for all the clueless and helpless apartment buyers of India who fall for this huge scam, just because they decide to entrust their life’s savings onto a big brand builder in order to own a dream house of their own, perhaps, some day!

Behind the three ordinary citizens who are fighting this case, there are countless silent tears, infinite restless thoughts of hopelessness and desperation about losing one’s life’s savings and not being able to do anything about it, a rotten system forcing common men to bear the brunt of home loans and house rents at the same time, some retired citizens who have nothing left other than this hope for their own house, during their lifetime. The saddest part was when we realised one of our fellow buyers, a senior citizen who was a retired defense employee, expired recently while still awaiting possession of his flat.

Prayers and blessing from these people help the trio to keep going on from strength to strength in their fight against the builder. I am sure there will be many more musketeers waiting in the shadows to take up the fight. Now is the time for them to come out and show to the world – what the common man is capable of doing!

However, let me assure you that despite its various shortcomings, the Indian law is strong enough to nab criminal builders. It’s high time we stand up, get united and hit back hard – where it hurts them most!

Note: Name of the builder has been withheld in the story because the legal proceedings are in progress. Citizen Matters is in possession of the related documents for this story and has got legal inputs before publishing the story.

About Soumya Nayak 2 Articles
The author has not yet added any personal or biographical info to her or his author profile.

Road widening or not?

A Yelahanka apartment has court orders to not give up land for road widening, while some local residents demand widening. A group of people protested in front of the apartment on Monday, blocking its gates, with police support.

A gun in hand, your army on one side, your enemies on the other. You have to kill the enemies to survive. Do your planning. Prepare backup and shield. You have to work as a team or else, everybody will die and you will lose! It’s a do or die situation. Who will win the battle?