If you feel Bangalore has received good rains this year, here’s another news for you. Indian Meteorological Department (IMD) has predicted more rainfall for Bangalore in the coming months. This also means that there will be less power cuts and less drinking water problems, at least for this year, say experts.

Monsoon rain has been good in the city this year. From June 1 to August 31, 2013, Bangalore received 410 mm of rainfall. The actual rainfall for the south-west monsoon (SWM) season from June to September is a total of 549.6 mm. 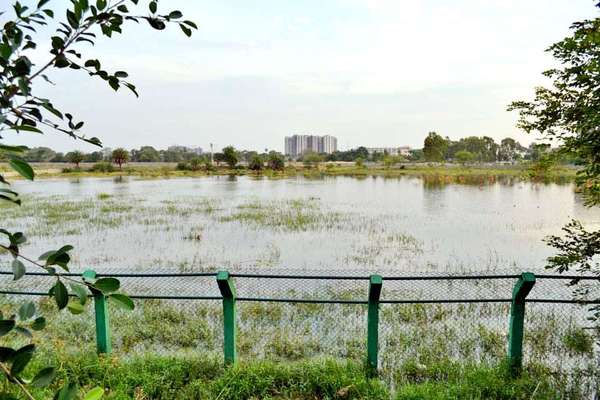 Rains have brought along smiles and hope to the people of Bangalore. File pic.

Explaining what is actual rainfall, Puttanna says that it is the cumulative average of the last years. Puttanna adda that Bangalore will not only receive good rainfall in September but also during North-East Monsoon (NEM) which is from October to December. This is because last year only 3-4 low pressure systems were formed in the Bay of Bengal and Arabian Sea during SWM, but this year around 13 low pressure systems have been formed so far, from June.

What is the reason for good rains this year? Chairman of Divecha Centre for Climate Change, Indian Institute of Science J Srinivasan says: “This year has been exceptionally good, but people should not think it is because of any climatic change. Changes in monsoon pattern is a natural annual phenomenon. It keeps happening.”

Prof Subramanyam, former water consultant to government of Karnataka, feels that it is not possible for the groundwater scenario to improve so soon, just in one year. “The levels have reached very low and the damages are irreversible. It cannot be brought back at least in our lifetime,” he adds.

He says it is now very important to see how the government will save the water and utilise it to the optimum and plan for the future. However looking at the present situation, people can breathe a sigh of relief till February- March. However, April and May could be a little problematic again.

Power situation – will there be improvement?

More than 30% of power in the state is produced from hydroelectric power plants. Will the rains improve power situation in the state? Prof Subramanyam, retired professor from IIT Kanpur and former water consultant to government of Karnataka, says: “The hydropower scenario will improve as long there is water in the reservoirs. There should not be any problems till the next summer, unless there is failure of the unit.”

Dr Dilip Ahuja, professor at National Institute of Advanced Studies, says that it will not solve the problem completely as the energy which will be generated will be used to meeting the shortfall from other sources like thermal and gas. So it does not solve the problem, but only gives the government some time to think about next year’s power scenario and prepare in advance.

‘Rain water not harvested in city’

Arghyam Chief Executive Officer, Jayamala Subramaniam says: “While a good monsoon is definitely a good thing, it does not necessarily mean that it will resolve Bangalore’s water crisis. Rainwater harvesting has still not been implemented across the city in spite of it being made mandatory years ago.”

She adds that citizens must take responsibility by harvesting rainwater individually, and need to understand that they cannot continue to expect water supply at subsidised rates. The cost of bringing Cauvery water to Bangalore is much greater than what citizens are paying for it at the moment. In order for the BWSSB to ensure water supply to the entire city, it needs to recover that cost of bringing the water to the city in the first place. Bangalore has exhausted its two water sources – Arkavathy and Cauvery. Any further increase in supply can perhaps only come from RWH (rain water harvesting) and reuse of wastewater, she explains.

Pack your bags, to spend a great monsoon weekend!
Pollution in Bangalore less during monsoons, says KSPCB data
How to keep snakes away this monsoon, in Bangalore
Rains bring smiles to far-flung Samarpan’s residents