Data from BBMP shows that Bengaluru’s 198 wards have together contributed Rs 5430 crores as property tax over the last three years.

The tax collection by ward varies from one extreme – 282 crores in three years collected by Bellandur, to another – 69 lakhs collected in Chalavadipalya. Bellandur which occupies 3.6% of the area covered by Bruhat Bengaluru Mahanagara Palike (BBMP) has collected Rs 103 crores out of Rs 1926 crores, that is more than 5% of the total collection. 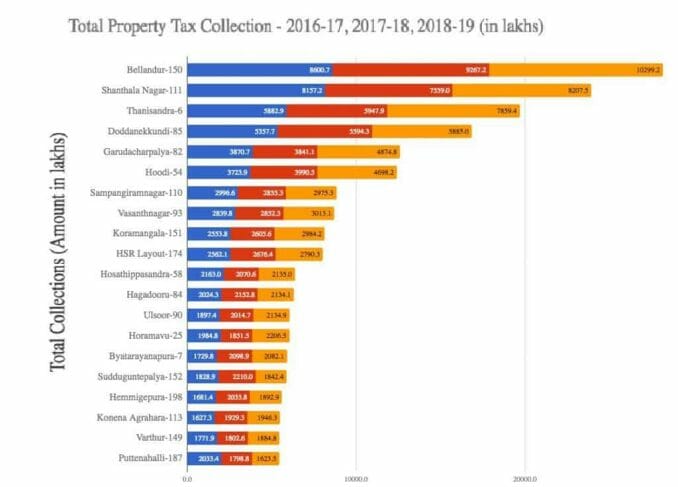 The top 34 wards have contributed almost 50% of the total tax collection in three years, which is about Rs 2729 crores.

Check the amount of property tax each ward has paid, in the below interactive map. Property Tax collections by ward (in lakhs)

These top wards are mostly from the newly developed peripheral areas, except for Shantala Nagar in the centre of the city. But if one were to look at the average annual tax paid per property in the three years, the older areas lead. This could be due to the high value of real estate in these areas. The average contribution of individual property is as follows, for top five wards: 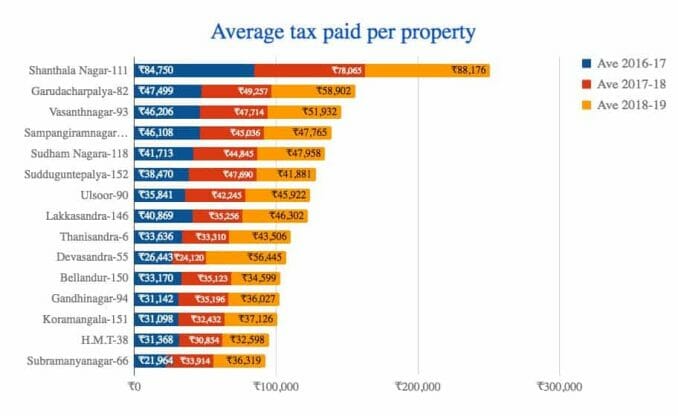 In these three years, the wards under Mahadevapura Assembly constituency (which also includes some rural areas) brought in Rs 887 crores, while the wards of BBMP zone Mahadevapura collected Rs 1072 crores.

The top two wards in terms of number of tax applications were Horamavu and Begur: 97,459 and 82,144 applications each, with Bellandur coming third with 82,081 applications.

How developed are these wards?

It is not surprising that the top contributors are from the periphery of Bengaluru, especially in eastern and south-eastern parts. They are among the largest in area. The recent spurt in growth here has led to way more properties, especially commercial buildings including corporate offices and tech parks, than older parts of the cities.

The top wards have many corporates and IT parks, as well as huge apartment complexes contributing to the city’s coffer. However the state of their infrastructure is dismal. Census 2011 data shows that Bellandur has just 74% piped sewerage and 57.9% tap water, compared to Shanthala Nagar which at second place has above 95% coverage for water and sewerage.

At the bottom end are Chalavadi Palya-Ward 138 (Chamrajpet Assembly constituency) which saw a tax collection of 69 lakhs. It is however a very small ward, with a population of 24801 people living in 0.4 sq km. The second lowest is Devarajeevanahalli-47 in Pulakeshi Nagar constituency, which contributed Rs 1.43 crores. This has one of the largest slums in Bengaluru, ie, DJ Halli. Former Mayor Sampath Raj is the corporator here.

To get more details about how much property tax your ward contributed, check http://opencity.in/data/bbmp-property-tax-collections-financial-year-2016-2019

How much are you spending on your child’s education? We are working on an interesting article, we would like to hear from you!