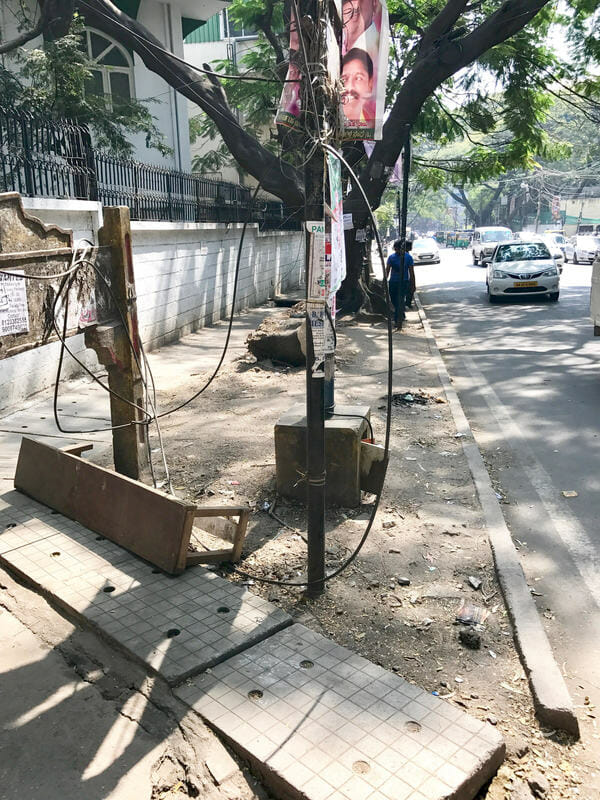 If you are a pedestrian you would know that crossing Bengaluru’s busy, lawless roads is nothing less than a life-threatening ordeal. For motorists, pedestrians are obstacles and for the traffic police, pedestrians are insignificant road users who somehow find their way in the mayhem of vehicles coming in from all directions without any order.

In a survey conducted by Walkability Asia in seven Indian cities, Bengaluru scored the lowest in walkability. It is common to see bikes using the pavements to ride past static traffic, or autos cutting corners inches from pedestrians walking or crossing. Often, rash and unempathetic motorists are seen honking right in the face of a scared pedestrian, who is already confused about where and when to cross and which vehicle to dodge. Pedestrian rights is a forgotten concept in Bengaluru’s world of traffic regulations.  Once considered ‘king of the road’, he is now reduced to a vulnerable road user who has more than often been a victim in road accidents.

However, there are laws spelled out to protect pedestrian rights. The Indian Penal Code protects pedestrians against negligent motorists. The Motor Vehicles Act prevents motorists from using pavements to drive or park vehicles. The Rules of the Road Regulations Act (1989) emphasizes the pedestrian’s right of way in more ways than one: 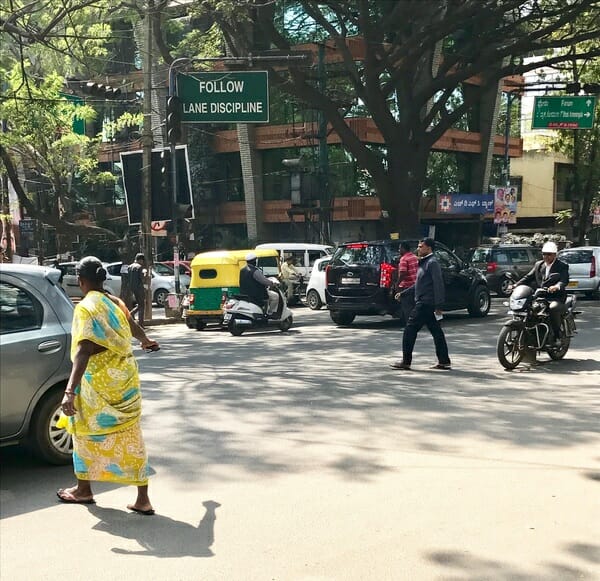 These are just a few of the many accidents that have claimed the lives of people who were simply using the roads on foot. It is disheartening that motorists don’t seem to care and the government bodies are not acting fast or doing enough to protect them.

The need to widen roads for a steadily increasing number of vehicles has resulted in encroachment of the zone meant exclusively for pedestrians – footpaths. Footpaths, zebra crossings and signal lights are designed for the safety and ease of pedestrians. Unfortunately, all of these are nearly non-existent and rarely an area of focus for government authorities, a fact that reflects their lack of concern for pedestrian safety.

Footpaths are as hazardous as the motorists on the roads – broken bricks and slabs, rubble, wide open gaps and poorly installed street lights with cables hanging loose. Restaurants and cafes occupy a significant share of footpaths illegally for business purposes with no one to question them. While the BBMP fails to address these issues, other government and private organizations dig up the roadsides and footpaths for their purposes and leave it in a condition worse than before.

Zebra crossings are of little or no meaning to motorists racing through traffic. Vehicles halt on the stripes leaving no room for pedestrians to make a safe crossing. Most zoom through the zebra crossings, violating rules and endangering the lives of pedestrians. In many areas, zebra crossings have faded to invisibility and the authorities seem lethargic to repaint them.

Pedestrian signals are yet another essential that the Bengaluru Traffic Department has ignored. A pedestrian signal replaces the necessity of traffic police and surveillance cameras can help nab offenders. In 2014, the traffic police installed 170 surveillance cameras across the city which helped them book 3 lakh motorists for parking on zebra crossings in just six months. So why hasn’t the traffic department considered this as a viable option and set it up across the city?

Instead, the BDA, BBMP and Traffic Department offer an inconvenient and expensive alternative – skywalks. 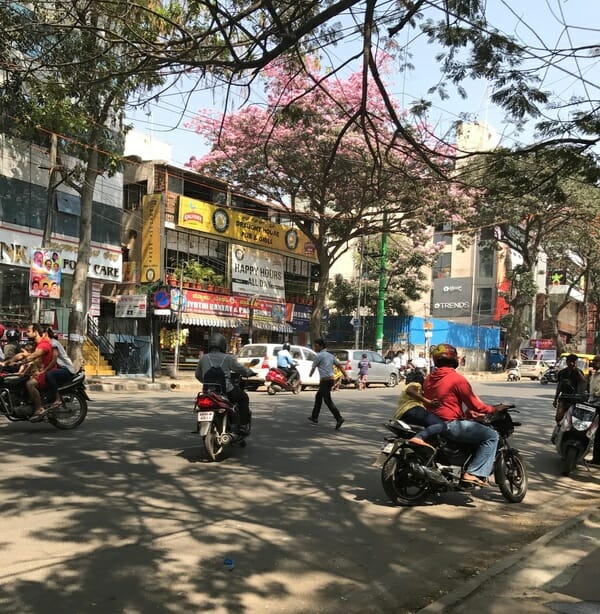 Will the bike hit the pedestrian? Pic: Nadia Asif

Skywalks not for pedestrians

Skywalks have been a point of debate and haven’t really been welcomed by pedestrians. The BDA and BBMP have built quite a few skywalks across the city and have many in plans. But whom are these skywalks benefitting? Instead of helping pedestrians cross a busy road and build better footpaths, authorities have forced them with the additional task of walking the extra distance to reach these skywalks and then climbing up and down.

The time and effort required is a lot more than it would take for a traffic police or a pedestrian signal to halt the traffic for a few seconds and allow pedestrians to make a safe crossing. Skywalks seem to be more for uninterrupted traffic movement than for the convenience and safety of pedestrians.

How can we change reality?

Many activists and responsible citizens concerned about the safety of people on the roads have spread awareness, demanded change, and voiced their concerns. It would be unfair to say that nothing has been done, but the BBMP, BDA and traffic department have been dragging their feet in this matter.

Social media has opened new doors. It is now easier for citizens to reach the departments, executives and commissioners with their problems or grievances on Twitter, Facebook and WhatsApp. To give credit where it is due, authorities do seem interested in looking into people’s concerns and solving them. This is your chance – take a photo of that broken footpath, post it on Twitter, and tag the BBMP commissioner or the Bengaluru Traffic Police. Make sure you are heard, for your voice may make it a better city for pedestrians one day!

Can my way be your right?
Not just a ‘pedestrian’ problem
Pedestrians too have rights
Where pedestrians have the right of way
It’s all dust, smoke and bad roads for pedestrians, while flyover takes shape

About Nadia Asif 2 Articles
The author has not yet added any personal or biographical info to her or his author profile.

A senior BMTC official and citizens accuse BBMP of serving advertisers to build bus shelters only in high-visibility areas. This, however, often does not align with commuters’ interests. The result: confusion and traffic jams.

How to manage sewage at zero cost: psst, the answer is biogas!

KSPCB introduces new norms for STP treatment – this is going to affect apartment STPs. Why incur a huge cost of this treatment, when there is a simpler, cheaper option, asks Dr Ananth Kodavasal.