Bangalore Literature Festival (BLF), the flagship literary event on the cultural calendar of Bangalore city, is all set for its second edition from September 27 to 29 at the Crowne Plaza, at Velankani Park in Electronics City. 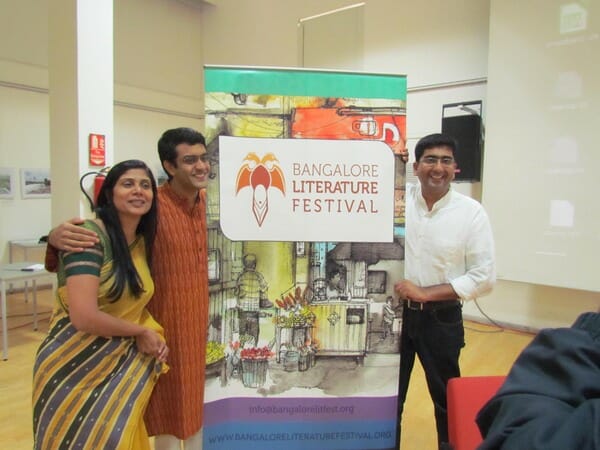 This year BLF will witness authors engaging the audiences with diverse themes. Highlights include commemorating 100 years of Indian cinema with adiscussion on the adaptation of biographies to bio-pics featuring one of India’smost critically acclaimed actorsFarhanAkhtar, director Rakeysh Omprakash Mehra and lyricist-writer Prasoon Joshi, whose ‘Bhaag Milkha Bhaag’ was a stellar success this year; discussions on cinema writing featuring veterans in the field like Baradwaj Rangan, Sidharth Bhatia, Sharmishta Gooptu, M K Raghavendra, Kishwar Desai, Bhawana Somaaya, Jayant Kaikiniand others. Poet Gulzar who wowed audiences at BLF 2012, andloved being there himself, will participate this year too in a discussion on film lyrics with Prasoon Joshi.

This second edition of the Fesival also has sessions planned on  Kannada literature featuring stalwarts like ChandrashekharaKambara, U R Ananthamurthy, HS Venkatesh Murthy, Nissar Ahmed, VenkatachalaShastry,  NarahalliBalasubrahmanya, VivekaRai, K S Bhagwan, JayantKaikini, Mamta Sagar, Giraddi Govindaraju, CN Ramachandran, MM Kalburgi, Padekal Vishnu Bhatt and several others speaking on a host of issues relevant to the language. Another unique and interesting element of BLF is the emphasis on oral literary languages of Karnataka including Beary, Tulu, Kodava and Konkani, as also a special panel on the village of Mathoor and its success with making Sanskrit all pervasive there.

Other key attractions that audiences can look forward to at BLF this year include a session on Spirituality and Writing by renowned Guru, Sri Sri Ravishankar; interesting presentations and lectures by eminent historians Ramachandra Guha and William Dalrymple; nuances of fashion writingwith Wendell Rodricksand much more.

This year’s edition of BLF also promises to be bigger and better for children and young adults too. In association with Pratham Books, Bookalore and Amar Chitra Katha, several children’s sessions and activity corners have been organised at the ‘MakkalaKoota’ tent at the event venue.

The Festival opens at 10am on the three days, with sessions going on through the day across three tents at the charming lawns ofCrowne Plaza at Velankani Park, Electronics City. Other interesting sidelights include an evening Carnatic violin performance by the Mysore Brothers – Dr. Manjunath and Shri Nagaraj; the famous Veeragase dance folk form of Karnataka, performance poetrysessions; Slam poetry workshops; a Hyde Park style Speakers’ Corner, short film screenings, stand-up comedy, book-nooks for literature lovers, a Festival bookshop by Oxford Bookstore along with several Kannada and Indian language book stalls to browse and buy books; book launches and author signing sessions; a unique spatial setup to explore and inhabit, film poster and memorabilia exhibitions,food and beverage outlets with street food, local and international cuisine – all making for a unique literary and cultural extravaganza and a true celebration of ‘Literature in the Park’.

Entry is free and open to all via registration on the website www.bangaloreliteraturefestival.org and via Facebook and Twitter on BlrLitFest. Pre-registration is highly recommended. Full list of events, schedule, participating author bios and other information will also be available on the website. True to its Bangalore roots, BLF will also take advantage of technology and all sessions will be streamed live through partnerships with AuthorTV and Radiowalla.

“Bangalore truly lives up to its cosmopolitan status and we have strived to reflect this in our programming of the Festival too. This year the focus is on being experimental yet inclusive with more languages, a blend of serious and light writing, intense and diverse themes coupled with celebrity attendance and general interest panels. We believe we’ve put together something for everyone and look forward to high levels of participation from namma Bengaluru,” said author and founding trustee of the Bangalore Literature Festival VikramSampath.

Advertisement hoardings: What BBMP Council wants vs what the state govt insists on

Last year, BBMP Council passed draft ‘bye-laws’ that ban ad hoardings in the city. But the state government recently framed its own ‘Rules’ that allow hoardings. How do these laws differ? Once either of these laws are approved, how would it affect the city?