Inclusiveness’ is the word for namma literary extravaganza, the Bangalore Literature Festival, to be held from September 27 to 29 this year at Jayamahal Palace. There are authors appealing to both the commoners and cognoscenti, English as well as bhasha readers, while technology is being used to democratise and promote.

Vikram Sampath, author, musician, archivist, team leader in an IT firm and one of the co-founders of the festival, points out that BLF’s inclusive, tech-savvy personality is reflective of the city. Here’s an interview with Vikram Sampath, where he reveals his plans for the literature festival. 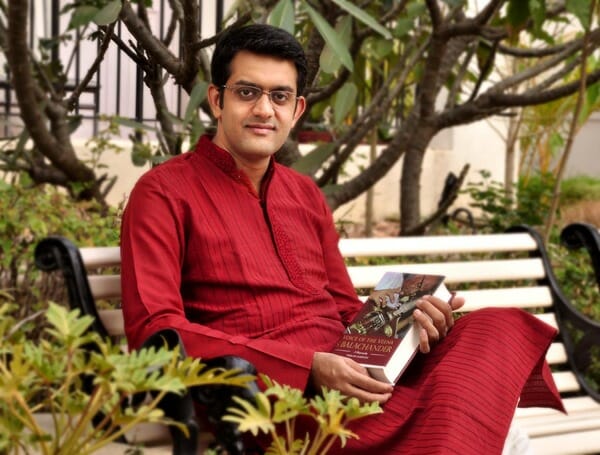 So September is the date of this year’s festival. What are the highlights?

Yes, September 27 to 29 will be the second edition of the Bangalore festival at the Jayamahal Palace. This time, we hope to have 120 authors participating. Apart from sessions in Kannada and English, we will showcase more Indian languages, certainly all the South Indian languages. We will also highlight one foreign language — we have chosen Germany this year and working with the Goethe Institute to bring several German authors to the city.

In collaboration with Himal, we are hosting a panel discussion on writing in South Asia. There are a few general interest panels too — themes outside hardcore literature. Politics and political writing and the ‘Hundred years of Indian cinema’ would be themes that would be given special focus this year.

We are also planning to introduce sessions for other languages and dialects from Karnataka, such as Tulu, Kodava, Beary, Konkani, Arebhaashe, some of which may not even have a script, but can yet boast of a lot of literature. There would be a feature on Mattur village, where Sanskrit is a vibrant, living language.

Parallel sessions are also planned. After the inauguration on Friday morning, we will organise sessions throughout Friday, Saturday and Sunday. Evenings will be marked with cultural events showcasing Karnataka. There will be several book stalls, a children’s reading corner, exhibitions around 100 years of cinema and sports memorabilia, coffee shops and a multi-cuisine food court.

Well! Quite ambitious, I must say. So what is the source of funding for all this?

We have a few committed sponsors and a few others in the pipeline. Like the proverbial big, fat, Indian wedding, things usually fall in place only in the last minute, but we are pretty confident of being able to pull it off. Several publishers have come in as sponsors too.

Did they find it viable for their kind of business to fund such a big affair?

Of course. Publishers and sponsors will find it a good platform to help their brands, directly. Last year, our bookstore sold over 15,000 books in just two days, which was a comforting thought even for an author like me. We will now look forward to having bigger and multiple stores.

The idea of Bangalore Literature Festival was conceived last year by four of us—Shinie Antony, Srikrishna Ramamoorthy, Anil Kumar and I. We had visited many literary festivals, and wondered why a city like Bangalore with such literary diversities could not have one of its own. Our endeavour was to bring literature to the doorsteps of people. Last year, we took authors to schools, conducted creative writing workshops and writing competitions.

The results astonished us! We drew 85 authors, and 8,000 to 9,000 people attended the three-day Festival at Jayamahal Palace. It seemed like a validation of all our efforts. This inspired us to scale the Festival up this year.

How do you rate the inclusive character of the last festival? In your desire to include everyone, you had Gulzar, Chetan Bhagat, Tavleen Singh… BLF did not seem to have the exclusive or elitist character of the Jaipur festival.

Bangalore is a blend of many streams. We wanted a festival that would reflect the cosmopolitanism of the city, and we did. At Jaipur, some celebrities get more attention, due to media. Yet there are some 200 other writers, apart from Salman Rushdie, who sadly go unnoticed. We are at least clear that we do not want to make BLF an exclusive elitist event, but one where everyone can partake.

And regarding Chetan Bhagat—well, he is a popular figure and widely read. Many people questioned us why we invited him. Some people posed tough questions to him on stage. A lit fest is no arbiter of what constitutes good literature because there are still a lot of people who read him, and who want to see and hear him live at a lit fest. So who are we to deny them that right?

(Laughs) I cannot comment on that! I am a host, it would be unfair to voice my personal opinions on someone who has kindly accepted my invitation and come to the Festival. Don’t forget that we also share the same publisher. At BLF we want to provide a platform for diverse writers and their opinions, and we did just that. Tolerance to different points of view is very important.

In the desire to be cosmopolitan, isn’t there a lot of chaos and confusion?

Of course not! Cosmopolitanism is in the DNA of Bangalore. A lit fest that goes in its name ought to reflect this naturally. I feel, every lit fest reflects the ethos of the city that it is held in. Inclusivity is our main focus. Reaching out to government and municipal schools through the outreach programmes last year is something that has been unique and not attempted by other lit fests.

Bangalore is also a place of socio-economic flashpoints. There is a transformation in the social structure of our city, for the worse in some ways, one could say. How does your fest reflect that change?

If issues get reflected in literature, they get reflected in the festival too. For instance this year we are planning panels related to writing on social ills related to women that would feature authors who have written extensively on a range of women’s issues, such as rape, female infanticide or representation of women in our religious texts. Another panel will be on writing from conflict zones, such as Kashmir, North East, Pakistan etc. Literature cannot be divorced from social realities. It has to and does reflect the voice of the common people.

You talked about the tech advantage of your festival last time.

Yes, with Bangalore being a technological hub, our festival too reflected that advantage. A lot of people could ‘attend’ virtually too, as many sessions got streamed through Radiowallah and through our social media partner Koan Metrics who provided live updates on a minute to minute basis. A number of people heard Gulzar and Pavan Varma directly through the online radio as they were stuck in traffic and could not reach on time.

We try to reach out to the younger audience through Twitter and Facebook. They come to attend, and stay for the sessions, and finally move on to reading. So it’s a gradual process of nurturing the reading habit and catching them young.

All these efforts are commendable, but don’t you think they should be continuous? Indians are not ‘reading’ people. In buses, stations or trains, you rarely see them reading books…

Yes, I agree that we don’t read as much as one is expected to. You will not find Indians reading in the manner in which, say, the Londoner would read in the Tube. But then, I think the public transport system is also so bad that it seldom facilitates such luxuries…

No, no, no, Mr Sampath. Let us not blame the public transport system for our lack of reading ability, much as you can blame it for practically every other thing!

(Laughs) Well, when hopping in and out of buses is a diurnal struggle, not to speak of being able to catch one at the right time, reading does seem distant.

Be that as it may, but there is a lot of effort that has to go into the fest being a continuing exercise all through the year. All of us organisers are busy people with parallel jobs. We initially wanted to have one such event every month, but it’s very tough to sustain though we do hope we can do that going forward. Last year, through Pratham Books, we tied up with schools and took authors to schools. They communicated with children directly. Like I mentioned, we should catch them young and encourage them to read, not when they have become old and set in their ways. You will find it more difficult to persuade a 40-year-old to read!

Are you hopeful about the market for books in future?

I am an optimist. There is surely a market for books – be it in the form of a physical book or an E-book or Audio book. If the current sales figures of some of the books are anything to go by, and also the plethora of writers springing up from everywhere, I don’t think we are going to lose touch with the art of reading/writing.

Of course, we could bemoan the kind of material that gets dished out as literature, but then that’s highly subjective and who is to judge what is good literature? I think Bangalore has always been a knowledge centre and reading has been an integral part of this ethos. We have some of the greatest names of Kannada and English literature in our city, including many Jnanpith winners. Regional literature has a vast reach and reading base; English is possibly just catching up.

Yes or no to plastic bags?

A school that set an example – 50 years ago

Radhika Raj Narayan treads down memory lane, reliving her 1960s school days, and believes that most of life’s lessons are imbibed from one’s schooling.

City think tank points out flaws in city planning bill. Top issues: Planning is not linked to budget; No public consultation in planning.