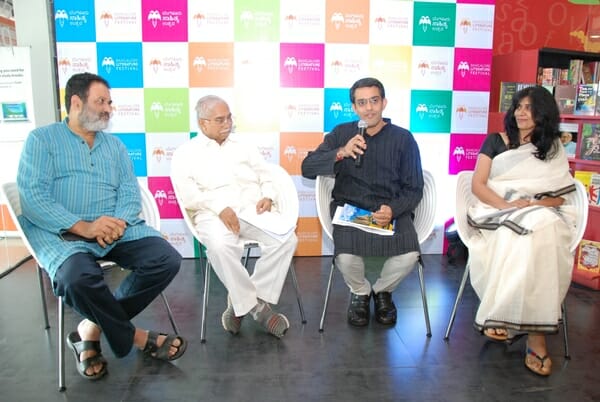 Bangalore Literature Festival (BLF), the flagship literary event on the cultural calendar of Bangalore city, is all set to roll out its third edition from 26th to 28th September, 2014 at the Crowne Plaza, Velankani Tech Park in Electronics City.

In its third edition, this renowned literary conclave which brings together hundreds of stalwarts from the world ofliterature and ardent book lovers, will have a special focus on the North-East. This edition is dedicated to the memory of the recently departed literary giant Prof. U R Ananthamurthy and will feature a tribute session by several writers who were his admirers and close friends.

The major focus and a recurring motif this season will be looking east and the North Eastern States of India. Other themes will include Women/Gender issues, LGBT rights, Travel Writing, Dalit Writing, Aboriginal writers from Australia, specific panels on Kannada literature, and many South Indian and Indian languages, media ethics, music writing, freedom of speech, children’s writing, humor, short stories, women’s writing, cinema, poetry, biographies and memoirs, sports, entrepreneurship and, last but not the least, love.

The special attraction will be the contingent of writers from the North East who will not only discuss the literature of their region but also the socio-political and cultural issues that confront them. Notable voices from there who will share their experiences with Bangaloreans are Mitra Phukan, Dhruba Hazarika, Temsula Ao, Tayenjam Bijoykumar Singh, Kynpham Sing Nongkynrih, Binalakshmi Nepram, Pradyot Manikya Deb Barman and others.

As the only literature festival that has structured sessions for children and young adults as part of the ‘Makkala Koota’, BLF continues to wow the younger ones in the audience with a story-telling and detective workshop, a Harry Potter Quiz and many fun-filled events. Two new components that have been added this year are the round-the-clock screening of documentary films related to literature and writers and a unique ‘Lit-Mart’ where wannabe authors can make crisp three minute pitches of their manuscripts to an array of literary agents, commissioning editors and publishers. Don’t forget to catch a copy of the “Beantown”, the literary magazine of BLF, at the festival.

Vikram Sampath, Author/historian and Co-Founder of Bangalore Literature Festival, says, “Over the last two years, BLF has made a distinctive mark not only in the city, but also the country as a festival that is serious about issues concerning literature. Each year we have attempted to bring something new to the fore and engage our spirited audience with panel discussions, workshops and cultural programmes. This year too, we are pleased to host an exciting lineup of established and emerging authors and speakers who will discuss diverse topics, with a special emphasis on the North East and South Indian languages. The idea is to make the festival a crucible for all thought related to South Indian languages and a must-visit event for India.”

Other interesting sidelights include a Hyde Park style Speakers’ Corner, stand-up comedy, book-nooks for literature lovers, a Festival bookshop by Oxford Bookstore along with several Kannada and Indian language book stalls to browse and buy books; book launches and author signing sessions; a unique and interactive literary installation at the venue, food and beverage outlets with street food, local and international cuisine – all making for a unique literary and cultural extravaganza and a true celebration of ‘Literature in the Park’.

As writer and co-founder of BLF Shinie Antony says, “The festival is a win-win situation for writers and readers. It cuts across all ages, genders, genres and languages.”

The Festival opens at 10am on the three days with sessions going on through the day across three tents at the charming lawns of Crowne Plaza @ Velankani Park, Electronics City. Entry is free and open to all via registration on the website www.bangaloreliteraturefestival.org and via Facebook and Twitter on #BlrLitFest. Pre-registration is highly recommended.

About The Bangalore Literature Festival (BLF):

A celebration of literature, this festival also seeks to commemorate the creative spirit of Bangalore and literary diversity of the city offers by engaging it in conversation with the best minds in the world of literature from both within and outside of India.

This initiative by a group of authors and bibliophiles of the city is led by authors Vikram Sampath and Shinie Antony and social venture professional Srikrishna Ramamoorthy. The objective of the Bangalore Literature Festival is to put together a literary experience that brings writers – both established and aspiring, readers, publishers, students and young professionals and other stakeholders of the city together on a common platform and create a compelling space for engaging and thought-provoking discussions on literature and life.

This is a press note issued by the organisers of Bangalore Literature Festival, and published as is on Citizen Matters in the section ‘Messgae Forward’ meant for public interest messages by institutions and individuals.

The air in these Bengaluru roads is often as bad as in Delhi or Beijing!