Several reports from across Bengaluru point to tenants — migrants, students, young professionals, flight attendants and others — being asked by house owners to vacate their accommodation without prior notice. With the 21-day nation-wide lockdown in force, some helpless tenants are in a state of trauma after being forced to vacate. The lockdown clearly means that no one should leave their homes.

According to a news report, an airline stewardess living in Kothanur was asked to vacate her apartment after her rent agreement expired on 28 March 2020. With all flight operation suspended and her monthly salary not credited, the young woman was using her savings to buys essential supplies to run her house. Many people like her are facing difficulties to find a new place to move into, due to the lockdown.

In another incident, a group of young sportspersons from the West Bengal and Meghalaya living in a rented apartment in Adugodi, were harassed by a neighbour when they were exercising on their terrace on the evening of 28 March. The neighbour called one of them “corona” and complained to the Adugodi police who, as it happened, forcefully took them to the police station late evening. The whole incident was recorded live on Facebook by one of the sportspersons. Worse, the landlord asked them to vacate the apartment the next morning. Even as they continue to stay there, they fear for their safety and are traumatised after the discriminatory treatment they were subjected to.

Their plea on social media to the police and other departments has not been noticed and acted on yet, although the city Police Commissioner Bhaskar Rao tweeted the next day. His tweet said:

Some misguided persons have made unwanted Covid 19 remarks against our brethren from NorthEastern States. These misguided will be dealt with very sternly. Brothers & Sisters from NorthEast, you are secure here, approach nearest Police Station or Me directly. Live Fearless.

On March 28, the Ministry of Housing Affairs put out an order with detailed measures to restrict the movement of migrants and strict enforcement of the lockdown.

What the Ministry of Housing Affairs says

The point 4 and 5 in the order by the Ministry of Housing Affairs states:

iv. Wherever workers, including migrants, are living in rented accommodation, the landlords of those properties shall not demand payment of rent for a period of one month.

v. If any landlord is forcing labourers and students to vacate their premises, they will be liable for action under the Act.

Given the extraordinary situation and measures to contain the spread of COVID-19, it is clear from the above order that landlords cannot force residents to vacate or demand rent considering that many people are facing financial difficulties.

The state government also followed suit. In an order dated 28 March, it directed departments to “take steps to ensure that other categories such as students, working women’s hostel inmates are also allowed to continue in their existing facilities with all precautions.’’ This clearly underlines that hostels need not close down either.

The state’s Commissioner for Health and Family Welfare, Pankaj Pandey, in a tweet said, “Attention! Landlords and House Owners. Forcing the Labourers to vacate house will lead to penal action against you. Help them when they need you the most!” 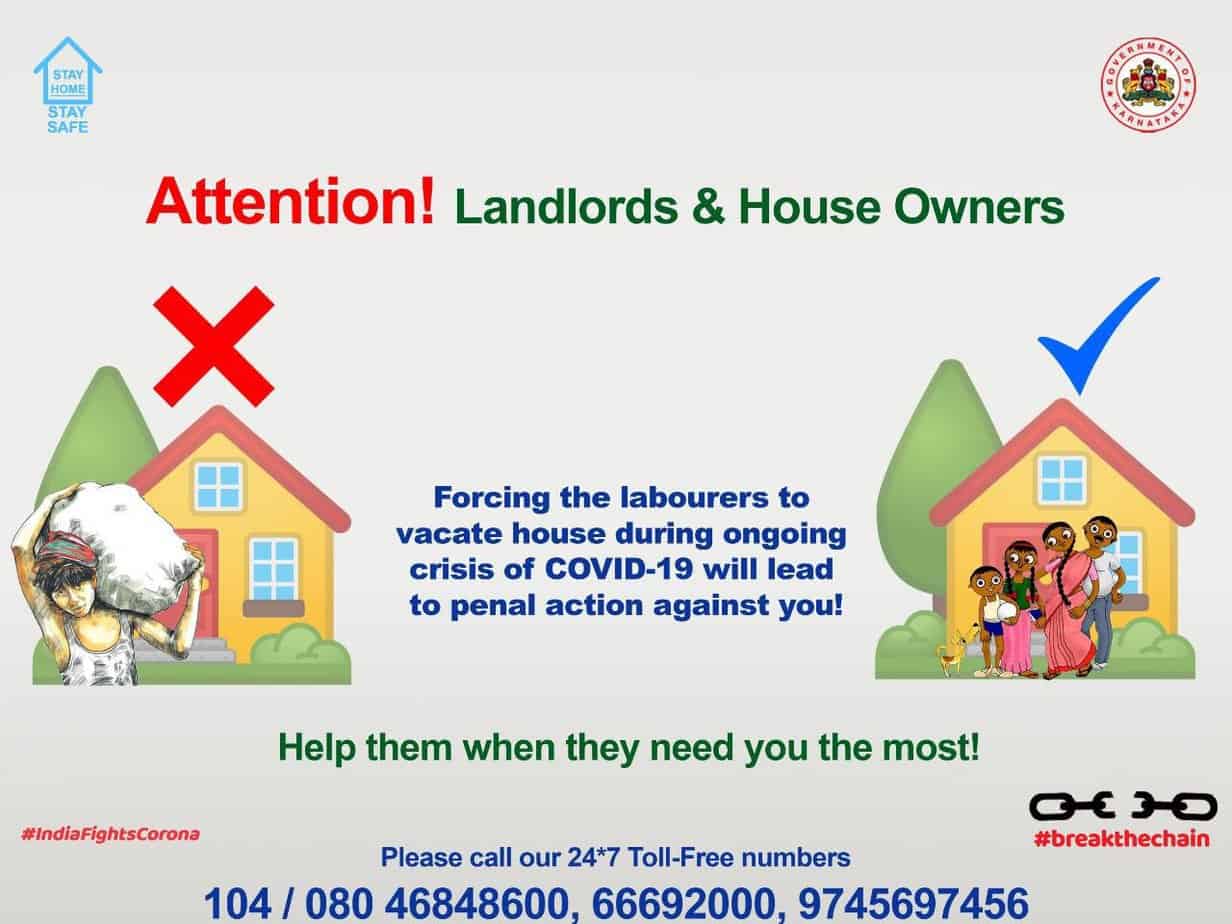 What to do if you are asked to vacate?

Talking to Citizen Matters, Bengaluru City Police Commissioner Bhaskar Rao said that strict instructions have been issued on social media and through written communication to PG owners and landlords to not harass tenants. “We anticipate more problems in the coming week as many will not have received their salaries and will be unable to pay their monthly rent,” he said.

Bhaskar Rao said that if any person is being asked vacate their rented accommodation, PG or hostel, they should approach the nearest police station or bring it to the attention of civic authorities such as the BBMP or a government department. Aggrieved persons should hand over a written complaint with details such as address, details of the landlord/PG owner, the issue and request support. On social media too, their complaints should specify their location in order to ensure quick follow-up action, he said. As there is no dedicated helpline for such complaints, those aggrieved should use the regular helplines, he added.

On Thursday, Bhaskar Rao tweeted, asking to know how paying guests are managing in their PGs. You can tweet @CPBlr and @BlrCityPolice with details.

About Ekta Sawant 12 Articles
Ekta is the Engagement Lead at Citizen Matters. She is interested in urban development, and understanding voluntary organisations and civic action groups in Bengaluru.
Twitter LinkedIn

BBMP accepts blame for garbage mess. But what next?

With a near universal acknowledgement of the need to segregate and process solid waste within the city, a meeting organised by a city organisation tried to look at the big picture.