The recent astronomical hike in tomato prices in the city weighed heavily on the household budgets of many Bengalureans.

Here’s a look at some reactions to this price shock:

“I usually go to the Yeshwanthpur city market to buy vegetables because it’s much cheaper to buy from there. I was buying ½ kg of tomato when the prices shot up instead of my usual purchase of 2-3 kgs per week. The prices of vegetables fluctuate so much. On the day the rate is cheaper, I buy in bulk and preserve the vegetables at home.”
– Housekeeping staff at a private company.

“I buy vegetables from a supermarket near my house. I didn’t change my consumption pattern because of this price hike. I usually don’t check the prices when I buy vegetables, especially of vegetables like tomatoes because it is a necessary part of my diet.”

The varying reactions to this food price shock present to us a city significantly stratified on the lines of income.

Food is an indicator of economic class

Food has always been a marker of diversity in social and cultural practices across the world. In a highly stratified society, it is also one of the most striking indicators of economic class.

A study conducted by the Indian Institute for Human Settlements on household food consumption practices in Bengaluru, highlights the extent of stratification in the city on the lines of income. On analysing food consumed by different income classes, we find that the poorest and richest groups in the city make significantly distinct choices about what they eat and where they buy their food from, given the myriad market options available.

Both groups have an equally high consumption of items like rice and milk. However, the richest groups consume more fruits and vegetables and processed foods like snacks, chocolates, and aerated drinks than the poorest group, possibly enabled by higher disposable incomes. On the other hand, the poorest groups consume lower amounts of fruits and vegetables and higher amounts of meat and cheaper local staples like ragi, jowar and bajra. 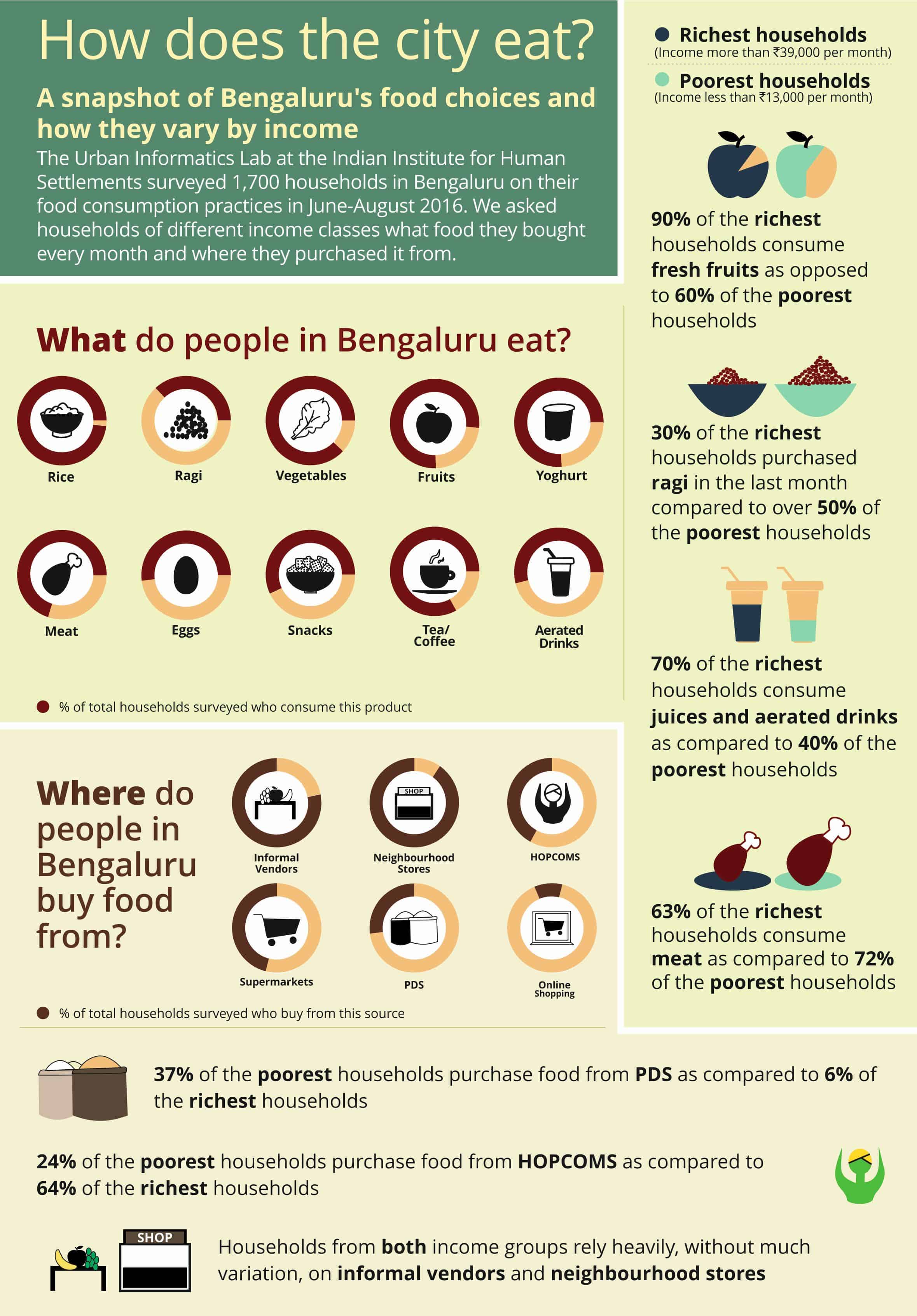 The case of local millets is of interest. The consumption of millets, like ragi, is known to have deep caste connotations in Karnataka. This is notwithstanding the recent resurgence of ragi and other local millets as nutritive ‘superfoods’ in the diets of a few in the city. This has driven the prices up. A fallout of these consumption patterns is nutrition and health-related concerns for both classes–issues of obesity and lifestyle diseases like diabetes in the richest classes and lower levels of nutrition in the poorest classes.

The differences between food practices of the richest and poorest groups is less pronounced when it comes to where they buy their food from. Very interestingly, a majority of our sample across both income classes, over 80%, reported buying food from neighbourhood or kirana stores and informal vendors on a frequent basis.

We find that the poorest groups buy food from the public distribution system (PDS) or ration shops more than the richest groups. The share of the richest group’s food purchases from supermarkets and online platforms is higher than the poorest group. The surge in online food and grocery delivery platforms catering to the richer segments in the city is an extension of this trend.

These patterns offer critical insights into the nature of access to a healthy diet and sufficient nutrition in a large city like Bengaluru where people are required to depend on market sources for their food unlike rural areas with high levels of food self-sufficiency. The poorest class is the most vulnerable to erratic events like food price fluctuations or other forms of volatility when it comes to food.

The issue however does not seem to be that of access to specific, “better” food sources but rather in the food choices people make given their incomes. The unequal access to food and nutrition is a matter of concern, with monthly budgets dictating the kind of food people choose to consume.

This piece has been authored by Jyothi Koduganti, Charrlotte Adelina and Apurva Kandicuppa, and was first published on Indian Institute of Human Settlement (IIHS) website – http://iihs.co.in/knowledge-gateway/how-does-the-city-eat/

For cars to fly over Agara and Iblur

Some questions, comments and suggestions on two grade separator projects at the Agara and Iblur junctions in south-east portion of Bengaluru’s Outer Ring Road, with some alternative traffic flow options.

When Phase I of COVID waned, BBMP ward-level committees should have been planning to meet the healthcare needs of the local area.