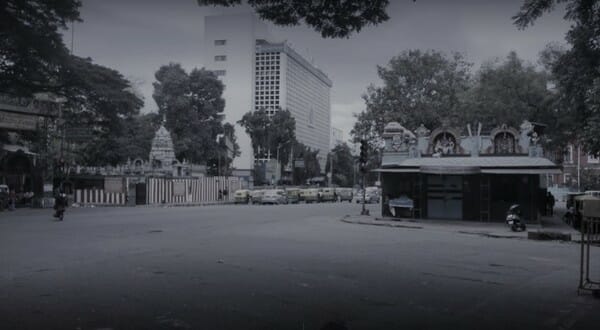 Mysore Bank at the Mysore Bank Circle is a thing of past – it’s going to be just State Bank henceforth! Pic: Malempati Ravi/ Google Local Guides

After 104 years, the name State Bank of Mysore was relegated to history. “Mysore Bank” which held a place of pride among Bengalureans no longer exists. There won’t be any boards dotting the city with the blue symbol.

And like with many establishments, the name will continue to live on in Bengaluru, hiding in plain sight among other spots of history – in the city’s bus stops and junctions. The latter cannot be guaranteed. All it would take is one famous personality dying, for the junction where Avenue Road meets KG Road to be renamed. But the City’s memory is longer and it is harder to erase bus stop names that pass on like memes from one generation of conductors to another with the commuters acting as conduits.

You take a bus from Market, go to “Makkala Koota”, then “Uma Talkies”, all existing landmarks, and then things start getting muddled. There’s “Bangalore High School”, which has moved to Jayanagar, vacating that building for Jnanodaya School, but continues to lend its name to the bus stop. Some call it Maratha’s Hostel, but BHS is more common. There is the “Ashrama” stop, the name coming from the Ramakrishna Math, and the bus can either take a left to “North Road” or move on to “Ganesh Bhavan”. North Road was what is now Vanivilas Road, and it is to the South of the centre of the city, and goes from East to West. It could also be derived from the Uttaradi Mutt Road, but the “Road” is just a stop. Ganesh Bhavan is now a small Darshini close to the stop. There was an eatery that lent its name to the stop and closed down a few decades back, until someone decided to open a Darshini nearby and found a famous name that was there for the taking.

After Ganesh Bhavan is the “Devasthana” stop, derived from the towering Kumaraswamy temple. Then comes “Nirmala Stores”, followed by “Apex Bank”. As a kid I remember looking for the shop called “Nirmala Stores” and not finding any. Wonder how long ago the shop closed. Given that these stops are on the old Rajnikanth route from Majestic to Srinagar, did he know and see the landmarks he was announcing as the bus drew up? Did he shop at Nirmala stores and have coffee at Ganesh Bhavan? As for Apex Bank, the branch of “Karnataka State Co-op Apex Bank Ltd” moved much further up the road decades ago. But that has not deterred people from a good bus stop name.

Single-hall theatres are common bus stop landmarks. They keep going out of business, but the bus stop names borrowed from them continue to thrive. Routinely traffic police announce traffic pileups at Sujatha.  Where did that theatre go? Where is Central Talkies, while buses still announce Central Talkies? Prasanna-Pramod stood for decades next to each other, prompting many BMTC jokes of brothers who got down at that stop thinking their names were being called. Pramod closed down and is now Big Bazaar. One hopes it lives on as “Prasanna-Pramod” and not as “Prasanna-Big Bazaar”.

Old city boundary markers still thrive in the form of “Tollgate” bus stops. Depending on the bus you’re in, it could either mean the junction of West of Chord Road and Magadi Road, the point where Bannerghatta Road branches off from Hosur Road, or on Mysore Road, less than half a kilometer before the Mysore Circle flyover.

You might not remember there being Taxis in the city before the autos, but you will still come across a Taxi stand bus stop. Guess where that is? Hint: a completely unnecessary underpass moved it much further up. There’s the India Garage bus stop where Old Airport Road becomes Richmond Road, but is the Garage still around?

Where is the “Jinke Park” near the “Jinke Park” bus stop? I do remember standing on the mound, trying to spot spotted deer, then taking a walk around, feeding fallen Tabebuias to the friendly Sambar deer. The park is now Rajkumar Park, with Sphinxes greeting you at the entrance. But there are no Jinkes there anymore.

Is NGEF still there near the stop? How long has it not been there? On Mysore Road you could smell the biscuits baking from the “Biscuit Factory” as you came near the stop. Kwality’s has long since closed that unit.

Minerva Talkies went down in a blitz of litigations against the government, but still lends its name to the junction and restaurants around it. The next steel flyover agitation might be for the one from Minerva to Town Hall, but there are no trees to fight over.

You might know it as Indian Institute of Science (IISc), but the bus stop is still Tata Institute. Tiffanys might have closed down decades back, and people might only recognize Café Coffee Day Square and UB City, but the junction is still Tiffanys circle.

And keeping with the times, the ORR lends its company names to bus stops – “JP Morgan”, “EMC”, “Cisco”, “Intel”. JP Morgan might decide to move elsewhere in the city, but the name will continue to live on. This might be the next generation of companies that will contribute names to bus stops with no presence in the vicinity.

Given this proclivity for names to persist well beyond the lifetime of the actual landmarks, I naturally assume that some names might be of places that don’t exist. I was surprised to find an actual “Tin Factory” near the stop, but the “Central Silk Board” is hard to miss, and so is Jayadeva, but that’s a newer facility. Uma Talkies still stands near Chamarajpet, so do the Ramakrishna Math and Rama Mandira. There might come a point in time when these business/landmarks move and no longer exist there, but the bus stops will continue to bear those names, nostalgic reminders of an earlier time.

How many such stops form part of your commute? How many of those landmarks do you remember standing? Share it!

City of the future

If you wonder about Bangalore, how the city used to be and where it is headed, this is the piece you must read. Despite divisions, the city appears to be miraculously free of the fatalism seen elsewhere.