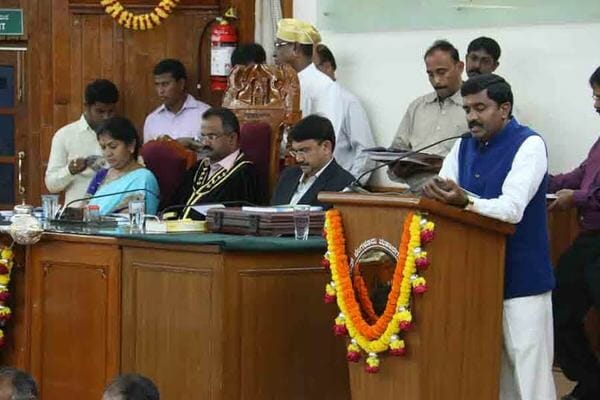 The ruling party in BBMP, Indian National Congress which used to criticise the Bharatiya Janata Party till last year for presenting unrealistic budgets, faced the same allegation this time, from the BJP which now sits in the opposition.

The BBMP council floor witnessed a heated exchange between Congress and BJP leaders even as the Mayor opened the floor for presenting the budget. BJP corporators who wore black ribbons around their necks, protested against the Council’s decision to hike the property tax.

Opposition party leader Padmanabha Reddy, former Mayor Shantha Kumari and others vented their anger against the Congress-led ruling party’s decision to raise the property tax, which they said would burden the taxpayers.

Mayor Manjunath Reddy tried to convince the protesting group to co-operate with the ruling party to present the budget. He said the issues could be raised and discussed in the budget meetings which are open for discussions starting from Thursday. Finally, the protesting group removed the black flag and paved way for budget presentation.

The budget did not have anything significant, as the state government had already allocated the funds and purpose, in the state budget itself.

Taxation and Finance Committee Chairman M Shivaraju presented the budget which was full of flowery language and anecdotes. He received accolades from the members when he announced a special fund of Rs 10 lakh for each ward that is represented by a woman corporator. 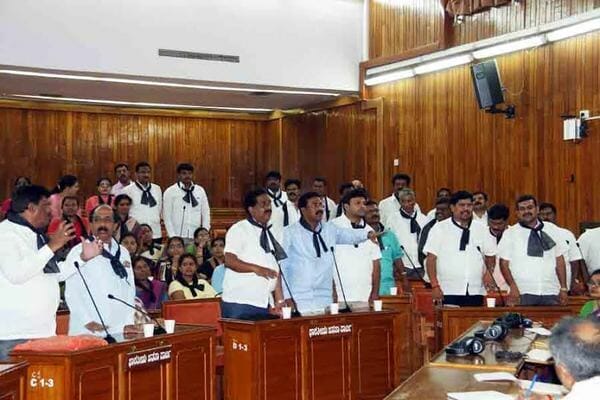 He termed the budget as “bogus” budget. “They are expecting the State government to grant them funds. But, we have seen how much Siddaramaiah’s government has released for BBMP as against the promised amount in the last three years. What is promised is not implemented. Hence Rs 9,000 crore budget is an unrealistic budget,” he stated.

He said that no new works were announced in this budget. They were merely the repetition of last year’s works. Reddy also blamed the budget of discriminating against wards of BJP corporators in allocation of funds.

He used the opportunity to take a dig at the Mayor. He criticised the Mayor for his arbitrary rule and of using foul language to address the councillors. “He uses singular form to address us and doesn’t give us respect,” he said.

However, on their part, Mayor Manjunath Reddy and Taxation Committee Chairman Shivaraju claimed that the budget was realistic. “It is not a Rs 10,000 crore budget. We have planned in accordance with revenue limit. Till last year, the progress of announced works used to be anywhere between 30-40 per cent every year. But this year 80 per cent of the target work has been completed,” Shivaraju told media persons.

Mayor highlighted the accomplishment made by BBMP by freeing two of its buildings from pledge. “In the previous term 11 prestigious buildings of BBMP were pledged to borrow loan. We have repaid the loan amount of Kempegowda museum and Mayo hall. Action will be taken to repay loans of other buildings too,” he said.

However, opposition party leader Padmanabha Reddy didn’t see any achievement in the Congress’s claims of regaining two pledged buildings. “Pledging those 11 buildings is the result of bad governance by Congress when it was ruling the council. Now, they are trying to get the buildings which they had pledged,” he quipped.

Two years ago, BMTC stopped its bus service to Old Baiyappanahalli, a low-income settlement. Recently the youth here surveyed residents, and found they were even facing wage cuts due to increased travel time. The survey has prompted BMTC to rethink its decision

Garbage burning can cause cancer, should be banned: Doctors

With leaf litter often set on fire by the roadsides, along with other trash, Bengalureans are getting affected. Children are most vulnerable, and toxins released during burning garbage affect lungs, according to experts.

Fun things to do with your children this summer

This summer, plan a fun, educational schedule for your children with a variety of activities where you can watch them grow and enjoy themselves. Inexpensive alternative options to summer camps beckon!