How many people in Bengaluru use Bangalore Metropolitan Transport Company (BMTC) buses, which are perceived to be the lifeline of the city, everyday?

BMTC figures say the ridership is 51 lakh. This means BMTC, with its 6650 buses, sells 51 lakh tickets daily from the 70,892 trips it undertakes. Each bus undertakes an average of 5-6 round trips per day.

There are demands for increasing BMTC buses. But will more buses help? Look at the city’s roads – the traffic crawls at such a low speed that even walking can help you reach the destination faster. BMTC buses are always stranded in traffic. Some buses are crowded, while others are empty.

BMTC is making profit of course, only by cutting off the routes that do not make profit. But sometimes, buses do not exist even on the routes that need them, and during the time band when most people travel.

The other day, I suddenly got nostalgic when I recalled how Bengaluru was in the year 2000 – the calm, cool era when Sampige Road had a lot of Sampige trees and Margosa Road had neem trees, where one could walk for hours on the well-maintained footpaths under the canopy of trees. The days when one just got into bus number 63 and sat peacefully for 40 minutes to reach Vijayanagar. Nobody predicted then how things would change in just 18 years!

Recalling all this, as if in a dream, I walked from St Marks Road to Shivajinagar bus stand. The traffic and pollution didn’t bother me because I was on a mission of walking down memory lane. I reached Shivajinagar and waited for bus number 63.

Even after waiting for 30 minutes, there was no sign of the bus. Finally I had to go for another bus that was headed towards Modi Hospital area. The time I spent from walking, waiting to finally reaching the destination was 2.5 hours. If I had used Metro I would have needed just 30 minutes. I realised that bus number 63 had become an endangered species, thanks to the Metro. Namma Metro’s Purple line connects MG Road directly to Vijayanagar, but doesn’t travel on the same roads as the bus, and doesn’t have the same stops.

The buses that are headed to Laggere, R T Nagar, Sanjayanagar, Kaval Byrasandra, Jalahalli, Basaveshwaranagar etc from Shivajinagar still have passengers, while buses going to Peenya, K R Puram etc were almost empty. This could be because of the nature of connectivity these places have. This also tells us why BMTC is not the preferred mode of transport for many within the city and to those going to areas where there is some alternative connectivity like train or Metro.

When the status of BMTC buses within the city is like this, why would anyone prefer BMTC buses if they have another alternative, or can afford autos or cabs? Isn’t it too ambitious to expect people to waste time on BMTC buses?

Interestingly, BMTC’s 6600 buses are not the only buses operating in the city. There are 48,899 buses registered in Bengaluru, as per the data from Transport Department for November 2018, out of which 12,229 buses belong to educational institutions – that is, almost double the BMTC fleet! The rest of the buses are operated by private and corporate agencies.

These buses from educational institutions make two trips per day, to carry the students to school/college and drop them back. But there’s more to it sometimes. Ever since BMTC trimmed the number of buses on routes that stop at Race Course Road, a bus from a reputed educational institution has been stopping in front of Bharatiya Vidya Bhavan every day at 6 pm sharp. The bus picks up regular passengers and goes towards Vijayanagar.

This bus is always full, though operating like this is “illegal”. The punctuality of this bus has made it a reliable choice among commuters who wait for it. That the BMTC has not observed this is surprising. All they have to do is to bring back route number 63 during peak hours.

How many users for public transport?

What would be the actual number of people using BMTC? Among the 51 lakh tickets sold by BMTC, there are passholders and regular travelers who change buses to reach their destinations. Each ticket they buy is considered in the ridership, and a person who needs two buses to go and come back ends up accounting for four tickets.

Lakhs of people would have used multiple buses to go to a destination that doesn’t have a direct bus. These commuters would also have taken the Metro, if the bus is a feeder bus. Because of all these reasons, the actual number of people traveling using BMTC everyday would be much less. At a conservative estimate, assuming that the person who takes a bus to his destination, also takes a bus back, the number of commuters using BMTC could be taken to be 25 lakh at the most.

Same with Metro trains – when they say they sell 4.5 lakh tickets everyday, actual number of people who use Metro would be half of it or a little less – let us assume it is about 2.2 lakh.

Railways, within Bengaluru and suburban areas, make about 120 trips per day, and have a ridership of 1.5 lakh approximately. Divide it by two assuming that the number includes return trips, and the passenger figure stands at about 75,000 to 80,000.

This puts the number of people using public transport, that is buses, trains and Metro at a maximum of 28 lakh, in a city of 1.2 crore people.

Add to these the students from the age of 4 to 20, who also need to commute to get to their schools and colleges. What would be their number?

Census 2011 data says that 26.16% of the population in urban areas is currently between the age of 5 and 19. If we assume this population has either school-going, college-going or working people, all of them need to move from one place to another. 26.16% of 1.2 crores is roughly 31 lakh. This is the maximum number of youngsters and teens in 2018. Even if 10% of this is ignored, to account for various reasons, the young population that needs to commute could be 27 lakh. The commute includes walking and cycling as well.

To actually see and visualise the population that might need to travel, look at the data below for age-wise population taken from the Draft Revised Master Plan-2031. The percentage of people in the age group between 5 and 60 that mostly need to commute, excluding a good percentage of women between 25 to 60 who choose to stay home, is huge, and will continue to be huge. 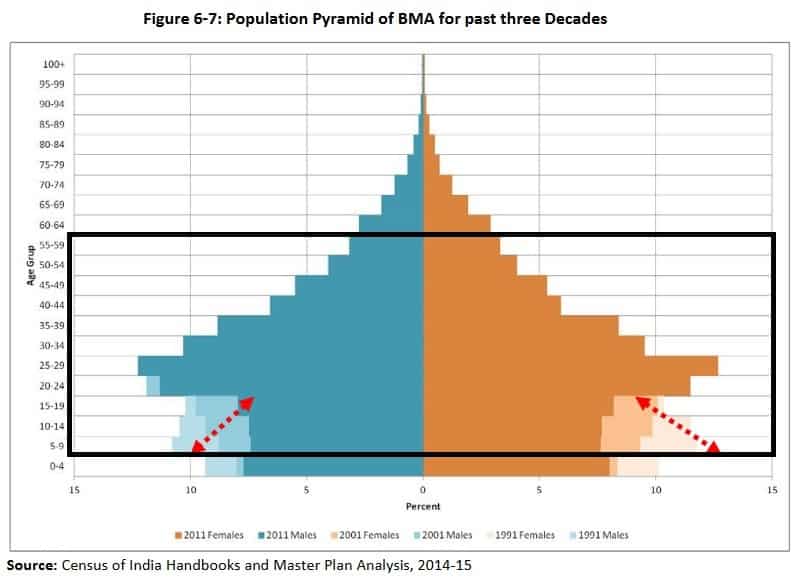 So, here is a population of 77 lakh that needs to travel everyday, and we have a maximum of 28 lakh people using public transport; two-thirds of the population, that’s about 52 lakh people, still depend upon private transport, shared cabs and taxis to commute.

What does the scene look like, for future years?

These numbers further indicate that Bengaluru’s future transport needs will be huge, unless more people shift to work-from-home kind of jobs.

How many private vehicles are added to Bengaluru’s traffic each month? Private vehicle data for October and November 2018 from the Transport Department looks like this:

Now what happens if the city adds more BMTC buses to this melee, without planning in advance? It will end up being a drop in the ocean, due to the rise in private vehicles, competition for road space and lack of robust road infrastructure. Lack of trust among needy passengers regarding the timeliness is just a by-product.

One cannot stress enough on the need for better public mass rapid transport in this city that’s growing everyday. As calculated earlier, the existing mass public transport systems serve only 1/3 of the needy population at best. 2/3 of the population currently needs private transport, and it is hard to change it without credible alternatives.

And here is the city, struggling to meet the demand with more buses and more elevated roads, while delaying Metro tenders, light rail systems, commuter rails and rapid transport projects. The city needs a lot more trains, metro trains and more metro routes which carry more people at good speed, while buses and autos must complement these mass rapid systems instead of competing with them.

Planning the city’s transport without taking all these facts into account, and without creating credible long-term public transport infrastructure for lakhs of people in the city, is going to only add more private vehicles to the roads, and will cost the city a lot in the long run.

Note: The figures assumed here are approximate only, keeping in mind certain conditions explained in the text. Opinions are author’s own.

This fortnight’s neighbourhood news roundup – Beware of fake police on the streets; Hole in the wall at Jayanagar bus-stand.