Have you wondered about the advertisement boards that we see on our roads and medians? Most of the time we curse them silently for spoiling the skyline or worse, blocking our line of vision while crossing the road, and then move on. We assume that some official body gave them an ill-conceived permission.

When the number of such boards in Bellandur ward became too much to bear, to the extent that they were causing fatal accidents, we met the Special Commissioner for Property tax and Hoardings – V Rashmi Mahesh on March 27, 2016. And guess what we learnt? Of the countless billboards in our Ward alone, not a single one was authorised!

We realised property tax collection is at the root of development, and it is in our interest to ensure that users of commercial billboard and hoardings also pay due taxes and do not deface of our public spaces.

If officially authorised, these boards would have brought in crores by way of income for BBMP that could have gotten channelised for constructive work in our ward. More than Rs 4 crore in revenue was recovered recently from the penalty on just 69 hoardings in Bommanahalli alone by officials who did their work. And BBMP claims it is bankrupt! 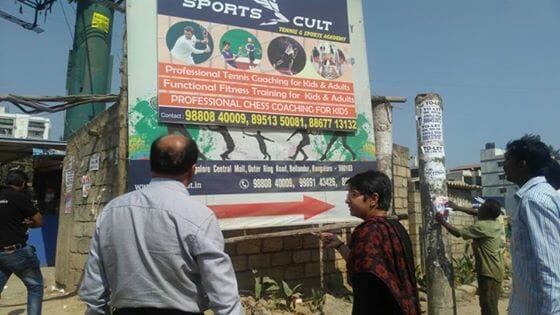 As Special Commissioner Rashmi told us, unless active citizens follow up, this revenue leakage will continue. We have a few good officers in this country who are working against the odds and they need more citizen activism and support to continue their good work. If enough people shed their indifference and devote even two hours a week to any one stream of civic work, we can make a big difference in the things that affect our daily lives.

Citizens of Bellandur ward formed a volunteer group that communicated with Rashmi V, Parameshwaraiah, the Chief Engineer of Mahadevapura and other officials via Whatsapp and email.
We made a database of all the illegal boards in our neighbourhood and updated the officials. We also conducted a few board removal drives where citizens personally removed advertisement boards within arm’s length, supported by the BBMP’s labour team.

The big display boards were hard to tackle. The administrative process to remove them is tedious. It involved collecting removal charges and penalty due to the BBMP as well as to BESCOM for power provided. We had to lodge FIRs against the agencies responsible for the offence and file complaints with the Bangalore Metropolitan Task Force (BMTF). Also, this process involved action by multiple officials and that added to the lag.

In the meantime, one of our volunteers wrote to Decathlon Bangalore informing that their advertisement displays were a safety hazard and illegal as well. Some of us personally talked to the store managers too. To our Facebook query, Decathlon responded saying that they had followed due process, but would recheck.

Thanks to all these efforts, we have finally seen action on the ground. On September 27th, the BBMP team, ably assisted by our local ‘never-out-of-action’ Traffic Inspector Rao Ganesh, pulled down all the poles in the median on Sarjapur Road on September 28 to give us safer, clearer roads. Thanks to the Special Commissioner, Chief Engineer, Traffic Police, BBMP zonal officials and their labour team for making this happen. 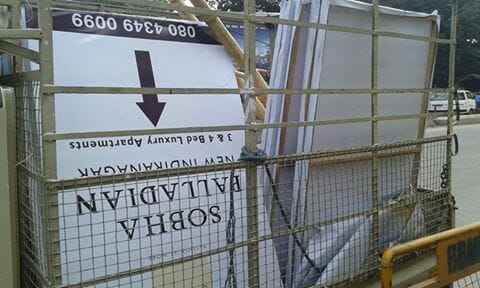 A vehicle with real estate ad banners spotted by a vigilant citizen was seized, by prompt action by BBMP Special Commissioner Rashmi and Mahadevpura Chief Engineer.

Our request to big corporates, real estate giants etc: Please keep road users in mind and make sure your advertisements do not hinder safety. Make sure they are legal. Adopt social media and print/online media advertisements instead of these ugly structures marring our skylines.
Our request to our fellow citizens: Choose to engage, not complain. It works. Taking responsibility for your road, your street, your neighbourhood does change things. The next time you see a vehicle putting up these boards, inform BBMP officials and elected rep, and share with your citizen groups, with the location and vehicle registration number immediately. Adopt one street or more and keep track of its maintenance.

As Spl Commissioner Rashmi told us, unless citizens actively follow up, this revenue leakage will just continue and generate a mafia of its own. There is always something that each of us can do to make things better. Choose to be a positive force. Cheers to more citizen activism and a better, safer city! 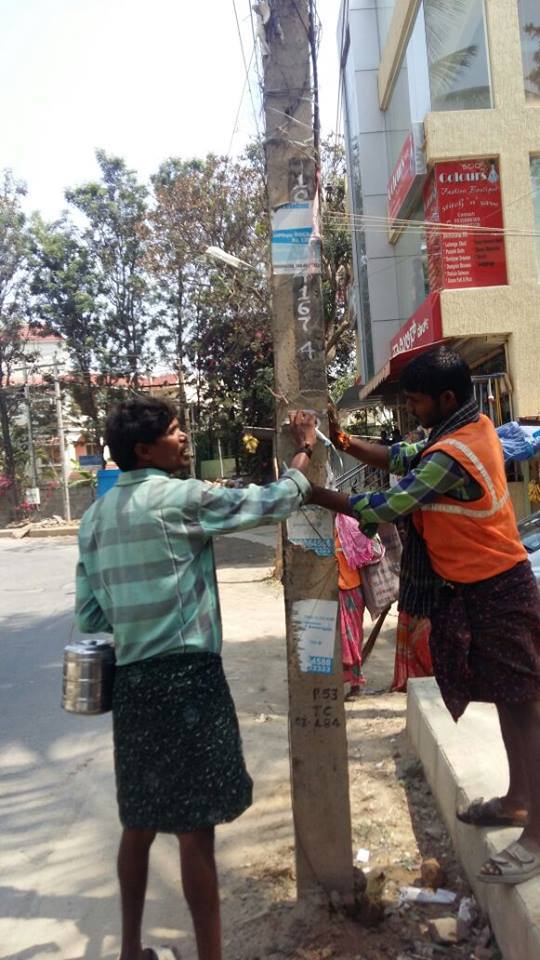 Ugly pamphlets getting removed. May their tribe not increase.

One sobering note: Some of these display boards turned up again in a few days after their removal. But we are working on it. It takes time and effort and a lot of follow up. We are not giving up!

About Meera Nair 5 Articles
Meera Nair is a Bengaluru-based writer, translator and active citizen of Bellandur.

Sandalwood Star Chetan Ahimsa on being an LGBTQIA ally

A strong advocate for the LGBTQIA community, Sandalwood Actor Chetan shares his thoughts on supporting them.

BBMP has allocated only Rs 50 crore for Covid management in this year’s budget. Will this be enough?