G Padmavathi (56), a 4th time Congress corporator from Prakash Nagar ward, took charge as the 50th Mayor of Bengaluru in September 2016. She is the seventh woman to assume the coveted post. On a Wednesday at around 3 pm, she arrives at her chamber to make herself available for visitors. She is at her office after a long day of field visits and attending events across the city.

A group of residents wait in a corner to invite the Mayor for an upcoming event. Meanwhile, a batch of auto drivers arrive at her office to submit a memorandum requesting to fulfill their demands. In between, a few citizens throng the Mayor with requests to get her recommendation for some work or the other. A woman from a deprived family wants her help in getting a job. Another woman struggles through the crowd and reaches the Mayor to appeal for a house to be sanctioned by the Karnataka Slum Development Board.

Amidst the hussle bussle inside the cabin, the Mayor tells me, “you have been seeing me for past one hour. I am not wasting a single minute, right?” I nod in agreement. 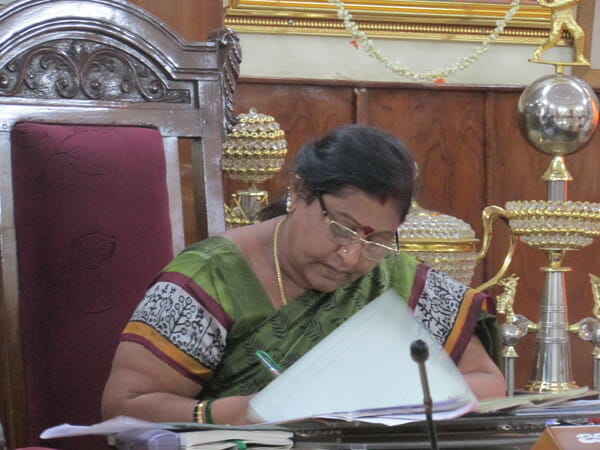 Mayor Padmavathi says that her workday starts at 6 am and ends at 10 pm. “I don’t take a break in between,” she tells as a matter of fact. During the conversation, she clarifies that she does not wish to use “the woman” tag when it comes to work.

As Bengaluru’s Mayor, G Padmavathi is halfway through her administration term; she speaks about her challenges, achievements and issues plaguing Bengaluru.

How has it been for you to manage the council where majority of the corporators are from BJP? Do they support your decisions?

It has been quite challenging. They (BJP corporators) are not supporting our decisions. Though Congress has no majority in the council, we are working unitedly with the JD(S). The coalition rule is helping us pass resolutions.

As soon as I assumed charge as the Mayor, I told all 198 corporators that we have wasted last one year by protesting in the well of the house and have not been able to carry out any work. I appealed them to cooperate during my term in the interest of Bengaluru keeping out the party differences. I am elected as a corporator for the fourth time and I have seen how the council meetings used to be held in 1990s. Councillors were actively participating in council meetings and were arriving at decisions after thorough discussion. I wanted the same to happen during my administration too.

In last five months, I have done my best to manage the meetings and make them productive.

What does it feel to be a woman Mayor? How has the co-operation been? Does a woman Mayor get treated different from men?

I haven’t faced any discrimination being a female corporator or Mayor. In fact, I don’t demand any extra advantage for being a woman Mayor. I believe that every corporator has equal rights. I can manage with whatever power I have been vested with.

What is that one thing that you would like to be remembered for as a Mayor of Bengaluru?

Not just one, I have a few concepts for social good which I want to implement during my tenure. First is a Clean Bengaluru. Second, to introduce self-employment scheme for women. Third, to ensure good food and health for all civic workers, majority of whom are women.

Can you elaborate these programmes?

Clean Bengaluru is to eradicate blackspots. To realise this, I have already introduced micro-planning. The BBMP has deployed one auto per 750 houses and one civic worker for every half km. Earlier, one auto tipper used to cover over 1,000 houses which was not sufficient at all. The new system allows better waste collection and segregation. We are also hiring retired soldiers – clean-up marshalls for each ward to tackle garbage issues. These marshals will monitor garbage collection and clearing of blackspots every morning 5 to 9 and evening 8 to 12. Each of them will be paid Rs 45,000 per month for their patrolling work.

Civic workers ‒ 27,000 of whom are women are often neglected. Hence, for the first time I have introduced regular health check-up. We are also providing them free lunch everyday.

I will introduce self-help employment scheme for women in the coming budget, (however) I cannot divulge details.

BBMP’s budget is round the corner. Will this year’s budget be any different from previous years? The budget is often criticised for being unrealistic and over-estimated.

We are expecting more revenue this time because of an increase in property tax collection. We are also expecting more revenue from advertisement hoardings. So far we didn’t know the total number of properties in Bengaluru but with the introduction of Geographical Information System (GIS), it has been made possible.

Has the digitised property tax mapping been helpful?

Yes. We have found out that there are 19 to 20 lakh properties in Bengaluru. Soon we will identify the tax evaders and reach out to their doors to forcefully collect the pending tax amount.

Quoting the Economic Survey 2017 Finance Minister Arun Jaitley said that only 5 per cent of the properties are paying tax in Bangalore. What’s your take on this?

State budget too is round the corner. What is that you expect from the State to give to BBMP’s kitty? Do you think you will get better funding as your party is in the State?

Yes. I expect good grants from the Congress government. Even last year the Chief Minister set aside Rs 7,300 crore for the development of Bengaluru. This year too I am hoping for a good share, specially for completing the infrastructure projects like – 8 lane corridors, grade separators, signal free corridors, underpasses, flyovers. I want to complete all the ongoing road infrastructure works before my tenure.

BBMP’s liability is close to Rs 4,000 crore. How are you going to repay it? Any plan in place for say, next two years?

We are slowly clearing the liabilities. The BJP council during their tenure had mortgaged several properties of BBMP. After we came to power we have been clearing those mortgaged properties. We have already cleared Johnson’s market. Will do it one by one.

In the first week of January, BBMP Commissioner submitted before the High Court that all illegal advertisement hoardings in the city will be removed within 2 months. What’s the progress? Are the agencies responding to your notices?

We have removed almost all the displays of illegal advertisement hoardings. The challenge is to remove the metal structures. That’s a major work which needs men and materials, hence we have called for tender. We are also ensuring that FIR and chargesheet is filed against the defaulters.

One work that you would take it as a challenge?

To improve the condition of dhobhi ghats. There are over 30 dhobhi ghats in Bengaluru and I have visited all of them and have realised that they need a good working condition. Even though the city has developed, dhobhis are functioning in an old-styled way – often their hands bleeding due to excess use of detergents. I want to upgrade all of these dhobhi ghats into hi-tech washing places. I take it as a challenge to improve their condition in my term, by allocating special fund in the budget.

What do you expect your report card to be?

I want to be excellent in all aspects.

What are the top three things you would want the next mayor to look at?

Sixth standard-student Rohit Rao shares his experience about a recent trip to Mysore and says it has been the best one in his action-packed summer holidays.

I have this thing for pavements. Actually, I have a thing for many things, but the current thing is pavements. Let me tell you, this was not something I took to in a rush. It