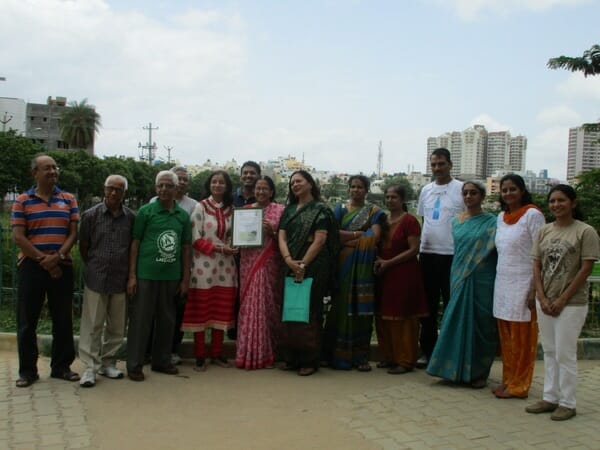 Around 30 volunteers with the Puttenahalli Neighbourhood Lake Improvement Trust (PNLIT) spent the morning of March 28th hauling bags of trash out of Puttenahalli Lake. On April 22nd, Earth Day, they were announced as one of six winners for improving their neighbourhood. The competition, called शहर GREEN करो – It’s Our Turn to Lead, was hosted by Earth Day Network-India (EDN-India). The EDN Country Director for India, Karuna Singh, was present to hand out the award. She praised the initiative and PNLIT’s professionalism .

“The main criteria for choosing the winners was the impact of their actions,” Karuna said. “We thought it was just fabulous that the residents of the neighbourhood came forward to restore the lake.”

For their entry, PNLIT submitted photos and a description of the March clean up, which lasted four hours and involved volunteers of all ages. They competed against 220 other entries from 45 cities across India, with projects ranging from painting murals to planting trees. Usha Rajagopalan, a trustee with PNLIT, received the award on behalf of the trust on Thursday July 16th.

Usha heard about the competition through mail from EDN-India. Last year, she had contributed a piece about the lake to an EDN-India book called ‘Pathways to Green Cities’. When PNLIT entered the contest, she said they weren’t bothered about the result, but were hoping to earn some recognition for their volunteers.

“We know very well that even though we have removed the trash, there is going to be more trash… the weeds will grow,” she said. “We don’t want them to feel disheartened. We want more and more people to come and participate and get the satisfaction.”

The last clean up before Puttenahalli receives water

Besides removing trash from the lake, PNLIT also received confirmation from the Karnataka State Pollution Control Board (KSPCB) on March 28th that the lake would be the first in the city to receive treated sewage water from an adjacent apartment complex. “The fact that they were able to get this treated water to fill the lake, is a fabulous example of how citizens can work with municipal corporations,” Karuna said.

For Usha and others at PNLIT, it was a day that was long awaited. “I knew that eventually we would get approval from KSPCB. If we are diligent custodians of the lake, then I don’t see why we wouldn’t be given permission,” she said. The approval came after the treated water was tested and met state sanitation standards.

With the lake filled, the focus will shift from maintaining the lakebed, to keeping the lake free of litter and weeds until it reaches capacity. 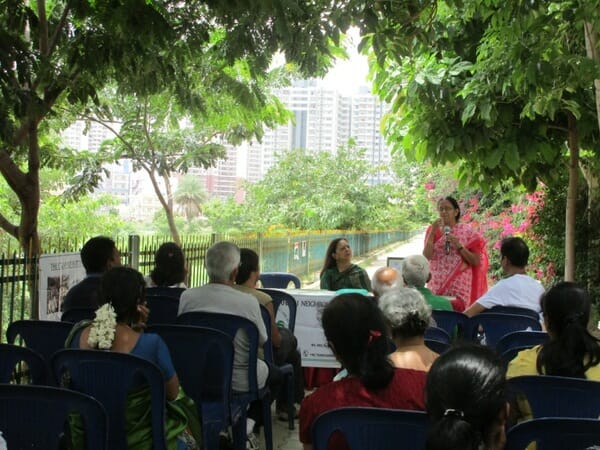 “I call it a ‘lake-in-progress’. I don’t know if it will ever be a finished job,” she said before adding, “In urban spaces, a lake, a forest, any open space will never be able to take care of itself. It needs people.”

How did Puttenahalli get to this point? 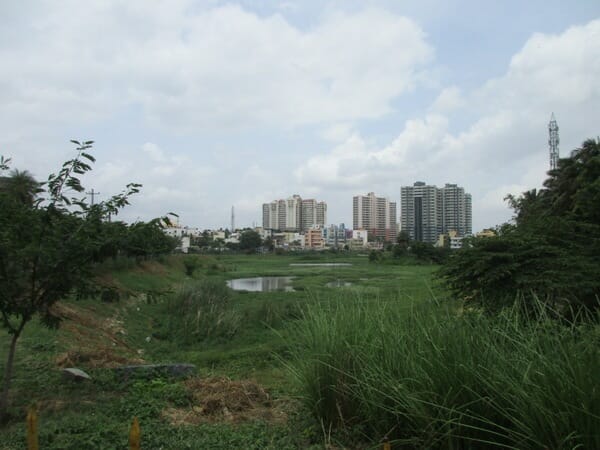 Today, Puttenahalli lake is home to over 70 species of birds, a fenced walking path and a number of lush trees. In July 2010, PNLIT volunteers planted their first batch of saplings on the lakebed. In 2011, they signed their first Memorandum of Understanding (MOU) with the BBMP, which named the citizen group as the official custodians of the lake. While the BBMP would still own the property, PNLIT would now be responsible for its care.

According to Usha, this was the first time a citizen group signed an MOU and assumed care of a lake in Bangalore. Usha said, “It’s a huge responsibility for us, because people are waiting to learn from us. If we fall, it’s going to be a lot of mud on our face. But we don’t think about it along those lines, because we are very clear about what we want to achieve and how we want to achieve it. We get donations from the neighbourhood, so we are accountable to the neighbourhood, and we’re acting on their behalf.”

She said she hopes that more people will join the PNLIT. She added that she has already seen signs of interest from citizens living nearby. When a sewer tank imploded in the street nearby, and sewage began leaking into the lake, residents were vigilant about stopping it. “A number of our volunteers and people living living near the lake, they started calling us up: ‘Sewage is coming into the lake, please, we should stop it.’ And these are people who would earlier have been quite indifferent,” she said. “We were elated, because it showed that our interest in sensitising them, in making them vocal, no longer being indifferent to their surroundings… it was working very well.”

PNLIT notified the BBMP and contacted the Bangalore Water Supply and Sewerage Board (BWSSB), and the leak was resolved in just over two weeks. Last year, the MOU granting custodianship to PNLIT was renewed.

“Our agenda has always been to engage the community, we don’t want platitudes, we want people to participate,”  Usha said.

Workshops, photography trails, storytelling sessions, organic food and a lot of fun – this is what Kakondrahalli lake festival witnessed.

Justice N K Patil report gave recommendations to protect lakes of Bangalore. Even after a year, the state has failed to form lake protection committees. Now the state government is facing Contempt of Court case.

In pictures: Ganesha, after the Habba

During Ganesha Habba, there are grand processions to neighbourhood lakes to immerse the idols. But what happens to them once the festival is over?